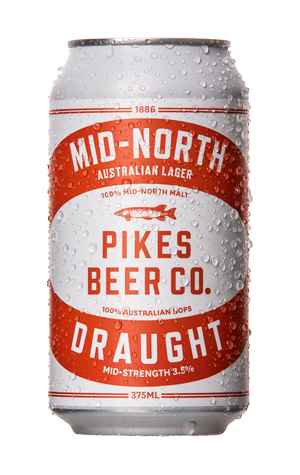 The Clare Valley region boasts an abundance of quality raw materials, and is best known for its riesling grapes and the wines from which they're created. In 2022, however, Pikes (who know their way around a riesling too) decided to champion another local product: barley.

Mid-North Draught is a mid-strength lager and, while it may sound like a simple beer, the reality is far different. You'll find elements of classic lagers in this flavoursome offering (Pikes Pilsener is a cracking Euro-inspired lager so they have previous in this area). Don’t let the 3.5 percent fool you either, as there's nothing watery about Mid-North; this light gold lager brings some spice upfront early on alongside a little earthiness and a touch of honey, before finishing dry, crisp and clean.