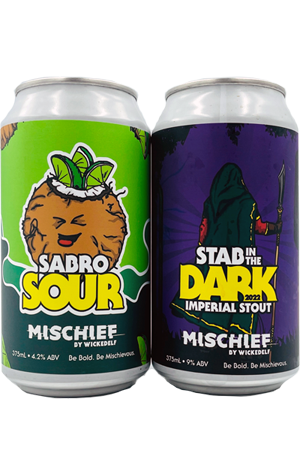 One can get up to mischief in all manner of ways – how boring would life be otherwise? – and such a mindset seems to be at play for Wicked Elf's offshoot label Mischief. After all, you won't find two beers much further apart on the beer sphere than this pair.

Since taking up the head brewer role in Port Macquarie, Ryan Nilsson-Linne has shown a fondness for releasing sours. Typically, they've been of the ubiquitous fruit-flavoured variety, but here he's chosen to showcase one of the hype hops du jour. If you're reading this site, you'll have come across Sabro's tropical-lime-coconut stylings in many a beer, although most likely hazy pales and IPAs. Set upon a Berliner weisse base with limes from the Central Coast and toasted coconut, it gives Sabro Sour a sprightly, sherbety lightness on the nose that reminds me of some of the earliest Berliner weisse produced in Australia, such as Boatrocker's Orange Sherbet collab with To Øl. I picked up Sabro’s more lime-citrus side here – I guess the light acidity in the base beer has little truck with coconut in hop-derived or toasted form – in what's effectively a tangy lime and soda for grownups.

A million miles from that is Stab In The Dark, a beer some will remember from the days of The Little Brewing Co. Back then it was an imperial porter; here, it's reinvented as an imperial stout ('cos Ryan loves them) that does what you'd expect of such a beer. Pouring an oily, impenetrable black, you can grab your imperial stout bingo card and cross off bitter liquorice, thick molasses, bittersweet chocolate dessert, some fruity booze, and plenty of strong espresso-esque roasted bitterness.