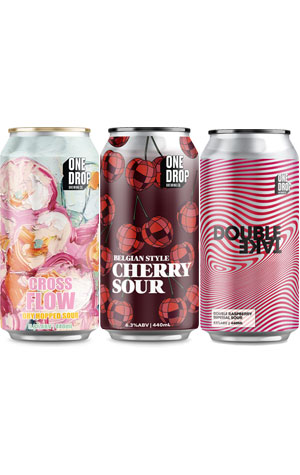 OK, no mucking around. This is serious business. This is beer we’re talking about! One Drop beers to be precise. There simply isn’t enough time to be waxing lyrical about unrelated bullshit for no reason. I mean, there’s six of them for God’s sake. [Although we'll run them over two posts to keep things relatively bitesized – Editor]

Cross Flow is a dry-hopped sour brewed in collaboration with Bosnian-born Australian artist Alesandro Ljubicic. Ljubicic, known primarily for large, bright canvases of floral arrangements, is a fellow Botany creator. The brew team at One Drop have done a wonderful job of creating a beer that almost perfectly encapsulates Alesandro’s works. Pouring a hazy gold, Cross Flow starts with pineapple, lemon, mandarin and white grape thanks to a Citra/Nelson Sauvin hop combo which complements the style perfectly. The palate is bright and lean with a moderate tartness, mild bitterness and a refreshingly dry finish. A really lovely beer.

Keeping on the sour theme but moving back into some classic One Drop experimentation, the next beer is their Belgian Style Cherry Sour. Here, they’ve layered a Belgian yeast strain with another three types of souring bacteria to give a heavily fruited sour a bit more complexity. The resulting beer is a really cool example of subverting your assumption of what’s coming.

Thanks to what I’m sure is an obscene amount of cherries combined with fresh cherry juice post ferment, I had assumed that, by looks and smell alone, I was going to just get a beer that was all sweet cherries and not much else. However that sweetness never arrived and instead the body is dry and spicy with a relatively restrained tartness. Obviously, the beer is like 80 percent cherries but there’s also a strong almond/amaretto note that carries through.

The following is probably the shortest listing I’ve ever written. Anyone familiar with One Drop’s Double Take imperial fruited sours knows what’s coming here. It might surprise you to learn this year’s raspberry sour is red, sour and smells and tastes like puréed raspberries. It’s also 10.1 percent ABV. How it doesn’t have any noticeable alcohol burn I’ll never understand. Really not sure what else there is to say?