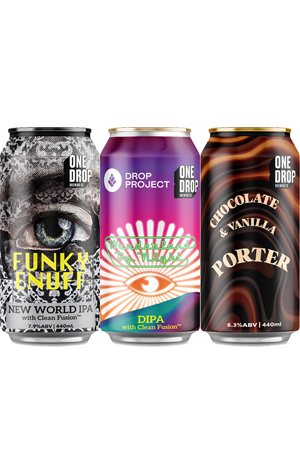 One Drop being One Drop, when we posted the piece on three new sour beers the other day they only represented half of the new releases to have landed in our lap. This trio has been out a little longer, thanks to some bumps along the way between leaving the brewery and arriving a few kilometres away, but they're all still around so...

Starting with the newest instalments in the One Drop Clean Fusion range, Funky Enuff is a big new world IPA hopped with a wide selection of Australian varieties. No points for guessing there’s going to be plenty of Galaxy, but they’ve also thrown in a couple of far less famous varieties in Astra, Melba and Enigma, plus the newish kid on the block, Eclipse. Strap in!

Right from the get-go, you could probably tell me I’m pouring out a can of hop oil and I’d believe you. Looking like a thicker pineapple juice with a fluffy white head, Funky Enuff emits Australian hop aromas so intense you can almost see them. Passionfruit, mandarin peel, grapefruit, lemon – I could probably just reel off another ten fruits and I’m sure you’d find them in there somewhere. Using Aussie hops for bittering can sometimes give a bit of an unpleasant astringency but that’s nowhere to be found here. Instead, it's balanced by the full malt body without any cloying sweetness, which makes it very easy drinking for an almost 8 percent ABV IPA.

The second Clean Fusion release in this clutch is a collaboration with possibly the coolest new UK brewery, Drop Project. Go on, have a quick Google. It’s like if my older brother’s extremely cool friends started a brewery. Anyway, Wonderland By Night is a DIPA utilising an English yeast strain known for producing excellent hazy beers plus a load of Aussie hops. What could possibly go wrong?

Funnily enough, at first glance, even though it’s slightly bigger thank Funky Enuff, it doesn’t pour with the same oily thickness. It is extremely hazy, however, with truly lovely head. The Aussie hop varieties aren’t listed but with the big passionfruit hit, surely there’s Galaxy here. I also found a bit of juicy citrus and ripe mango all over the nose and palate. The malt body is really something; smooth and mildly sweet with a love tap of resinous bitterness for immaculate balance. I don’t know if it’s a better understanding of yeast, malt, hops or all three, but big hazy beers really have come a long way from a few years ago

Now we finish with a bit of dessert. Although, considering most of One Drop’s coterie of dessert beers, this Chocolate & Vanilla Porter is much more subtle on the sweetness than you might expect. Built on a base of what seems to be more of a brown porter than the robust variety, she’s loaded to the gills with cacao nibs and three different vanilla bean varieties.

Everything I’m about to say is going to sound like this is a super sweet sipper sort of beer but I promise it’s not the case. Firstly, the aroma to me sent me back to my days as a teen where every Saturday and Sunday was spent riding our bikes to various friends' houses and eating hot chips and chocolate Paddlepops for lunch. It’s all chocolate ice cream on the nose but the taste is much closer to a Macca's chocolate sundae or Cottee’s chocolate topping. The vanilla is gloriously smooth and the malt base lends a nice choc ripple biscuit vibe with a bottom note of coffee. I don’t know if there’s any lactose here, but if there is, there’s isn’t much. The flavours are intense but it’s in no way cloying and I enjoyed it all the way through.