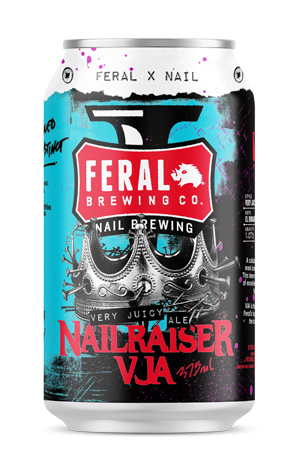 Marking ten years since they originally joined forces to create BrewCorp, Feral and Nail welcome Nailraiser. Given these two WA brewing icons have lived as siblings for 20 years, and shared a brewery for ten of those, it’s a wonder this hasn’t happened sooner. But then again, this is a long way from the then controversial fruity esters of Y2K Nail Ale or its assertive late Noughties stepbrother, Feral’s Hop Hog.

Indeed, the outrage of Nailraiser pouring in any year, bar the last few, would probably equal the tropically humid hype surrounding this release. Presented as Nail's VPA meeting Feral's Biggie Juice, what flows is on trend, with a vibrant orange opacity that emits pineapple-led tropical aromas. Passionfruit hints appear in the glass for what is a seamless, though higher ABV, melding of the originals.

Beyond the liquid, the conurbation of kinship, shared experience and time continues in the form of double-exposed logos which appear almost too naturally – I’ve done a double take more than once. Graphic designers Peche and Zendoke have created an 80s horror-themed can design that even includes credits in the fine print for those looking beyond the liquid fog.

If you're reading this in time, we've snagged three cubes of the limited release beer for our beer club, The Crafty Cabal. You've got until August 31 to enter the giveaway here or via the free Crafty Pint app.

Launching at The Dutch Trading Co on August 12

Then available nationwide in limited release