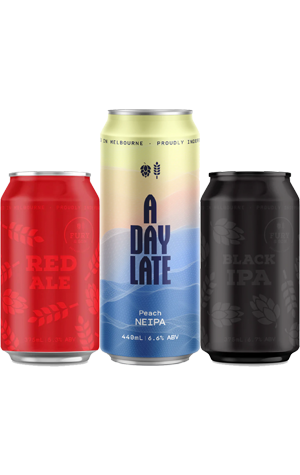 With so many new releases these days pale, hop-driven and usually hazy, it makes for a pleasant change to receive a trio from one brewer that lands in such distinct parts of the colour spectrum. OK, so each of these beers from Fury & Son still features much in the way of hoppiness, but they do take the drinker to different places.

Peach NEIPA looks like one of the OG NEIPAs – pouring opaque as, no doubt aided by the 20 percent fruit nectar in each can. And given you can get peach / stonefruit aromas from many hops on the market these days, the nectar doesn’t noticeably distinguish itself from a broader mélange of fruits on the nose, instead making itself known more when you reach the tangy, grippy, fruit juice-like finish that cuts through the softness with which Peach NEIPA announces itself.

With Red Ale, you have an American rather than Old World red ale in your hands. Visually and character-wise it's not far from an American amber ale: a blood orange / amber pour with a weight and intensity in keeping with its 5.3 percent ABV. Dark citrus from the hops meets toasted caramel and biscuit from the malts, while a drying, lasting bitterness sees off any upfront sweetness.

Back when black IPAs were first a thing over here, most brewers aimed to keep all obviously "black" characteristics on the lowdown – colour excepted. There was an early example that eschewed that and went big on everything: Kooinda's Full Nelson. And while Fury & Son's Black IPA isn't as in your face as that old-timer, it's definitely not afraid to let the darker malts play. Floral, piney, herbal hops go to war with deeply dark couverture chocolate and a dusting of cacao. In the glass, it's more dark brown than black (unlike its Metallica album cover-esque cans) but hits the dark in colour + hopped up requirements of the style regardless.