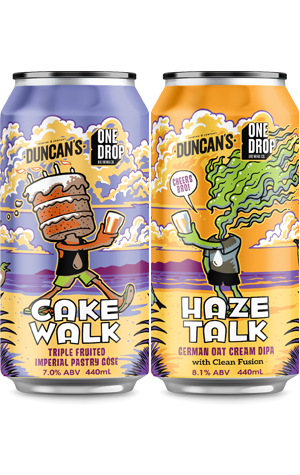 Another week, another One Drop double release. This time around Botany’s wizards of weird have teamed up with their spiritual siblings, Duncan’s Brewing Co, from the Kapiti Coast on the south end of Aotearoa’s north island. In much the same vein as One Drop, Duncan’s are capable of nailing straight up classic beer styles but seem to spend most their time creating the type of beers that make most people happy but a certain subset of the beer-loving public extremely angry. The two collaboration beers released this week are absolutely no exception.

It seems like it’s only been in the last couple of years that we’ve actually been able to appreciate just how lovely German noble hops can be. With fresh Bavarian and Italian style pils being released all over the shop there’s never been a better time to be able to appreciate the beauty of the old world hops. It was only a matter of time before we got ourselves a German IPA but I didn’t expect it to be an oat cream double.

Haze Talk is One Drop and Duncan’s crack at marrying the old with the new: German malts and hops, a Munich water profile blended with One Drop’s hazy yeast, and a veritable entire cow's worth of lactose. The nose is a truly unique mix of noble hop and sweetness. A lovely pronounced floral note, a touch of earthiness and late spice sneak in before the lactose starts to assert itself. The malt presents itself like white bread drizzled in caramel. Like the aromas, the hoppy spice weasels its way in, but the overall impression is one of bready sweetness. Thankfully there’s a decent hit of bitterness to push against the oat creaminess and just about manages to balance it out. Look, it’s not the German IPA I’ve been wanting, but I’m glad it’s finally happening.

If I’m going to be totally honest here, of these two beers it certainly wasn’t the triple fruited imperial pastry gose that I thought I was going to really enjoy. But, by crikey, I slurped up every last drop of Cake Walk and went looking for more. It’s testament to the brewing prowess of both One Drop and Duncan’s that they’ve gone and made what is frankly, a completely silly beer that is utterly delicious and fun in every way. Even for an old cynic like me!

The triple fruitedness of Cake Walk comes from healthy additions of mango, banana and dragonfruit. These fruits not only form a brilliant combination of breakfast juice flavours, they also turn this beer into something that would probably kill a German master brewer with a single glance. I don’t think I’ve ever had a beer that poured like it was halfway between two different phases of matter. Cake Walk is so thick, that I’m still not convinced it can’t be walked on.

It not only smells like freshly poured breakfast juice, but also cake batter and advocaat, the Dutch egg liqueur. Seriously. This theme continues with a batter-like mouthfeel of vanilla, banana, mango, kiwifruit and just a hint of salinity. I can’t believe I’m saying this, but Cake Walk is perfectly balanced. Despite all appearances, it's really not that sweet, and when combined with a mild tartness and just a smidge of bitterness, it’s genuinely one of the most delightful beers I’ve had in months. It’s immense fun and I’m kinda sad I don’t have some more.

For more on the world of pastry beers, check out our two-parter here and here.