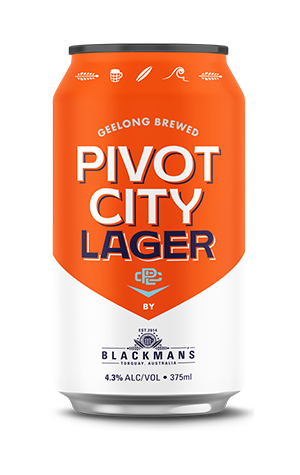 Ballarat and Bendigo might be known for their gold but Geelong once played a - excuse the pun here - pivotal role during the Gold Rush. The deep water in this part of Port Phillip Bay made the city a natural shipping hub and as the railways built up too, the area known as The Pivot became an essential point where goods and gold were shipped from Barallat and the Western District to the rest of the world.

You'll still find names and references to that history around the regional city and even the Geelong Football Club were once known as the Pivotonians. Joining that esteemed history is Blackman's Brewery's Pivot City, with the Geelong-brewed lager with local malt and Enigma hops the kind of beer you'd hope an entire city could get around. It's light on the palate, crisp and sessionable while still providing a bitter kick, gentle floral hops and a touch of citrus. And while long rail journeys might be less common today, it would certainly suit the long and arduous train ride between Melbourne and Geelong.

If you'd like to enjoy a fridge full of the lager and the fridge too, the brewery's currently running a competition to win one. Details are here.