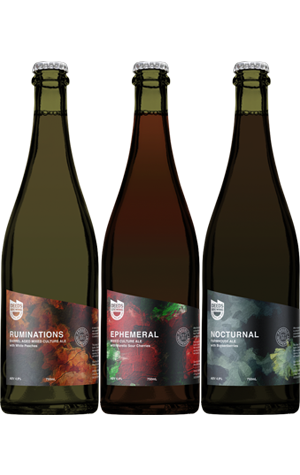 As Deeds Brewing release another flurry of beers from their mixed culture program, it seems they're on a mission to prove it's not just good and bad things that come in threes, but barrel-aged and blended fruity beverages conceived in Glen Iris too.

When tucking into the third triple launch of such beers, I figured the one featuring white peaches would be the gentlest starting point, and when Ruminations landed in my glass looking as witbier-esque as a beer can look it felt like I'd chosen wisely. However, it didn't take long to be disabused of that notion – or to be transported to a different part of Belgium's beer landscape. The liquid is a blend of saison and mixed culture beer aged in French oak for 12 months before being macerated on Yarra Valley white peaches for a further four months, a process that delivers funky phenols riding atop the sticky peaches. That phenolic perfume sticks around too, accompanying the acidic sweetness punctuating the beer's peachy flesh flavours.

Ephemeral sees the brewers returning to some sour Morello cherries that had already been used in prior releases, meaning their contribution – while still the defining feature – is more restrained. Pouring a crimson-pink, it's light in every sense, reminiscent of an easy-going French table red: refreshing more than funky with a gentle sourness alongside clean cherry aromas.

It's a similar tale with Nocturnal, which features second use boysenberries that spent ten weeks in the brewery's Petite Saison. It's not as intense as past releases starring the fruit yet still a step up from its cherry companion in colour, fruit depth and sweetness, and spritziness. Again, more an easy-going refresher than the sort of mixed culture beer to drive chin-stroking pondering, it's one I can see going down a treat as a sparkling shiraz substitute at picnic.