Beer One Drop Wake Up & Triggered 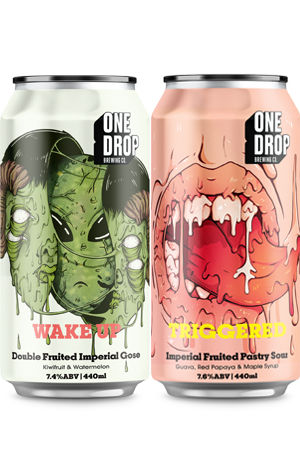 One simply does not walk into Botany and ask One Drop for a nice dark mild or hefeweizen. There is a mad genius there that does not sleep. It is a dazzling wonderland, riddled with lactobacillus, fruit purée and vanilla. The very air you breathe is dusted with lactose. Not with ten thousand people could you do this. It is folly.

What is interesting about both of the new beers here is that they’ve had their respective fruit juices added both during fermentation and at canning. Fermentation tends to both dissipate and transform a lot of flavour and aroma compounds from fruit (and almost everything else). Some fare better than others, but fermentation changes how fruit comes across in the beer. By adding some post-fermentation, you’re going to help freshen up the fruit character but you’re also introducing unfermented fruit sugars into an already pressurised container. Give those cans a bit of warmth and any remaining yeast could get to work. That’s just a very long-winded way of saying please follow the storage instructions on the label and keep these bad boys cold or you might have yourself a very delicious IED.

Wake Up is labelled as a double fruited imperial gose, watermelon and kiwifruit being the double-up combo in this instance. Watermelon has a strong pedigree as a beer fruit and it shows here, although it’s less a bite out of a freshly cut watermelon and more sucking on a watermelon Chupa Chup. It’s a juicy kind of tartness with the kiwifruit struggling a bit to make much headway against the more dominant melon. At first the salinity is eye-opening, but I found with a bit of warmth it all opens up and melds much more smoothly.

And here comes the pastry! It just wouldn’t be right to go more than a couple of weeks without a bit of vanilla and lactose, so One Drop have delivered in spades with Triggered. Like its stablemate, this beer has a fruit combo a bit out of the ordinary. Guava and red papaya join forces with One Drop’s imperial pastry sour base to create a truly uniquely fun beer. I can’t say I’ve ever knowingly eaten a red papaya before, but along with the guava there’s a clear layer of paw paw. Actually, it’s kinda like a guava and paw paw shortcake with a strawberry jam coulis. Once that’s done with, the addition of the maple syrup slides in at the end and gives a pancake batter vibe. With all this jammy, cakey sweetness, the acidity plays more of a foundation supporting role to keep the whole thing from collapsing in on itself.

NB If you'd like to take a peek behind the veil at One Drop, we're hosting an exclusive Crafty Cabal member event with them and Slow Lane in October – details here.