Beer One Drop On Your Feet & Keep Up 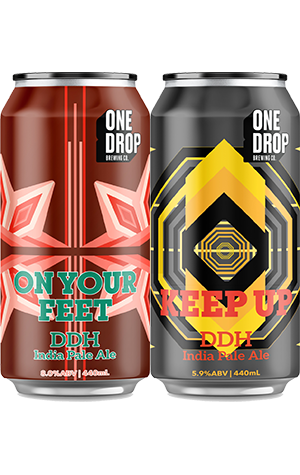 Two hoppy monsters from One Drop here, and of particular note is a DIPA utilising a super-cool experimental hop out of Aotearoa known officially as NZH102. NZH102 has come out of NZ Hops’ Bract Brewing Program in which 60 breweries from around the world have been given exclusive early access to some varieties to see how they perform on the way to finally becoming a fully-fledged, commercially available variety with a good name that won’t have to be changed shortly afterwards due to some sort of trademark dispute.

So let’s start there, dear reader! On Your Feet is an 8 percent ABV DIPA hopped not only with NZH102 but also paired with One Drop favourites Vic Secret and Citra. It pours like a cloudy apple juice with an almost visible fog of hop aroma. I got lychee, lemon/lime, ruby grapefruit, passionfruit, fresh cut herbs and just the slightest hint of cascara. Just from the first sip, it feels like a big, robust beer with a sweet and juicy body and a gorgeously textured mouthfeel. Bitterness is moderate but builds over time. My first impression of NZH102 is very promising but I’d love to see how it goes by itself or in some different styles.

The second IPA for the week is a DDH IPA that’s just shy of 6 percent ABV and comes loaded with Vic Secret, Citra, Cryo Pop and Huell Melon. I guess, technically, Cryo Pop isn’t a hop variety, it’s more of a blend of soluble hyper aromatic hop compounds jammed into a pellet, but who really cares?

Keep Up pours with the pale yellow cloudiness of lemon juice but the initial aroma heavily favours the tropical fruit spectrum. Passionfruit and honeydew melon standout initially, with highlights of mandarin and an earthiness as it warms. On the palate there’s fresh pine needles without the usual accompanying dank resin as the bitterness is held back. The malt body itself is soft and well structured, with the wheat malt in particular laying a splendid foundation. Despite the relatively low bitterness, it feels like a really clean ferment with little residual sweetness to overwhelm.