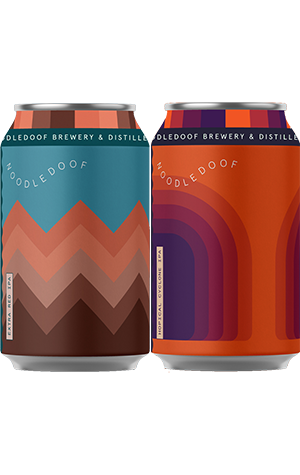 For an operation specialising in tiny batches of glassware destined for the hands of a tiny niche of the beer world, the Boomstick crew don't half get around. Here, they crop up in partnership with Noodledoof, the brewery based in Victoria's west. Together they've created the Extra Red IPA, for which a limited edition glass will follow, of course. It sits in ruddy / chestnut territory and packs plenty of punch on the nose, where hops and malts meet in a red berry-esque middle ground, pushing the citrusy elements of the former and caramel sweetness of the latter to the fringes, before a toasty, drying, piney bitterness wraps things up.

With Hopical Cyclone, the brewers set out to create an IPA that was neither West nor East Coast, but something with elements of both. It looks like the former, courtesy of a spectacular glowing, bright pale copper colour and lasting white foam. Once your other senses get to work, it's a softer and sweeter affair, however, more in keeping with the latter. The Bru-1 and El Dorado hops can be found in the pineapple and a well-judged bitterness, with the experience akin to a pineapple chew or (for those of my British heritage) a pineapple Toffo in liquid form thanks to the enveloping nature of the sweet caramel malts.

There's a launch party for Extra Red IPA at The Fat Goat, Upwey, on November 4