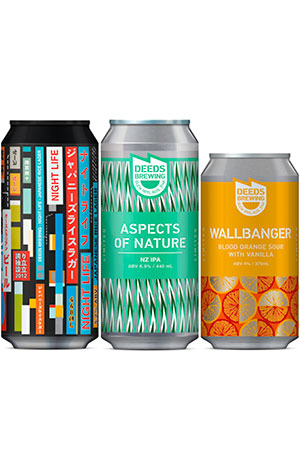 Deeds may have chosen the closing months of 2022 as the time to enter the non-alc space with Zero but that doesn't mean they're going to forego the opportunity to indulge their fondness for experimentation. Night Life is another entry in their ongoing, and typically top notch, series of limited release lagers and is as straightforwardly drinkable as its labels are complex.

The latter capture the feeling of Tokyo at night, the former keeps things simple; even the Sorachi Ace hops that proved a curveball when they first appeared in beers here – and now feel like a precursor of sorts for the neomexicanus varieties that have followed – keeps its weirdness under wraps. Grain led both on the nose and in its lingering flavours, there's a floral side to the aroma reminiscent of noble hops with the Japanese-origin hops contributing subtle lemon/citrus to taste. Crack a can and watch it disappear.

The NZ IPA Aspects Of Nature also sees the brewers playing in familiar space, that of hopped-up IPAs. In this case, it's an all-NZ affair brewed with NZ Cascade, much-loved newcomer NZH102, and much-hyped Nectaron. I've picked up plenty of stone fruit from the latter two in other beers, but this one is expressive in different ways – all orange blossom, grapefruit, candied pineapple, juicy grape juice, and sherbet orange sweetness – with a pithy finish and leanness of structure that ties it all together.

If those two could act as warm up and main course, a beer laden with blood oranges and vanilla surely has to be dessert. That said, Wallbanger wears its fruit and vanilla without much in the way of lingering sweetness. You can't miss blood orange’s unmistakable aroma atop a beer with plenty of pucker, while the vanilla seems to play more of a softening role on said pucker than adding too much in the way of, well, vanilla.