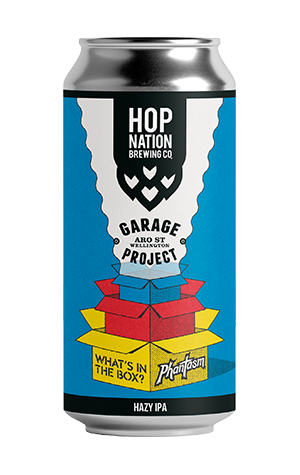 What’s In The Box? A thiol-rich experience of has is what’s in the box. The beer is a collaboration between Hop Nation and Garage Project and is one of the first in Australia to make use of Phantasm. We’ll take a deeper dive into the brewing powder soon but basically, it’s an extract developed by Garage Project’s cofounder Jos Ruffell to boost thiols in beer to add more juicy or tropical aromatics.

It’s a complex side of the world of brewing but you don’t need to understand the science to get that Hop Nation and Garage Project would decide to brew a hazy IPA with the stuff. They’ve also taken some beloved hops from their home countries, Nelson Sauvin (NZ) and Vic Secret (Australia), while adding America’s wunderkind of hazies, Citra (in both Cryo and Incognito form. Even though all those hops do contribute a lot of aromatics, it does feel like there's an extra layer at play here, with really big tropical notes of passionfruit, guava and rockmelon and a really juicy touch of zesty grapefruit, with a dank finish.