The striking comic artwork on Hopzilla features an angry hop cone chested Godzilla-type creature in a rather large disagreement with a giant rabbit that appears to have escaped from a lab experiment gone badly wrong. These two beasts at odds with each other but bound together is a fitting visual descriptor for the two contrasting styles this beer is built on: a hefeweizen laced with the hoppy elements of an IPA. Based on those starting points, this is a beer likely to polarise drinkers. There will… Read more
Pale Yellow 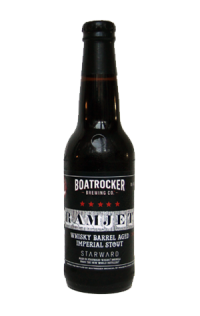 How far, how fast? It's not much more than a couple of years ago that Matt Houghton dropped off a sample of the first ever Ramjet at Crafty Towers. Later that evening, after a planning meeting with members of the Good Beer Week team, a bottle was cracked. Someone arriving late was handed a glass without knowing what it was. "Wow. What's that? That's amazing; I could put away a pint of that," she said. "It's a new imperial stout from Boatrocker. It's more than 10 percent." "You're… Read more
Black Two new releases in the same week for Brisbane's Green Beacon – and they couldn't be much more different if they tried. First to hit taps is The Botanist, their 2016 wet hop ale, featuring Galaxy and Ella hops air freighted to the brewery from Tassie within a day of being picked. They've been added at four different stages to an otherwise pretty straightforward American style pale ale in order to allow the hops to shine, with the brewers describing the aromas as "green and grassy with hints… Read more
Rich Brown 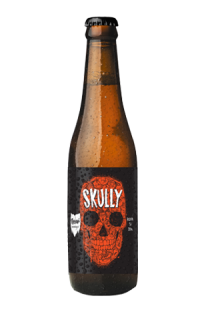 To coincide with American Independence Day 2015, Murray’s jumped on board the celebrations and released four US influenced IPAs: Icon, Black Bear, Fred and Skully. The latter was a red IPA that was well received to the point they had to do another batch. And after that batch disappeared, they were again hassled with: “When are you going to bottle it?” The problem was that even if they wanted to they couldn’t as the requisite hops weren’t available. Now they are and Skully is back again,… Read more
Red 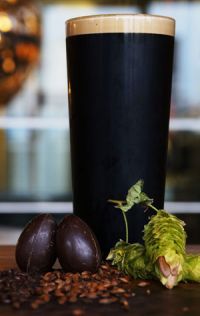 The good burghers of Canberra can get their hands on a fresh hop beer with the release of Reflector by BentSpoke. The beer has been brewed with wet Galaxy hop cones delivered straight to the brewery from the Rostrevor hop farm in the Victorian High Country. It's a red amber ale, comes with a bicycle reflector tap handle to reflect its hue, and its fresh hop character doesn't end when the beer makes its way to the tap; Reflector is being served through the brewery’s bar top infuser known as the… Read more
Rich Brown For the past few years, Bridge Road Brewers has been at the forefront of the push for greater recognition for Aussie hop varieties, particularly those developed by Hop Products Australia (HPA). Alongside its range of single hop IPAs, the brewery's annual harvest beers play a great role in introducing people to the flavours and aromas of varieties being grown in the Victorian High Country and Tasmania. Usually, they feature one or more as-yet-unreleased varieties. However, with the Rostrevor hop farm… Read more
Golden Yellow 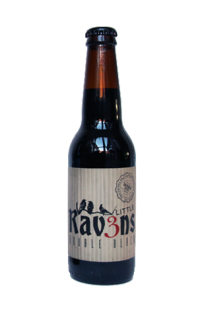 Earlier this year, half a dozen breweries were invited to brew a beer with water from Daylesford & Hepburn Mineral Springs for an event at Ladro TAP. Among them was 3 Ravens, with the Thornbury brewery opting to use Hepburn Springs Sparkling Mineral Water, the attraction being its high calcium content: ideal for brewing "something big and black" with the alkalinity providing an effective buffer against the acidity of very dark roasted and crystallised malts. Given they have an oatmeal… Read more
Black Given they're in Brisbane, rather a long way from the ideal conditions for growing hops, it's not that easy for Newstead to brew a wet hop ale. [For the uninitiated, these are beers brewed with hop flowers that are taken straight from the bines upon which they grow to the brewery without going through the usual drying process.] However, the tyranny of distance didn't put them off; in fact, they went and brewed two different wet hop beers just because. Both are variations on beers from their core… Read more
Rich Brown

And other craft beer venues in SE QLD 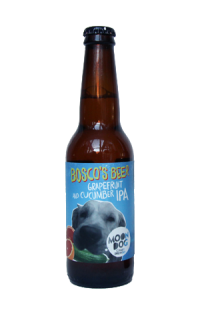 This new IPA from Moon Dog is another beer to graduate from the brewery's weekly single keg specials. It was designed by senor brewer Adrian McNulty and is named after one of his dogs (pictured on the label with a fruity mouthful). As for why it's named after his dog, well, it's nothing to do with a canine love of grapefruit and cucumber, more a case of Adrian not having a name for the beer when the time came to tap the initial keg. From such inauspicious starts, however, came a beer that they deemed… Read more
Golden 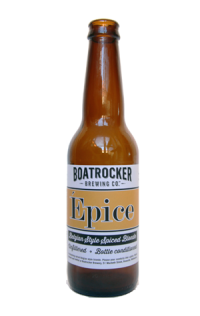 Anyone that called into the 2016 Good Beer Week Gala Showcase and stopped by the Boatrocker stall will be aware that they've got plenty of new beers on the go in various stages of readiness. The combo of in progress beers, ready now beers and been around a while beers saw the Braeside brewery take a fourth straight People's Choice title, with the Epice one of the beers that contributed. It's another beer that looks to Matt Houghton's beloved Belgium for inspiration: a blonde ale that, like many beers… Read more
Golden Yellow 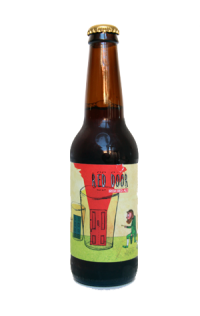 The mission to brew ten red beers to mark ten years of Red Hill Brewery is entering the home straight. This time around, it's another beer inspired by the classic brews of Europe in the form of an Irish red ale. Red Door is beer number seven and takes its name from the famous painted doors of Dublin, which according to the brewers "were said to have began when an eccentric writer painted his door bright red so his neighbour wouldn’t mistake it for his own on his way home from the pub".… Read more
Red 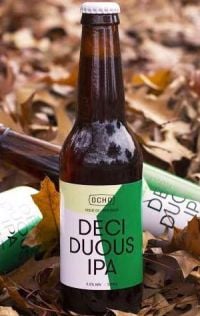 With the largest hop farm in Australia on their doorstep, it's little wonder that many Tasmanian brewers leap at the chance to brew a fresh harvest beer each year – sometimes with their own, home or brewery grown hops. So that's what Ocho did for beer number two, securing experimental hop variety HPA-035 plus some just-picked Ella from Hop Products Australia and adding them to a rye IPA base within 24 hours of harvest. They were added at a rate of 30 grams per litre (in other words: a lot) towards… Read more
Golden Brewer's notes: French Saison yeast is the protagonist through this particular beer. A style at The Indi we love to brew in Autumn, Saison Ethereal has unique aromatics and flavours of ripe lemon, chamomile and herbal spice.… Read more
Pale Yellow 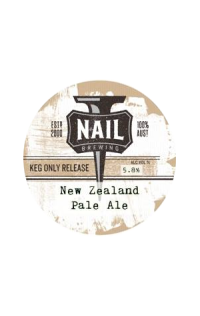 Are you stinging for some Kiwi hops? Then Nail Brewing has just what you require. The WA brewer has snaffled one of the newest hop varieties developed by farmers across The Ditch. It's called Brooklyn (a choice that caught the eye of a brewer from a certain American brewery), was bred from Southern Cross and is described by NZ Hops as a "big hop". As with all new hops, brewers will be playing around to see how and where it works best. For Nail, they opted to use it to create a pale ale,… Read more
Golden What is it with big cans and big beers? It seems local brewers can't resist the temptation to up the booze when they up the volume. Pirate Life's IIPA is probably the best known example but now, as a means of getting its new double IPA to people (and perhaps offer a "nudge, nudge" to people in advance of its own canning line arriving later in the year), Dainton Family Brewery has decided to send the Twisted Twin DIPA out in nigh on one litre beasts. There are kegs of the 8 percent hop bomb… Read more
Rich Brown Given its location within the former Surfrider restaurant building a hop and a skip from the beach in Torquay, there's an obvious connection between Blackman's Brewery and Australia's surfing culture. And, with four of the country's top pro surfers having launched into the craft beer world with Balter on the Gold Coast, the link between the two worlds gets stronger still. So it makes sense that, as the Bells Pro takes place a few kilometres down the road from Blackman's, brewer Renn conjures up a… Read more
Golden As ways of ingratiating one's brewery with a journalist writing about beer, dipping the top of a bottle you plan to present to them half a dozen or more times in wax – laughing while doing so at the impending battle said journalist will face getting into the beer – is an unusual one. Still, it was very good of Dainton Family Brewery to sneak us a bottle of its new Manhattan Ale, even if the resultant battle took up 20 minutes. Perhaps the brewery team was that convinced of the quality of the… Read more
Golden 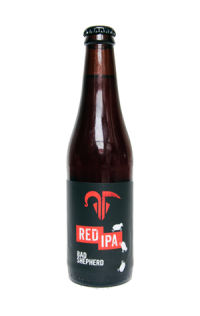 They're wasting little time making a mark on the Melbourne market down at Bad Shepherd. The Cheltenham brewpub has been pulling crowds since opening late last year (when we discovered our last cab driver lived Bayside and told him to check it out, it turned out he'd already been with his family). Already, limited release number two is here. Following the Raspberry Wheat comes a second beer of a red hue, albeit not quite as fluorescent as its predecessor. The Red IPA is another beer that suggests… Read more
Red In 2015, Colonial Brewing Co hooked up with the organisers of the Emergence Creative Festival in Margaret River. The result was the design of the cans for the brewery's Small Ale, the hoppy 3.5 percent ABV mid-strength they'd been honing in draught form for some time. As well as the sweet design, the beer saw them debut the 360 degree, flip top cans that effectively become an aluminium glass once opened (turning plenty of heads when The Crafty Pint and friends popped them in the Supernatural Amphitheatre… Read more
Golden Yellow 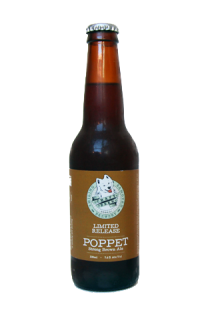 Be honest. If someone told you they were going to serve you a beer called Poppet, you'd be inclined to expect something light and delicate, fruity maybe. If they told you it was named after a pet Samoyed, that would only send you further down that road. Yet the annual Poppet release from South Australia's Smiling Samoyed is anything but light, delicate, fluffy and fruity. Instead, it's another of brewers Simon and Kate's forays into the world of malt, something they've done so well in the past with… Read more
Rich Brown