As soon as they had all the green lights lined up for their new brewery, the Cavalier guys didn't waste much time getting around to having a little fun. There was the Black Coffee IPA brewed with Melbourne roasters Proud Mary to represent Melbourne at Good Beer Week 2013 and the return of their Imperial Stout, a beer that, like their Imperial IPA, hasn't featured very often but has tended to leave the beer geeks gagging for more. It's easy to understand why, as within its dense 10 per cent body is… Read more
Black

Hot on the heels of becoming the only Aussie brewery to win a gold medal for an IPA at this year's Australian International Beer Awards (and picking up a swag of other medals too), The Monk has launched a cross breed of a beer. The Dark Hefe came about during the process of creating the collab beer The Monk brewed with Eagle Bay for this year's GABS. Head brewer Paul Wyman wanted to see how using dark roasted malts with the Hefeweizen yeast would combine and the result was a beer he says "pours… Read more
Dark Brown

The fruits of Red Hill's annual hop-picking day is a beer based on the traditional ESB - or Extra Special Bitter - style from the UK. Thus, while it is the showcase for the freshly picked hops from their own hop farm, lovingly and sweatily plucked by the owners and their friends one March weekend, it's also a pretty malt-driven beer. Cloudy copper brown to look at, the aroma is as much toffee and nuts as it is hoppy, with the fresh Willamette and Goldings hops coming to bear more in the mouth. There… Read more
Rich Brown

As a home brewer of many years and, more recently, one of the publicans involved in the Yarra Hotel in Abbotsford, Mick Thomas of Weddings, Parties, Anything was the perfect fit for this year's Good Beer Week Rockstar Brews. And, when hooking up with Goat, he had plenty of ideas about the beer he was after. A fan of darker brews, he opted for an English style Brown Ale, with the result being the Eastern Brown. For the most part, it's a sensible beer, at least when compared to the Wagons' PB&J:… Read more
Rich Brown

The team at Holgate Brewhouse releases plenty of beers year round that require careful nurturing and nudge at the boundaries of what beer can be. But there's nothing in their roster quite like the Beelzebub's Jewels. First released in 2010, when it was based on their Double Trouble - given a boost inside some Curly Flats pinot noir barrels - it's since been enhanced, starting from a brand new recipe in 2011, with refinements and lengthier periods in barrels ever since. The changes were obviously… Read more
Rich Brown

In the year or so since he was in Australia to judge at the 2012 Australian International Beer Awards and brew with a number of local brewers, we've come to understand well the modus operandi of Danish gypsy brewer Anders Kissmeyer when it comes to collaborations. He rocks up, turns on his laptop and smokes rollies and pipes all day and a few weeks or months later a beer appears. Thankfully, it would appear the Master Brewer has such skills that even by his mere presence in a brewery some pretty… Read more
Rich Brown

Last year, a travelling Tasmanian beer blogger who had written a piece for The Crafty Pint before setting off around the world called in to Bodebrown, a small craft brewery in southern Brazil. They'd recently won the Best New Exhibitor title at the 2012 Australian International Beer Awards and made Adam feel at home, so much so he suggested we get in touch with them about this year's Good Beer Week. We did, they came, they had fun, so did everyone that met them, and they've left behind a beer brewed… Read more
Golden

When Red Duck's Ugly Duckling first appeared, people scratched their heads: "A braggot? What's that?" It was Australia's first commercially released braggot, a beer style with origins in Medieval Britain that is a blend of a mead and a strong ale. The Ugly Duckling was a very high ABV and unusual beer, but one that has ended up heralding a series of braggots from the Ballarat brewer, from those featuring buckwheat to highly honeyed versions. The Grizzly is, by our reckoning, the fourth… Read more
Golden

During Newcastle Craft Beer Week, The Crafty Pint was sharing a late night whisky with Young Henrys founder Richard Adamson when the idea was hatched for him to bring his rockstar brewing collaboration concept to Melbourne for Good Beer Week 2013. Thus it was that six months later My Dynamite, Front End Loader and Hell City Glamours (featuring Young Henrys brewer Oscar) took to the stage at the city's iconic Cherry Bar to launch three beers they'd created with the Newtown brewery. While the bands… Read more
Black 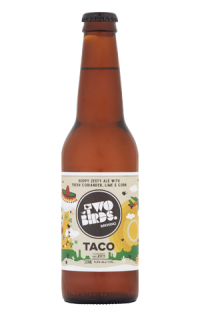 We clearly remember our first meeting with Two Birds Taco. The Crafty team had just walked into the Royal Exhibition Building for the opening session of the 2013 Great Australasian Beer SpecTAPular and chosen the ten beers we'd put on our first pair of paddles. Nick O returned and declared: "I've changed one of them and gone for Two Birds Taco instead." Given it was a beer that seemed to have been brewed as much for the comedy value inherent in the title as anything else – and contained… Read more
Golden Yellow

The Yeastie Boys and Tasmania's Seven Sheds may have released 100 per cent peated malt beers but this may take the prize for the beer with the most diverse range of smoked elements in the history of beer. A join project between 3 Ravens, Mash Brewing (who rescued 3 Ravens when it looked like they could be lost last year) and Boneyard Brewing (the spin-off from Josie Bones that brews at 3 Ravens) it's got smoked malts, smoked hops and smoked tea (thanks to a dry tea-bagging process). Inspired by Mash… Read more
Dark Brown

For a bunch of brewers on the cutting edge of the modern Australian brewing scene, the guys at Stone & Wood don't mind taking inspiration from Marsellus Wallace once in a while. Well, once in a year, to be precise. As that's when they invite friends and family to their Byron Bay and "get Medieval on your arse". Well, not your arse so much as a bunch of volcanic rocks that co-founder and head brewer Brad Rogers has been lugging around since his days brewing in Fiji. They're heated in… Read more
Dark Brown

Check out Stone & Wood's Beer Finder for your nearest stockist.

As well as the standard 500ml bottles, Stone & Wood are also selling 'vintage packs' which consist of a 500ml swing-top, ceramic bottle and a sta

Ben's first beer under the Bridge Road banner remains an accessible starting point to his range. A balance of sweet malt and hop flavours give way to a slightly fruity finish for an eminently sessionable beer.… Read more
Golden Yellow

Despite the fact that well under 1,000 bottles of this have been released each year since it first appeared to mark Nail's tenth anniversary of brewing in 2011, it's probably the beer that has brought most attention onto the brewery in recent years. It's an imperial stout that's got progressively bigger each year and one that retails at $70 a pop for a 750ml. Such a price point means the beer is open to serious scrutiny and it's scrutiny to which the beer has held up magnificently, collecting trophies… Read more
Black