Another new beer that's playing loose and fancy free with styles is the latest from Mash. With a tale that sounds not too dissimilar to that of The Mash Collective's Aureus Chrysalis, the Dubbel Brown mixes a Belgian ale yeast (the Dubbel part of its name) with and English style brown ale malt bill. However, further twisting its DNA, the brewers have used US hops too. According to head brewer Charlie Hodgson: "We have fermented it on the cool side to keep the yeast on the down low but to still… Read more
Rich Brown

There's a very strict rule in place for any brewer taking part in this year's GABS - your beer must not be released anywhere before GABS is over (so we'll keep schtum about the US entry we sampled at the Craft Brewers Conference in March - was bloody delish though!!!). However, that doesn't mean you can't have offshoots of your GABS beer, which is what the team at Bright has done, creating a "parti gyle" brew with the left over grain from their epic entry. "Parti gyle" beers use… Read more
Golden

When The Crafty Pint was over in the US in March, there was plenty of hype around Stone Brewing's Enjoy By Double IPA, a new release from the Californians that is sent out as fresh as possible with the date before which it must be drunk emblazoned across it. The result is an impeccably fresh hop bomb of a beer in which the hop characteristics don't have time to taper off. The day before returning, we had another IPA - Maine's Lunch - recommended to us that, again, comes with a tight best before date… Read more
Golden 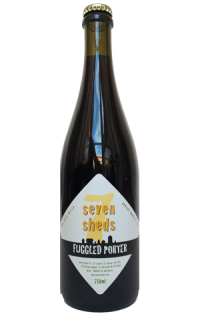 What was intended to be a double batch of Stark Raven became the first batch of Fuggled Porter when Willie discovered while mashing in that he couldn’t fit that much grain into the mash tun. In a beautiful coincidence, Seven Sheds had just completed its annual hop harvest so a new black beer was created quite literally “on the hop” and has been a part of the hop harvest lineup ever since. The first batch was sent off to traverse the Bass Strait over and over on the Spirit of Tasmania to recreate… Read more
Black

As hybrids go, the fusing of Star Wars' Lando Calrissian with one of modern TV's most potent symbols of an impending apocalypse is pretty unusual; adding what appears to be a Wookiee's hand and a rubber glove to the label of the beer bearing said name adds further confusion. Yet the style for Moon Dog's latest isn't as outlandoish as many from their past. That said, the fact that a massively hopped, high alcohol Belgian Tripel isn't completely novel probably says more about life on the boundaries… Read more
Golden

They've been hop happy at Freo's Monk in recent months, with many of their small batch releases high on lupulin love. Not that this is a bad thing, with versions of their Chief IPA and the Three Fires Imperial IPA doing rather well for themselves at the most recent Perth Royal Beer Show. But with Autumn upon us, it's been time for Monk brewer Paul Wyman to take a turn to the dark (and malty) side to create a Dunkel. Based on the Bavarian Dunkelweizen style, the beer, says Paul, "has a delicious… Read more
Dark Brown

The team at Margaret River's Eagle Bay have decided to welcome Autumn with open arms in the form of a traditional Czech style Pilsner. Using fresh rainwater captured on their own farm and their own homegrown hops to create a "fresh and crisp" sessionable lager, their latest has gone on tap at the brewery with a small amount making its way to Perth's Five Bar. The brewers tell us: "It's bright gold in colour with floral aromatics from the handpicked, fresh, green hops from our small… Read more
Pale Yellow

The Crafty Pint belatedly made it out to Red Duck's current haunt in Ballarat recently (they moved from their original home in Purrumbete late in 2011). There, dotted around the warehouse alongside the tanks named after the world's leading footballers and pallets of beer were all manner of barrels and experiments. Within just a few minutes it was becoming tricky to keep up with Scott Wilson-Browne's increasingly obscure journeys into beer, with the latest theme (if there is such a thing) being to… Read more
Golden Yellow

Now this is a weird one. And not just because it's a beer from Moon Dog. No, because when we first sampled Mr Mistoffelees at last year's Great Australian Beer SpecTAPular, we found it to have an unpleasant characteristic that rendered it, to the Crafty palate at least, undrinkable. That it went on to be voted one of the most popular beers at the event was a surprise, one we put down to the fact that some beer nerds just want to love anything different or that we had yet to unlock some part of the… Read more
Golden Yellow

"At The Wheaty we love Hops. So we decided to brew a Sour." An early entry for the best raison d'etre for a beer in 2013. But would you expect anything less from the ladies at Adelaide's premiere beer, whisky and good times joint? This is the latest release in the Bridge Road Bar Series, for which the Beechworth brewery brings bar staff from the nation's leading beer venues to their home to create a beer. According to the Wheaty team, this is a beer, "to all intents and purposes, that's… Read more
Pale Yellow

The team from Moo has been leaping the fence at nearby Bushy Park once again* to pilfer a load of fresh hops for its annual Harvest Ale release. This time around they bundled a swag of Summer and Willamette hops back to the brewery near Hobart where they were used to create a robust brown ale. As they explain: "In using fresh, wet hops, the aroma is slightly resinous, with tangerine and tropical fruit elements. Due to the seasonal variations, the hop flavour and bitterness is always different."… Read more
Rich Brown

Holgate / Ní¸gne í? Half A World Away

Anyone else suspect the team at Ní¸gne í? is after Aussie citizenship? Perhaps they've grown tired of the endless winters and fancy a life in the sun. Either way, they seem to be gifting us an endless supply of collaborative beers, which to date already includes the India Saison, Aurora Borealis, Our Dark Secret and now this, with a collab with Moon Dog and another with Bridge Road already in tank (and barrel and fish bowl or whatever else they can find to use). This is the beer that came about… Read more
Rich Brown

It's time to get fruity and funky with Bright Brewery as they bring their raspberry sour out of retirement, with the 2013 version having enjoyed a rather lengthy gestation period. The base beer has spent a year in tank with 100kg of locally sourced raspberries, during which time it's been fed with all manner of funky yeast strains: Lactobacillus, Pediococcus, Brettanomyces bruxellensis, Brettanomyces lambicus and two Saccharomyces strains for good measure. According to Bright's head brewer Jon Seltin:… Read more
Rich Brown

Inspiration for a new 4 Pines beer can apparently come from many different sources. It can, like their stout - the 'Certified Space Beer' - spend years in continual development and involve aeronautical engineers and zero-gravity flights. Others, like this one, have a rather more straightforward genesis. The story goes that 4 Pines brewers Andrew Tweddell and Chris Willcock were chatting with the bar supervisor, Chris Moore, when the conversation turned along the lines of: Chris W: We need to brew… Read more
Rich Brown