Does anything need to be said about this beer? The most eagerly anticipated of the Mornington Peninsula brewery's seasonal range and now brewed in larger amounts to try and meet demand (they never will!) is a beer that has been warming the cockles and exciting the taste buds of Aussie craft beer lovers for years and never lets you down. It's probably one of the most cellared beers in Oz too. If we can say anything about this year's, it's that we had some on tap at the Terminus and figured it would… Read more
Black Seven Sheds' full name includes the words "hop garden" and, should you visit, you'll find just that next to the cellar door. Willie his brewers use the hops grown there in a number of beers throughout the year, including one variety you won't find used commercially elsewhere: Leggett. It was one of the three trial varieties that went into the first ever Cascade First Harvest but never graduated to Hop Products Australia's commercial crop. These days, most of the annual hop harvest at Seven… Read more
Golden Yellow

It was time spent in the UK drinking real ales in British pubs that, at least in part, inspired the decision of Red Hill owners Karen and Dave Golding to embark on their brewing journey. So perhaps it's only right that upon returning from their latest jaunt around the UK that they should return with a new British beer. And how much more British can you get than a beer dedicated to old Queenie's 60 years in the top job? From the first whiff, it's a beer to transport you back to a cosy British pub… Read more
Rich Brown

Back before brewer Hendo (now at Southern Bay) made his brief dalliance with Prickly Moses and set about knocking out some big US-inspired brews, the seasonals coming out from the Otway Ranges tended to be more traditional in origin, notably the trilogy of Saison, Farmhouse Ale and Reserve De Otway. Those three are coming back soon, apparently, but in the meantime there's this - a rusty coloured, spiced strong ale that's spent 12 months in pinot noir barrels, something that's apparent straight up… Read more
Rich Brown

This beer produced originally for the 2012 Great Australian Beer Spectapular and the Good Beer Week Great Beer Swap keeps to the Red Hill traditions of seeking inspiration from the classical styles of Europe. The Sticke Alt was a special version of the altbiers of Germany - one that you might have to ask the brewer or publican for with a nod and a wink. According to the Red Hill folks theirs is a "stronger, darker and hoppier variation of the traditional Dusseldorf Altbier. A cool ferment and… Read more
Rich Brown

This year's Danish invasion of Melbourne has left quite a legacy. Well, it would have if people didn't keep drinking it so fast, with the Mikkeller efforts with Goat and Bridge Road all but gone already. Next cab off the collab ranks is this from kindred jokers Moon Dog and Beer Here. Described as a Danish farmhouse ale of sorts, it's brewed with flaked oats, maris otter, biscuit, dark wheat rye and peated munich malts and a farmhouse yeast, the penultimate of these explaining why the initial aroma… Read more
Rich Brown

What better way to mark 20 years holding the Australian International Beer Awards than to invite two of the most successful Australian breweries of recent times to make a beer together? For its landmark year, the RASV invited WA's Feral and Victoria's 2 Brothers to brew a beer using all Australian ingredients. The former was subsequently named Champion Large Australian Brewery at the 2012 awards, while 2 Brothers continued its run of form with a shortlisting for Champion Small Australian Brewery.… Read more
Dark Brown

The final part of the Magnificent Mullet series (unless they go and get all Hitchhiker's Guide on our asses) sees everyone's favourite ponytail-sporting, line-dancing, annoying sprog-spawning, Bill Hicks-inspiring hick have his face replaced with a citrus fruit and the Moon Doggers chuck a heap of citrus peel into their witbier-y, berliner weisse-y concoction. Of the three, it's the one in which the fruit addition is most prominent, with a pretty intense lime like character offering up plenty of… Read more
Pale Yellow

One of a handful of beers that was debuted at the 2012 Great Australasian Beer SpecTAPular that looks like becoming a semi-regular release from its brewery is the second Imperial beer from Mornington Peninsula. The Imperial Amber sees pretty much every element of the beer ramped up to 11, with brewer AG describing it as "burnished copper in appearance, its aromas of caramel and fig jam are melded with subtle citrus hop character. The lashings of American hops used in this beer are balanced with… Read more
Pale Yellow 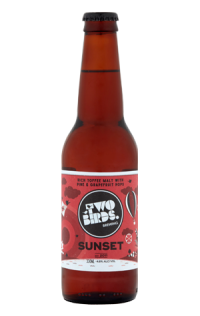 An instant favourite at Crafty Towers as soon as it arrived on the scene as the second Two Birds release was this red ale going by the name Sunset. Drinkers are first met by a rather enticing combo of tropical and citrus aromas, backed up with a touch of toffee that hints at the rich malt flavours to follow. Full-flavoured and pretty full-bodied too for a beer of its alcohol content, it's a well balanced take on the style that's a versatile food beer and also a drop we've used to entice newcomers… Read more
Red

We've written plenty about this beer already, given its unique conception through the competition we ran earlier in the year via The People's Pint website. Invented by Brisvegan Leo Hede, chosen by a public vote, turned into a beer by Ron Feruglio at Temple, launched during Good Beer Week at a night on which Steve Grossman announced their partnership in the Temple Good Beer Week Scholarship and now available at a selection of the country's top craft beer bars, it's the first of what we hope will… Read more
Rich Brown

When the head brewer from the world's oldest existing brewery decides to pop into your brewery when it's only been open for a few weeks to make only the second collaboration in his brewery's history, you have every right to give the beer a name entirely in capital letters. And a name as bold as UNIFIKATOR. Because however you look at it, the fact that Temple hooked up with Frank Peifer of Weihenstephan is an incredible achievement. The beer - a strong wheat beer or weizenbock - uses the distinctive… Read more
Rich Brown

And more to follow at a series of launches soon

Part of the brewery's ongoing Magnificent Mullet series (and their obsession with tart, sour or wild ales) gets off to a flier before you've even opened it. In the centre of the label, surrounded by said mullet and where McGuyver's head would be is an open guava that makes it look like the enduringly popular TV star has had his face cloven in two with an axe. Such prettiness continues in the glass with the beer pouring as a cloudy light yellow with the purdiest of foamy white heads. That they've… Read more
Pale Yellow

We have to be careful when writing about IPAs from Hargreaves Hill. We mistook a joke about the name of the Topaz and Amarillo IPA from 2011 as serious which resulted in parts of the beer world thinking it was indeed called Melanie. So just to be certain, this one is called the C4, not 4C IPA. So called because it contains four hop varieties that begin with the letter C - Citra, Columbus, Centennial and Chinook - and also in a nod to the IRA's explosive of preference in its 20th century campaign… Read more
Rich Brown

Danish brewing genius Mikkel Borg Bjergsí¸ was in Australia last month and, while here, starred at The Gypsy & The Goat event that we ran at Mountain Goat's brewery. It featured a rather special brewery floor degustation while a collaborative brew was created by Mikkel, Dave Bonighton and the Goat brewing team. The result is this, the Black Pepperberry IPA, a lusciously rich beast with a seriously powerful hop aroma and plenty of hop flavour (thanks to "aggressive" dry hopping with… Read more
Black

And other good beer bars and bottleshops TBC

When we cracked our sample of Dark Harvest, the reaction was instant. "Chocolate orange!" we cried. Then we thought that might be a stupid thing to think. But we told Ben at Bridge Road anyway, opening ourselves up to the risk of being unmasked as utter charlatans. Thankfully word came back that "the hops were a research variety that showed huge orange and mandarin characters in the paddock. Good that you got some choc orange, that was the plan." Phew! Dodged that bullet. So,… Read more
Black

and other venues TBC 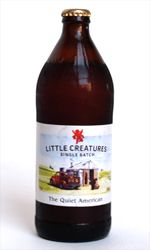 It's all go at Creatures these days. Hot on the heels of the Wet Hopped Pale Ale comes this hybrid US IPA / Belgian Trappist ale, while the Little Rabbit collaboration brew with their sister brewery at White Rabbit takes shape in Healesville. It's "Quiet" as a nod to the monks who brew the original Trappist beers and "American", well, because it's packed with pungent American Cascade and Chinook hops. This blending of styles is rather popular these days it seems, with Bridge Road's… Read more
Golden

The first fruit of the sticky day in March when the Red Hill crew invites friends and beer lovers to the farm to pluck their homegrown hops from their bines. Just 24 hours after picking, lashings of Goldings and Willamette were thrown into the beer, with some dry-hopped and placed in casks to be served at the brewery via its handpump. The rest is out and about in bottles and kegs now. Unlike some of the hop harvest beers that come out at this time of year that try to allow just the hops the shine,… Read more
Rich Brown

Anyone that's enjoyed the previous edition of Van Dieman's take on harvest ales - using harvested rose hips, hawthorn and sloe berries from around the family farm rather than freshly harvest hops - will be in for something of a surprise this time around. Whereas in the past, there was the addition of a subtle forest fruits like character to a soft, malt-led English style ale, in 2012 it's all about the funk. Instead of racking the beer over the farm pickings for six weeks, brewer Will racked them… Read more
Rich Brown

Some will be coming to Melbourne for Good Beer W

When flicking through the results booklet after last year's Australian International Beer Awards, a name jumped out from the crowd, the WHOA! from Grand Ridge. It had medalled but we'd never heard of it. Now the mystery is solved as it's been bottled and released around this year's hop harvest. The WHOA! stands for wet hopped oatmeal ale, meaning it's brewed with fresh hops from the brewery's own collection and uses a little oatmeal in the grain mix. The result on the hop front is rather subtle -… Read more
Golden Yellow