In our most recent back and forth with Scott Wilson-Browne, head brewer at Red Duck, he revealed that he has more than 60 beers available for tasting at his forthcoming All In events as part of this year's Good Beer Week. Sixty-plus of his own beers, that isâ?¦ Little wonder, then, that this month there is not one, not even two, but three limited release beers coming out in bottle at the same time. Among them is Groak, a Barrel Aged Golden Gruit Ale, with gruit beers being those that traditionally… Read more
Dark Brown

The team at Manly's 4 Pines is back with another seasonal release in 500ml bottles. And, as with those that have come before, they continue to eschew the path trodden by many local brewers when it comes to seasonal releases ' in other words, go nuts ' in favour of releasing rather more approachable affairs. Following in the footsteps of the likes of their Oktoberfest lager and the recent Calypso comes the Amber Mosaic. It is a beer that has seen the light of day on tap before and is now enjoying… Read more
Rich Brown

The new and experimental hop lovers at Bridge Road Brewers have managed to snag a swag of the latest variety to be put into commercial production by Hop Products Australia. Enigma has been rushed through the development process, which can usually take a decade or more, faster than any other hop variety in HPA's existence. You may recall reading about it a few months ago on this site when HPA's hop breeder Simon Whittock let slip about Enigma in an interview at a time when it was still supposed to… Read more
Pale Yellow

With former Hargreaves Hill head brewer (and regular Crafty Pint blind tasting panellist) Glenn Harrison having upped sticks after six years to join Temple, the Yarra Valley brewery has brought in a replacement from just a few kilometres away. Kai Damberg joined Hargreaves recently from White Rabbit and was given free rein to design their 2014 fresh hop beer. The brewery secured some fresh Ella hop cones ' shipped directly from Tassie by Hop Products Australia on the day of harvest ' and decided… Read more
Golden Yellow

The second of Bridge Road's annual wet hop releases is back. First brewed with Mikkeller in 2012, it's called Dark Harvest for two reasons. The beer was originally brewed at night, partly due to the Danish gypsy brewer's schedule while in Australia (including this and this for newcomers to The Crafty Pint), and is also deep brown - almost black - in colour. The original beer used an experimental hop variety from Hop Products Australia that gave the beer an incredibly distinctive choc orange aroma… Read more
Dark Brown

Traditionally, for the most part at least, when breweries have turned their attention to creating fresh hop harvest ales they have tended to favour pretty straightforward base beers that allow the hops to shine. Last year, Moo Brew took a rather different approach and released a fresh hop Robust Porter. It was one of the best beers we sampled in the whole of 2013. And now, for its 2014 harvest release, they are trying something a little different again. It is the first harvest release with new head… Read more
Pale Yellow

Having any beer brewed to mark your arrival in the world is a pretty special thing. But having a beer as good as Marnie's Majority Ale brewed for the occasion is pretty damn special (apart from the fact you technically have to wait 18 years to drink it). First created in 2013 as a celebration of Grifter's head brewer's transition to fatherhood, this beer found its way into the Hop Bomb section of our list of 50 top Australian beers in the 2013 end-of-year James Halliday's Wine Companion Magazine.… Read more
Rich Brown 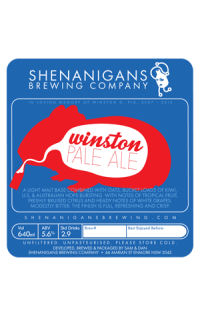 If the ultimate measure of a beer is whether you like to brew it and love to drink it, Winston is something of the Shenanigans brewers’ perfect beer. As is the case with everything they create, it doesn’t fit neatly within any style guidelines although, if you had to choose, it probably sits most comfortably in American Pale Ale territory. That’s largely based on the hops - Australian, New Zealand and USA varieties - which fair explode out of the glass with aromas of tropical fruit. Those balance… Read more
Golden

Now this should prove interesting in beer geek land. It almost feels like rolling a hand grenade into the midst of a group of beer aficionados and waiting for them to spot it and cry out in horror. Why? Well, the latest beer to appear in cans from the Australian Brewery is its Mexican Lager, "inspired by the hot plains of Mexico", decorated with psychedelic skulls, and essentially the lager designed with the brewery's home crowd in NW Sydney in mind - those who might shirk from the brewery's… Read more
Pale Yellow

For International Women's Collaboration Brew Day 2014, female brewers and beer industry types around the world were called upon to join together in their respective countries to brew a beer and help raise awareness of women in the beer industry. The said beer was to be brewed on the same day, to the same recipe - a four per cent pale ale using Cascade hops - and released under the same name: Unite. Australia's participants in this celebration were the Women of Beer collective who assembled for their… Read more
Rich Brown

Fresh kegs of the latest batch of Feral's Barrique O'Karma have been hitting taps around Australia for a couple of weeks now. However, with one of the brewery's staff telling us the bottled version ' the latest beer in their occasional Brewpub Series ' is the best beer they had ever put into a bottle, we thought we should wait until we could get our hands on a stubby. Well, now we have, and... First, a recap of the beer. Initially brewed for last year's Great Australian Beer SpecTAPular, Barrique… Read more
Black

The annual Bridge Road Harvest Ale release has become an event of note for both beer lovers looking for a hoppy new drop and the hop growers at Hop Products Australia, who learn much about how some of their experimental hop varieties will perform. Each year, head brewer Ben Kraus selects a different, as-yet-unnamed hop variety from the Rostrevor Farm just down the road from his Beechworth brewery, picks the entire crop and throws it into a beer as it is, still fresh and wet from the bines. This year,… Read more
Golden Yellow

Although maybe not attracting as much attention as many of their peers, the brewing team at Mash has been steadily knocking out some intriguing seasonals in recent years. From the Rye The Hop Not ESB to the smoky DeVille to the unique Grasscutter, a lawnmower/session beer gently fermented on two toasts of French oak, their beers are always worth keeping an eye out for. Now they're back with not one but two limited release beers: a Scotch Ale and a West Coast IPA, and both, according to head brewer… Read more
Rich Brown

Since rolling up the doors for the first time in early 2012, the team at Newtown's Young Henrys brewery have managed to effortlessly ingratiate themselves into their local community to the point where it's actually a little difficult to remember what life was like without them. Now, as the brewery approaches two years of beer-fuelled rock & roll fun, they can take a brief moment to take stock of a journey that's seen them grow in every regard; doubling their brewing capacity three times already… Read more
Rich Brown

Following the runaway success of their first can, Summer Ale, Mountain Goat is back for more. This time around, it's not a new beer but the return of an annual release that's been doing the rounds for a few years now. Fancy Pants is the amber ale that they've always said is the beer Hightail would be were there no need to balance the books. What that means is a richer burnt toffee malt body and a cranking up of the Galaxy hops to create a dark copper-coloured beer in which fruitiness ' and a touch… Read more
Rich Brown

Nationwide throughout the cooler months

The cans keep on coming, with Mornington Peninsula Brewery following in the footsteps of the Australian Brewery and Mountain Goat by popping craft beer into cans. They've installed their own canning line and first to make an appearance, in rather fetching black and gold livery, is their Pale Ale. Already an appealingly aromatic, balanced and flavoursome beer, it has received its first tweak in the three and a half years since it was the brewery's launch beer. The tweak takes the form of dry hopping… Read more
Golden