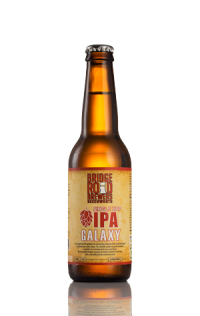 NOW RELEASED IN BOTTLES! Named after the Australian hop variety that has done much to influence beer styles in Australia in recent years, the Galaxy IPA was first brewed by this Beechworth brewer last year. Using nothing but the Galaxy hop both for bittering and aromatics / flavour, the 2010 variant was unveiled for the first time on the first day of October's Microbreweries Showcase. This year there's a higher amount of dry hopping - 12kg in 800l - resulting in a lighter, less bitter beer that's… Read more
Pale Yellow

An exclusive release for members of Bridge Road's Posse, this is a pale Belgian ale developed as an easy drinking summer beer with a difference. It uses a basic malt recipe of Australian pale malts and two different Belgian yeast strains. According to Ben Kraus, the result is "a mild beer with minimal bitterness and a fruity finish from the yeast strains. The plan was to assess the beer after primary ferment and then decide on a hop regime for dry hopping. We have so far added Centennial and… Read more
Pale Yellow

A rewarding quaffer, this is the Goat's take on an English summer ale that borrows its name from the single hop used in its production, the Styrian Golding variety. It could almost take its name from the colour too - at least if Goldilocks was at the ranga end of the blonde spectrum... Designed to be the kind of beer you'd session in British pub gardens, it has a gentle "herby, spicy" nose (according to the brewer - Crafty's hayfever put paid to any sniff test). The carbonation gives it… Read more
Golden

Released at the brewery 17/11. Kegs to appear elsewhere later...

While the weather gods are doing their level best to convince the people of the Mornington Peninsula otherwise, summertime is supposed to be on its way and so the Red Hill brewers are sticking to their guns to bring us their summer seasonal, the Bohemian Pilsner. Richer and creamier in the mouth than most pilsners, it promises to be yet another in a long line of winners from Red Hill. Lemony citrus notes and a light honey sweetness give way to a little spiciness on the nose in a beer that pours a… Read more
Golden Yellow

On a trip to the UK last Christmas, Crafty noticed some of the brewers behind the UK's more popular real ale brands, such as Abbot and Old Speckled Hen had started releasing souped up "vintage" versions. And very nice they were too. It's a similar approach that 3 Ravens has taken here with the second release of their Uber Special Bitter - a bigger, stronger version of their English Ale. Thicker in mouthfeel, darker in colour (an enticing dark rusty hue) and higher in alcohol, it's not crazily… Read more
Rich Brown

The second special to appear from the tanks at the fledgling Mornington Peninsula Brewery is a hefeweizen, which is being tapped for the very first time at pretty much the exact second this description appears on Crafty. Which means we haven't tasted it yet. However, brewer AG says it's got all elements you could wish for in a hefe: banana, cloves - even a hint of cinnamon. He says it's got a tart finish, making it very refreshing. However, he also claims it's based on an old family recipe passed… Read more
Pale Yellow

A new brew created for this weekend's second Australian National Homebrewing Conference, sneak peeks of this Rye IPA (India Pale Ale) will be on offer at tonight's Goat tasting (Oct 28) at the Terminus Hotel in Clifton Hill / North Fitzroy. The beer uses the same recipe as the brewery's normal IPA but with 20% rye malt added. According to head brewer Jayne Lewis, the result is an added "smoothness and roundness to the palate while all the usual IPA goodness remains. We also used wheat and crystal… Read more
Rich Brown

More bars may get the beer - watch this space!

Another of Holgate's beers to have undergone something of a tweak for 2010 (see the Mount Macedon and Hopinator for other examples), the new Double Trouble is causing trouble at the brewery - the brewers can't stop drinking it... A Belgian Abbey style Dubbel, it's all about richness of flavour: intense dark fruit, toffee and dark rum characteristics that make it a good match for sweet desserts or cheese platters. Paul Holgate says to look out for the October 2010 date on bottles if you're after this… Read more
Rich Brown

When Crafty first visited the brewery, Mornington Peninsula's brewer AG - ever the optimistic Saints fan - said their first specialty release would be a porter called the Premiership Porter. Things didn't quite pan out for St Kilda but, he says, "thankfully it's not taken on any sour characteristics (unlike the brewer)". Instead, he says it possesses a "rich, smooth mouthfeel" that's "long in the palate" and has chocolate and coffee notes "from areshole to breakfast".… Read more
Dark Brown

We've all been there. Got a hunger, open the cupboards and fridge and there's next to bugger all there. Although, with a bit of creativity, a large pot and some careful seasoning, something comes from nothing. And so it was - sort of - at the Goat recently. The brewers found they had heaps of odds and sods lying around so did a stock check, sat down and did some complicated algebra (maybe) and came up with a new, once only brew called Bubble and Squeak after the classic leftovers dish. Containing… Read more
Golden

It wasn't too long ago that the Mountain Goat brewery seemed to be a lager-free zone, with even it's lightest beer - the Steam Ale - being made with an ale yeast. Then along came Richard III, the full-blooded malty Doppelbock and now this, the brewery's first Imperial Pilsner. OK, so neither is a bog standard lager by any means, with this registering a sizable 7.5% alcohol and packing a solid punch of bitterness too. According to head brewer Jayne Lewis, it's "brewed with Pilsner and Light Munich… Read more
Golden

Getting fruity in time for summer, Otway Estate appears to have combined its beer and cordial-making skills in this organic raspberry beer. A heap of crushed raspberries were added to a base beer with a soft enough flavour profile to allow the fruit to take effect, although it's in the aroma that they really shine through: it's like taking a whiff of a fresh punnet. The raspberries' effect on the palate is more subtle, definitely there but not in the manner of a Lindemans Framboise, for example,… Read more
Golden Yellow

Or at the Young & Jackson's Otway Showcase

Another extremely limited release, most of this has been committed to beer clubs and homebrewers. However, a small amount is available from the Red Duck Provedore in Camperdown and some Melbourne bottleshops. Crafty's not had the chance to sample with the Microbreweries Showcase getting in the way, so over to Slowbeer's Chris Menichelli for some guest tasting notes: 'Golden pour, darker than you come to expect from the style. Nose has a honeyed malt sweetness from the pilsner malt & a touch of… Read more
Golden

The Otway Estate team really push the boat out for their annual Oktoberfest, bring in German oompah bands, putting on traditional German fare and games, having souvenir steins produced and, of course, brewing a specialty Oktoberfestbier. Brewed in the traditional Vienna lager style with ingredients imported from Bavaria, the 2010 version pours a bright copper colour with a white foamy head, has a soft malt aroma with a hint of spice from the hops, a biscuity malt-dominated flavour and a long, dry… Read more
Golden Yellow

The latest in the 3 Ravens' 'Uber" series, in which the Thornbury brewers pick a style from their usual range and do something a bit special with it, the Rye is loosely based on their White (or witbier). It's a Roggenbier, a style originally heralding from Bavaria, in which the yeast strain used in wheat beers is combined with a hefty whack of rye malt - a type of malt rarely used in beers today, although becoming increasingly popular in the US craft scene and among Aussie homebrewers. The result… Read more
Golden

First brewed to celebrate the Goat's 10th birthday, the Double Hightail returned in draft form in August as the brewery prepared to become a teenager. If the Fancy Pants is what the Hightail would be if there were no financial constraints, this is what it becomes when there are no constraints full stop. Another batch has just been produced to become the brewery's third Rare Breed longneck release. And if you know the Hightail, you'll agree this is indeed a Double Hightail. The Galaxy hop and caramel… Read more
Rich Brown

We're beginning to suspect there's something in the Woodend water at the minute. Holgate's original Mount Macedon Ale has discovered a punchier new hop character, the Hopinator's reacted in kind and their seasonals are flying out the door like there's no tomorrow. With this year's final batch of Brick Kiln Dark Wheat Beer still conditioning, it's time for Spring and the arrival of the Road Trip IPA. Inspired by Paul Holgate and family's holiday in Pacific Northwest USA last year, it's a hop lover's… Read more
Golden

The Moorabbin bros have got the funk. Having gone all voodoo on us with their last limited release, this time they're getting up like a sex machine with James Brown, a rather large Belgian strong ale tipping the scales at 8.8%. Crafty's not had the chance to have a tipple yet, but 1 Brother tells us it's "brewed with 50% extra funk. Estery nose, with chocolate and peach up front, followed by rum, raisin and vanilla back palate. Over a thousand bucks of Belgian candi sugar went into the mix."… Read more
Rich Brown

The beer chosen to launch Mountain Goat's Rare Breed limited release longneck range is back. First time out it was a big yet beautifully balanced blend of powerful, aromatic hops and rich malts backed up by a firm bitterness. There are no bottles this time around (at least not yet) but it'll be hitting a handful of taps around Melbourne this week. No bad thing as, while it was a tasty drop out of the longnecks last time around, when Crafty sampled it in draught form at the brewery it was quite possibly… Read more
Golden

Anyone who's met Paul Holgate and his team of brewers will know they're a swarthy lot: real men with testosterone literally teeming from their pores. However, they are known to like a ladyboy or two. "What?" you say. Well, for the past year or so, they've been offering them over the bar at their Woodend brewhouse, the Ladyboy being a Black & Tan style mix of their cocoa and vanilla bean Temptress (the lady) and roast macadamia-laden Nut Brown Ale (the boy). For a limited time only,… Read more
Dark Brown