Yet more proof that there are no rules when it comes to brewing these days. Whether it's Murray's throwing a tonne of hops at an Imperial Stout, Feral combining Belgian yeast with Japanese-developed hops or people turning India Pale Ales anything but pale, it's very much a case of anything goes. Here a Belgian yeast joins the malts of a porter in a beer that's finished off with some organic vanilla extract. The result is a beer that will be familiar to fans of Red Duck, with plenty of chocolate,… Read more
Dark Brown

Time for some honesty. Faced with a wobbly table at Crafty Towers, chances are we'd fold up a bit of card, shove it under one of the legs and be done with it. We're willing to wager such a solution simply wouldn't do for Scott at Red Duck. After all, any man who refuses to make one of his beers for a couple of years because he can't get hold of exactly the right type and shade of wild bush honey with which he made the previous batch doesn't seem like the "No one'll notice" type. Thankfully,… Read more
Rich Brown

If ever the world of beers designed to be sipped and savoured was looking for a poster boy, it could do far worse than give The Ox a call. Whenever a bottle is cracked at Crafty Towers, it's the only one that needs opening that night; the sort of beer you can happily return to over a couple of hours. It seems only appropriate to enjoy it this way given that, on the rare occasions the Red Duck guys make it, they spend 22 hours in the brewery. Ox by name, Ox by nature, it's a thick, dark brown beast… Read more
Black

This is the return of a beer that first made an appearance in 2010. It's 3 Ravens' take on the pretty rare Roggenbier style of wheat beer from Bavaria that combines a wheat beer yeast with rye malt. Last year's was one of the more intriguing specials to roll out of the Thornbury brewery, blending many of the characteristics you'd expect from a wheat beer accompanied by a distinct, almost peppery spiciness. This year's is one that seems to have got the brewers feeling all florid, as they describe… Read more
Golden

A beer that tells you pretty much all you need to know about it in its name. It's an ale. From Prickly Moses. Designed for sessioning. However, we've got space to fill on the page (and brewer Hendo likes to talk about his babies) so what else might you like to know? Well, it's the first of two beers they're debuting during their showcase in the Chloe's Bar at Young & Jackson's. It uses lots of the Topaz hop once almost exclusively used for bittering but now being explored for aroma and flavour,… Read more
Golden Yellow

When done right, the lagers - or helles - originating from the southern German state of Bavaria are among the very best in the world: delicate, beautifully balanced and as refreshing a beer as you could ever wish to taste. We've not had the chance to taste this 3 Ravens take on the style yet, so will have to rely on the brewer's notes, which tell us it's a light gold/dark straw coloured lager with a dense head and moderate carbonation. On the nose, we're told to expect a "light, clean malt and… Read more
Pale Yellow

Well, is there anything that needs to be said about this beer? Here at Crafty Towers, we've not held back in our praise for previous batches of the Goat's Rare Breed IPA, which in its last incarnation was our most regular go to beer during the summer. We've not tasted the latest batch but assume that, having nailed it the past few times, they'll have got it right this time too. So what does that mean to the uninitiated? Well, it's what we'd imagine a beer would want to drink if a beer ever wanted… Read more
Golden

If there's one beer from the Red Hill range that craft beer lovers hang out for more than any other, it has to be the Imperial Stout. An excellent example of the style, the good news in 2011 is that they've brewed more of it than ever before. They've also allow some to condition in traditional English casks - then dry-hopped it - and will be pouring it from the hand pump at the brewery. And they've increased the bitterness compared to the 2010 version. This year's batch is described as "jet… Read more
Black

The return of an old favourite and a beer that needs little introduction, as it's one that the Goat guys had right a long time ago, back when it was part of their year range and well before the Rare Breed concept was even a twinkle in its daddy's eye. Always a beautifully balanced example of the style, equal parts rich, almost sweet, chocolate characters and bitter roastiness with a hint of coffee. Smooth in the mouth and deepest dark brown in the glass, it's a beer that never lets you down and a… Read more
Dark Brown

You might remember a few months back when the guys and gals at Goat did something of an in-house stock clearance and compiled a beer that utilised much of the grain and hops they had lying around. Seems it's that time again, with the aforementioned "Bubble 'n' Squeak" concept returning with a wintry twist. The result is the brewery's first ever porter, one which features six malts: Australian Ale, UK Marris Otter, German Rye malt, UK Crystal, UK Chocolate, and German Chocolate Wheat and… Read more
Rich Brown

In an attempt to bring a female touch to his brewery (or perhaps revealing a hitherto untapped weakness for puns) Hargreaves Hill founder Simon Walkenhorst gave his latest beer the working name Melanie. A Topaz & Amarillo India style Pale Ale, it's been brewed using fresh Topaz flowers given to the brewery by Hop Products Australia on the day they were harvested. He says the working name is in part because the beer "tastes pretty melon-y, like honeydew melon, with a healthy bitterness".… Read more
Golden

A beer that is effectively outgoing head brewer Jayne Lewis' parting gift to the brewery, this is a project that began around 18 months ago and ended with a little blending. When Goat brewed their 2009 Rapunzel - a Belgian golden ale - some was transferred into an old oak chardonnay barrel, then released nine months later at the same time as the beer was being poured through the brewery's hopinator, allowing you to sample it three ways. It turns out that when 2010's batch was made, out came the barrels… Read more
Pale Yellow

When word first came through that Murray's was producing a "premium lager", shock spread through Crafty Towers. Surely just because they've opened a new venue in Sydney doesn't mean they have to knock out a 5% Eurolager to appease the masses! Isn't that everything that the brewery rails against? We needn't have worried... "It's a piss take on the concept of a premium lager," says brewer Shawn Sherlock. "It was a standing joke that we'd never brew one and obviously we never… Read more
Golden

It seems that Black IPAs or India Black Ales or CDAs or Those Black Ones That Taste Dead Hoppy are ten a penny these days. But when this beer first appeared last year, it was a rarity - if not a first for a commercial Aussie beer. So called because when brewer Shawn Sherlock first announced to Murray what he wanted to do with the beer, he admitted not everyone would like it "but those who do will love it". "If nobody likes it, it's Shawn's fault," came the reply. Given it's back… Read more
Pale Yellow

You'll always find a special release or two on tap at the Lord Nelson whenever you pass through, but occasionally you get an extra special special release. Brewer Damon decided to hold back a keg of last year's Annileation, the brewery's annual Irish style stout complete with "mocha notes on the palate and a creamy texture". The new release has been pouring for a little while now and is due to be joined by the aged version very soon. According to the brewery it's brought a "mellow… Read more
Dark Brown

One of two new beers from the Otway brewery making an appearance for the first time at the Melbourne leg of the Good Food and Wine Show, this dark beast originally reared its head during the Prickly Moses showcase at Young & Jackson's least year. Now back, it's an India Black Ale allegedly inspired by the mysterious legend of big black cats that roam the Victorian bush. It's made with a "generous" addition of North American hops both in the boil and in the fermenter with caramelised… Read more
Black 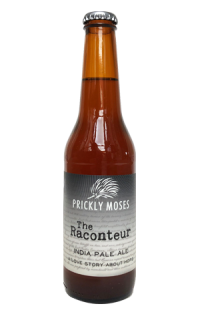 Prickly Moses The Raconteur IPA: A Love Story About Hops

Back in 2011, Raconteur was Prickly Moses' first IPA. It's a beer that had then brewer Hendo hot under the collar, hot enough to describe it as a beer that "tells the classic story of American India Pale Ale with hops the protagonist. A hop driven beer in every way, hops are added throughout the entire brewing process from the mash tun to the kettle and even the fermenter." The hops in question are the classic "Three Cs" - Centennial, Chinook and Cascade - and contributed to… Read more
Golden

It's not too often that a completely new beer appears on the Red Hill roster. They're brewers who, quite rightly, are pleased with their regular seasonals and seem happy to sit on some to age or whack the odd big one into barrels for a bit of fun. So, blow Crafty down with a feather if they haven't gone and brought out a new one. The first of what will be three dark beers this winter is an India Black Ale, essentially a British-style IPA turned black with the use of some de-husked black malt that… Read more
Black

What a lovely story this is, the tale of trans-Tasman beery love that saw Melbourne's Goats offer to help those affected by the Christchurch earthquakes by making one of Three Boys' beers and donating all profits to the recovery fund. You can read more about it here or instead save time, head out and drink a pint to do your bit for humanity. The beer was supposed to be an exact match for the Kiwi brewery's golden ale, but in the end features slightly different malts and a different yeast (due to… Read more
Golden Yellow

A beer that one punter told Crafty he'd like to take to bed, the Empress really is as sensual an experience as beer gets. Taking the brewery's Temptress as the start point – same malt bill and bitterness, same use of Dutch cocoa and vanilla beans – this originally took a journey to lands anew for the first Great Australian Beer SpecTAPular in February. As well as making it into an Imperial Mocha Porter (10 percent ABV to the Temptress' 6), the brewers were keen to give it an Aussie twist so… Read more
Dark Brown

Holgate (including the last keg)