The two-storey bluestone building that houses the Tooborac Hotel & Brewery has long been one of the most striking country pubs in Victoria. Yet, for several years after the turn of the Millennium, it sat empty - until, on a trip to nearby Heathcote, James and Val Carlin spotted the "For Sale" sign, fell for its charms and decided to give it a new lease of life.

Upon opening in late 2005, the couple was unable to get hold of a Carlton globe for the roof to let passers-by know they were open so came up with an ingenious ruse: Val bought an inflatable Santa, stuck him on the roof and word began to spread.

Before too long, the restaurant had such a reputation among locals the Carlins had to build a 70-seat extension at the rear to cope and, emboldened by their success, they decided to extend the offering. The old Cobb & Co stable was falling down and in real risk of collapse, but serendipity struck when they found a "Brewery for Sale" sign on their doorstep. The old Rifle Brigade Brewery, in Bendigo, was available so they snapped it up and set about rebuilding the stables.

Fully two years later, it was all in place and ready to go, with the first beers rolling out of the brewery in 2009. Since then, the pub has attracted ever-growing crowds to the point that it's frequently booked to bursting, while the beers have evolved – and along with them the brewery.

Having outgrown the original kit, the owner bought a larger one from Kiwi superstars Garage Project when they were upgrading themselves. It meant extending the brewery building, but the proof of the pudding has been, as they almost say, in the drinking.

The grounds have been enhanced at the same time, adding several outdoor areas, from terracing to a wide lawned area where they host semi-regular large events, including the annual OkTooberfest. They're often found at other major event too, pouring beers from a converted ambulance renamed the Beerbulance. The final piece in the jigsaw of transformation has been with its branding; Red Duck head brewer and graphic designer Scott Wilson-Browne was invited to reinvent their look in 2015, with the old school British feel replaced by something much more contemporary.

Ten minutes south of Heathcote and just over an hour north of Melbourne on the Northern Highway, the brewery offers a refreshing alternative in an area dominated by wine. It's seen the hotel grow from popular pub and restaurant to a destination in itself, helped by the onsite accommodation: a one bedroom B&B room attached to the main building and a three bedroom cottage to the rear. Visit at the right time of year and you can even catch the annual sheep shearers challenge, an event that brings in people from all across the region.

It's challenging gaining a foothold in Melbourne for any brewer or small producer these days, and it's tougher still if you're based in the regions. New venture FROM the Collective hopes to change that by bringing the country to Carlton. Tooborac, the brewery found at the rear of a historic bluestone hotel on the Northern Highway about 115km outside Melbourne, has played around with the red IPA style in the past. Clearly, they were happy with the result as a new version of that beer joins the core range in the second half of 2018. Despite the label artwork, Firemans Red IPA isn't a beer that seeks to blast you with hops and booze like many IPAs hitting the market these days; indeed, at 5.3 percent ABV, it possesses a potency more… Read more
Red 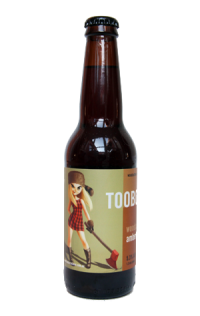 Named in honour of the woodcutters of the region who would "echo the ring of their axes as they felled the massive iron and stringybark of the local McHarg Ranges", this amber ale has been through various transitions since it was first launched. These days, it's a beer that pours with a deep amber colour, offers up toffee apple aromas before delivering all manner of malt led flavours. Look out for toffee and toasted caramel (like the inside of a Dime bar) as well as dates and a touch of… Read more
Red All of Tooborac's beers are named after the tradesmen local to the area, with this so called "in memory of the local craftsman who hewed and sculptured the iron hard granite which reflected the mason's own strength and artistry." The Stonemasons is based up the classic Aussie pale ale style, thus yeast characteristics are prominent along with some white wine like fruitiness and only a gentle bitterness.… Read more
Golden Yellow 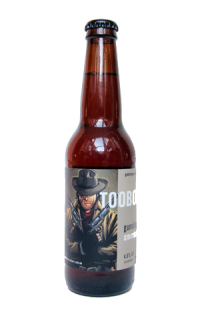 OK, so we said elsewhere that all of Tooborac's beers take their name from the traditional trades of the region. Whether "gunslinger" counts as a trade, we're not too sure, but what we do know is that this is the brewers' beer for the hopheads out there. It's also the beer that's fared best for the brewery in competitions, collecting a gold at Sydney's notoriously tough annual beer awards. It offers up punchy hops and a big bitterness for its size, contained within a deep, rusty coloured… Read more
Rich Brown Given they've held sheep-shearing contests at the hotel that is home to Tooborac Brewery, it seems only right that they have a beer named in honour of it. And it seems only right that the beer is a refreshing lager, the sort you'd hanker for after a solid days' shearing. Since the 2015 rebrand, it's presented as a wolf in sheep's clothing. In the glass, it pours a pale straw colour with lemony hops and light honey like malt aromas. It's lightly fruity, softly sweet and as easy-going as you'd expect… Read more
Pale Yellow 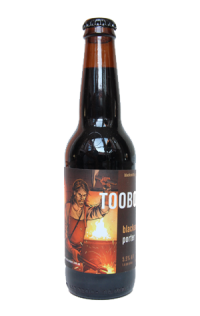 Originally a limited release from Tooborac, the Porter went on to join their permanent range. It's a sweet, fruity take on the style with soft milk chocolate aromas mixed with fruity hops that appear to taste too. There's cola like flavours as well as some earthy hops to taste too.… Read more
Dark Brown Sierra Nevada Pale Ale, Saison Dupont, Pilsner Urquell. All beers that have inspired countless imitations and all names that are treated with reverence by beer drinkers. Birrificio Italiano’s Tipopils doesn’t quite share the same recognition, despite the beer being an archetype of its own style. First brewed in 1996, the beer is often considered the classic Italian pilsner, a clean beer dry-hopped for aroma that's inspired the likes of Firestone Walker’s widely popular Pivo Pils and many other… Read more
Pale Yellow 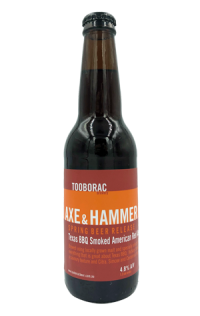 When most breweries conceive springtime releases, they tend to favour something lighter, something that anticipates warmer, sunnier times ahead. For Tooborac, they also appear to be looking ahead to such times but have honed in on one particular activity that rises in popularity as the sun starts beating down: BBQing. Axe & Hammer is a "Texas BBQ Smoked American Red Ale" – a mouthful of a style to say and a mouthful of a beer to boot. There's hickory smoked malt and smoked paprika… Read more
Rich Brown Plenty has been going on at Tooborac Brewery in 2015. It's bigger thanks to the installation of Garage Project's old brewery, it has a striking brand new look and has been producing a series of often off kilter limited releases, a sour saison and chilli chocolate stout among them. However, while they may have nudged the envelope for some of those limited release beers this year, for their final beer of the year they've kept things rather simpler. The Ca$hed Up Summer Ale is a simpler beast, one designed… Read more
Golden It's all change at Tooborac or, perhaps more accurately, change continues at Tooborac. It's been a while now since they installed Garage Project's old brewing kit at the back of their bluestone hotel on the Northern Highway in Victoria and a while too since well travelled brewer Stu Ritchie took over the brewing reins. The most recent change is skin deep, with the brewery's old school, English-inspired branding replaced with something more in keeping with the times. The first beer to bear the new… Read more
Dark Brown Chilli beers can be hit or miss. Some breweries like to use them as something of a novelty on their lineup, usually breweries that only brew small batches and sell onsite. Occasionally, they're used to dramatic nature as a one-off or annual release – or something to catch people's attention over just 85ml at GABS. Sometimes, however, chillies are added to create one subtle element of a broader beer and that's the case here. The Chocolate Sanchez winter seasonal from Tooborac takes chilli chocolate… Read more
Black Given the talk about lagers making a come back in the craft beer world, the results of the most recent Hottest 100 Aussie Craft Beers poll was a little surprising. Just one lager made the 100, the lowest in the poll's seven year history. Still, it took sours a little longer than we thought to really make headway so perhaps this will be the year the revival of Saccharomyces pastorianus really hits home. There have been a few pilsners released already and now Tooborac has pumped one out of the former… Read more
Pale Yellow While 2014 may have been the year in which saisons came to the fore and beer geeks rejoiced at the growing number of sours and wild ales on the scene, when it came to looking at the best new brews nominated by the Crafty Pint's state-by-state pickers it was variations on India red ales that cropped up more than any other. Perhaps it's little surprise that the style should be so appreciated; when done well it is essentially a meeting of lots of hops and lots of flavoursome malts. As we once wrote… Read more
Red If first impressions are anything to go by, the future is bright for the first limited release to emerge from the recently installed new brewery at Tooborac. The Smokin' Summer Ale's first exposure to the public came at the 2014 Bendigo Craft Beer Festival, where it took out the People's Choice title as Best Beer of the Festival. We're told it's a light bodied, refreshing summer ale, but one with much more going on than those words may initially conjure. Look out for an initial smoke character imparted… Read more
Golden Yellow

The first in what will become a series of Brewer's Own releases from the Tooborac brewery has just been bottled. It's an eminently sessionable dark ale, one in which you can see a progression from the brewery's classic style Aussie Pale through the gentle toffee malts of the Amber to this. Pouring a dark brown with orange hints and a thin tan head, it's a malt led number that's all about sweet chocolate and toffee on the nose and follows through in a similar vein in the mouth, where there's a hint… Read more
Dark Brown

Tooborac's new brewer asked us not to do a listing for this as he's down to the last handful of bottles. But what the hey, it's such a good statement of where Chris intends to take the tiny brewery an hour or so north of Melbourne that we thought we would anyway. Having remade the brewery's Pale and Amber to his recipes, he's knocked out the driest of dry stouts and this over the winter months, this being a sizeable dark ale (his Porter we believe) that spent two months in a merlot barrel. The result… Read more
Dark Brown