Jeremy Good came to Western Australia from the UK as a 21-year-old on a year's working visa. Nearly three decades later, he's still there, much to the delight of the beer drinkers of the Margaret River. Having fallen in love with his new country, he decided to abandon a career in IT in 2006 to focus on his real passion: brewing. It was something he'd always done in his spare time, beavering away to create the classic British ale styles he'd grown up drinking, and which he's now doing commercially with some aplomb if the Champion Lager trophy for his Pilsner at the 2011 Australian International Beer Awards is anything to go by.

Located on farmland owned by his in-laws on which he and wife Claire grow a few hop varieties, Cowaramup Brewery is a small, family-run business dedicated to serving its local community and sends only a very small number of kegs to an even smaller number of venues in the region. Established with the help of Brendan Varis, from Feral, where Jeremy used to help out on weekends before striking out on his own, it maintains a traditional approach to its beers; while some microbreweries are chasing ever weirder creations, the aim at Cowaramup is to perfect their existing range of beers, with just the very occasional seasonal release to bolster the lineup.

As for the brewery itself, it's a family-friendly set up with an 800l brewhouse in one of the Margaret River region's quieter spots. The bar and restaurant area boasts great views over the surrounding countryside, while there's a large beer garden and kids' play area. The kitchen knocks out food designed to go well with beer: pizzas, beer-battered fish and chips, ploughman's and so on.

Since opening, Jeremy's won over the locals, helped keep the large British expat community in WA happy with his traditional British styles and is attracting growing numbers of tourists. What's more, following the Champion Trophy, he's even had to give in and agree to send his beers interstate.

Margaret River has long been home to a good number of brewing companies; these days it must be the most populous of any region of Australia. One of the longest established is Cowaramup, which marks a decade since opening today. Cowaramup Brewery was established in 2006, and since that point has held a reputation for producing high quality, traditionally-minded beers to rival any brewery. Their Chocolate Porter is no exception – a beer that's steadily developed a fond following among WA craft drinkers over the last 14 years. However, in order to get your hands on one of head brewer and founder Jeremy Good’s beers you needed to visit the brewery itself, meaning a trip a few hours south of Perth to the brewpub a short… Read more
Dark Brown The first time The Crafty Pint called into Cowaramup's brewpub in the Margaret River, a new beer had just been tapped for the first time. Lightsign was the first of Jeremy Good's beers to step away from those of European (and predominantly British) influence. It was a memorable evening for many reasons. The beer, which was showcasing then new-to-the-world hop Stella (now renamed Ella), was a fruity summer ale before such things became all the rage. Jeremy is wonderful company. It's a beautiful part… Read more
Golden Yellow 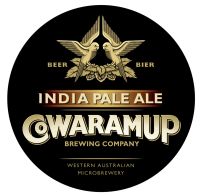 One of two beers on the Cowaramup roster that hark back to the beers the brewer grew up with in the UK. The India Pale Ale is a slightly stronger and hoppier beer than the Special Pale Ale with a bigger bitter finish. Again, it's an all English hop lineup – Target, Fuggle and East Kent Goldings initially then Bramling Cross to add a little fruitiness at the dry-hopping stage – creating an IPA that stands apart from the fruity, US inspired variants that dominate the market today.… Read more
Rich Brown 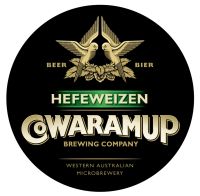 The second of two beers on the year-round Cowaramup lineup that looks to Germany for inspiration, this time to Bavaria. A refreshing, unfiltered beer with subtle banana, clove and bubblegum aromas, it's a fruity, easy-drinking thirst quencher. Light golden in colour, with a fluffy white head and the higher carbonation typical of the style, the Hefeweizen is one of the most popular beers at the brewery.… Read more
Golden Yellow 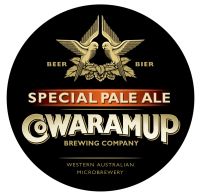 The beer Cowaramup founder Jeremy Good regards as "his beer" is a tribute to his favourite British beers: a traditional Extra Special Bitter brewed with generous amounts of Maris Otter barley, a touch of specialty and roasted malts and English hops – First Gold, Admiral, Challenger and Fuggles – resulting in a full flavoured bitter ale that's popular with the locals. Albeit, probably not as popular as it is with Jeremy.… Read more
Rich Brown 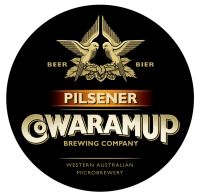 Brewer Jeremy Good originally decided to brew this German style pilsner because he figured he needed a lager on his lineup to attract the locals who had grown up drinking little else. Refined a little over the years and always treated with the respect a lager needs - conditioned for seven weeks before being released - it picked up the Champion Lager trophy at the 2011 Australian International Beer Awards, much to the brewer's surprise as he prefers his ales. Brewed with Perle and Tettnang hops and… Read more
Pale Yellow 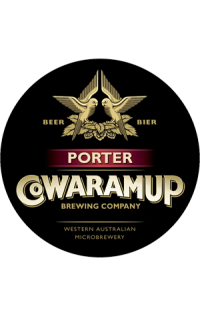 There are few beers more readily associated with England than the porter, the dark ale style that evolved in and around London through the 18th and 19th centuries. So it's little surprise to find one at Cowaramup. Jeremy describes his deeply dark, nigh on black, take on the style as "substantial ... with complex and flavoursome roasty characters".… Read more
Black

When The Crafty Pint last called into Cowaramup, it was the height of summer and this beer, named by brewer Jeremy Good's daughter and only just brewed for the first time, was the one we kept going back to more than any other. A beautifully hopped, summery ale, it's been brought out of retirement in time for summer again. Crafty contributor Pia Poynton wasted little time getting a taste of the new batch, describing it as "perfect in the beer garden under a shady umbrella". She adds it's:… Read more
Golden Yellow 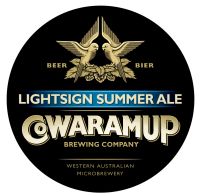 The current holder of the Champion Lager trophy from the Australian International Beer Awards (awarded for his excellent pilsner) doesn't release new beers very often. Jeremy Good, the co-founder and brewer at Cowaramup in WA's Margaret River region, prefers instead to work on perfecting his range of traditional English and German styles. Yet, in a rare break from cover, he has knocked up a batch of a beer for summer that takes its name from an idea his daughter Bethany had years ago when they were… Read more
Pale Yellow