There are plenty of breweries in Sydney. But there’s only one Sydney Brewery.

In some ways, the folks at Sydney Brewery have flown under the radar for a while: perhaps because they were comfortably servicing their own venues and a number of Rydges hotels; perhaps because their beers were previously named after Sydney suburbs, building a tight connection with locals but possibly giving outsiders the impression they had a parochial approach to making and selling beer.

But there’s never been anything small town about this big city brewery. Their beers have always been of a high quality, which is proven every time they brush past a beer competition and come away with a swathe of awards. Take the 2021 Royal Queensland Beer Awards as an example, where they went up against 70 breweries submitting almost 500 beers and took home the Grand Champion Beer trophy with a Czech-style Pilsner, as well as a fistful of medals.

When this standard of brewing meets with the Sydney Brewery’s ethos to “make the kind of brews you can enjoy more than one of, with a range that has everyone’s tastes covered,” it’s no surprise that this is an independent brewery on the move. Because despite the name, Sydney Brewery isn’t really about the place so much as it’s about the people.

Sydney is home to all kinds of different characters, and the brewery’s home suburb of Surry Hills is a particularly eclectic area that acts as a microcosm of the diverse city. This has seeped into Sydney Brewery’s DNA, to the point where they look well beyond their backyard and borders to all the weird and wonderful personalities out there and say, “Whoever you are, wherever you’re from, whatever you look like - you’re our kind of people.”

This diversity is obviously reflected in their broad range of core beers and seasonals - light and clean lagers through pale ales and punchy IPAs to the deep flavours at the darker end of the spectrum - but is also captured nicely in the design of their beers. Since the brewery’s brand refresh in 2021, each beer is represented by a memorable character that gives a nod to the stories and spirit of the area that inspired it. You can drink a Pilsner with Kate Leigh, the underworld queen of Surry Hills, or a dark lager with the Irish Seven of Darlinghurst, or a pale ale with the florally-adorned gent of Paddington… or you can simply pick a beer based on which quirky illustration catches your eye and enjoy the easy-drinking flavours.

If you’re after something different again, you’re in luck - the Sydney Brewery team also specialises in ciders, from the champagne-like Sydney Cider to their spicy Agave Ginger Cider, as well as limited releases and collabs that have included pears, cherries, and vermouth in the mix.

It’s up to you how you want to experience Sydney Brewery. You can snag daily specials and tap along to live music at their home brewery in Surry Hills. You can sip nectar after work at The Cidery in Sydney’s CBD. You can spend a whole weekend discovering their production brewery and venue in Lovedale, the beating heart of the Hunter Valley.

Or you can enter a bottle shop in another part of the country, pick one of the colourful cans from the fridge, and befriend the character making eyes at you from the label.

Wherever you’re from, you’ll quickly realise that this is not ‘a’ Sydney brewery. This is Sydney Brewery.

Australia's craft spirit industry is enjoying a rapid rise not dissimilar to that enjoyed by beer in recent years. The connections between the two are strong, particularly at a growing number of breweries that are distilling in house.

It's not all wine, you know. The Hunter Valley now has four breweries amid the vines. Neil Richardson took a tour of them all for this Crafty Crawl.

Five years after it brewed its last beer in the city, the Sydney Brewery has returned to its roots with the opening of a new brewery in Surry Hills.

Sonic seasoning is an experimental concept that uses sound to affect perception of flavour. Sydney Brewery joined music artist Hylander in combining a Galaxy-forward beer and spacey soundscape to create music for your mouth.

Sydney Brewery claimed yet another major trophy for one of their lagers at the 2021 Royal Queensland Food and Wine Show Beer Awards, taking our Grand Champion Beer for their Pilsner. Thanks to decades of concerted effort on the part of multinational brewers, lagers have managed to achieve almost complete domination of this country’s (and the world’s) beer consumption. Yet, at the opposite end of the industry, the resurgence of smaller breweries has been almost entirely built by brewing anything except lager. So when a brewery has not one, not two, but three lagers in its core range, it’s worth paying attention.? Why Sydney Brewery’s Lager and Pilsner will fit many people’s… Read more
Rich Brown Like a great many pales these days, Sydney Brewery’s Pale Ale is based on the hop forward US interpretation of the style. Yet, despite the addition of Cascade, Galaxy and Amarillo, it feels like more effort has been put into chasing balance than it has to overwhelm the drinker with lashings of fruity flavours. So while you do get those, starting with citrusy and floral aromas, it’s all relative. The malt is a feature, but not the star. The bitterness is big, but not too big. Those hops are pronounced,… Read more
Golden A century ago, Surry Hills was home to Kate Leigh, the shady underworld madam who traded in booze and cocaine, ran gambling syndicates, and kept Sydney’s notorious razor gang wars going strong. Today, Surry Hills is home to an old Czech fellow who brings his own glass into Sydney Brewery for his regular beer at his local watering hole. I’ll let you decide which Surry Hills character you’d rather have a drink with. If Sydney Brewery’s Lager tries to win drinkers over by showing off all the… Read more
Golden Yellow When Sydney Brewery moved the bulk of its production from Sydney to the Hunter Valley, it seemed only right to dedicate a beer to its second home. But while this beer is no longer named ‘Lovedale Lager’, it’s now attached to an image of the one of the eagles that soars majestically above the Hunter Valley. It’s a faithful interpretation of the classic German beers that, along with those inspired by Czech pilsners, took over the world. But don’t take our word for it; ask the judges from… Read more
Pale Yellow Sydney Brewery is one of the few breweries around that also takes cider seriously, with both core range and seasonal offerings, not to mention a fair few gold medals garnered along the way. The Original Sydney Cider is crystal clear and sparkles like a diamond, with just a hint of yellow in the light. It's a little like liquid bling – made from fresh crushed apples from Adelaide Hills, fermented with champagne yeast and best served in a wine glass. But, if fancy isn’t your thing, it can be as… Read more
Pale Yellow If you want to go straight to the fruit bomb end of Sydney Brewery's range, it’s time to hit the East Coast IPA. In these oh so hazy days, don’t let the lack of opacity fool you into thinking you won’t get much juiciness here. This beer gives just a wink to its cousins from New England with a little natural haze, yet as soon as you’re within an arm’s length of this beauty you’ll get it. It positively jumps out of the glass, filling your face with huge, sticky aromas of mango and pawpaw.… Read more
Golden Yellow Life’s pretty good out in the East of Sydney. From Bondi to Bronte through Tamarama, it’s all about blue skies, beaches, buff blokes and babes... and anthropomorphic blue swimmer crabs in budgie smugglers, apparently. Blue Swimmer Summer Ale is the definition of crisp and refreshing. It’s hopped with Citra, which gives a touch of passionfruit and other tropical fruits, but really it’s all about being light, bright and breezy. This is the kind of quencher you want in your hand as soon as you… Read more
Golden What looks like a wine, smells like a wine, tastes like a wine, but isn’t a wine? An American blonde ale hopped with Hallertau Blanc. The Single Hop Blonde from Sydney Brewery pours a pale, almost powder yellow, suggesting the wine characteristics of the Hallertau Blanc hops. Swirl and sniff, and get those white wine aromatics of lemongrass, citrus, and green grapes. Take a sip, and the low body and crisp finish could almost have you fooled into thinking you were tasting a dry riesling. But the… Read more
Pale Yellow 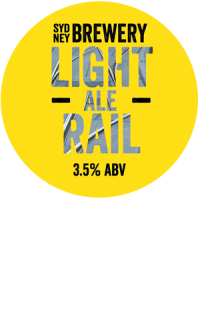 Brewer's notes: A session beer that still appeases the need for flavour. A copper hue runs through this Californian common, with balanced additions of Northern Brewer and Galaxy hops on the pallet and a hint of Amarillo on the nose.… Read more
Golden Beginning life as a one-off collaboration between the Sydney Brewery and Pyrmont’s Quarryman’s Hotel, the Pyrmont Rye IPA proved so popular at the pub that it became part of the brewery’s core offerings and has gone on to spawn a bigger sibling. This is comfortably the most robust beer of the brewery’s regular range, a hop-forward drop based on five American hop varieties which bring big licks of pine and fruitiness. There’s a touch of residual malt sweetness before the rye chimes in with… Read more
Golden Given events of the 1700s, Sydney will forevermore have a connection with England. It therefore makes some sense that the Sydney Brewery should have a beer in its range which has a nod to that connection and they’ve opted to do so with the Pittwater Bitter, their take on the classic Extra Special Bitter style. Upon first introduction you’re met with aromas of caramel and dried fruits before the first sip takes you away on a wave of earthy hop character – courtesy of the traditional Styrian… Read more
Rich Brown Potts Point is a creature of the night. It stretches right out into the black water, leaving the city behind and contemplating the depth of the darkness. And yet, back in the thick of things, it’s known for nightclubs, the dancing, and the bouncing and the neon lights. Potts Point Porter shares this tendency for the darkness. It sits in the glass a thick brown, with just a glint of red around the edges. It's surprisingly nimble for a porter, neither heavy in the mouth, nor inert and one dimensional… Read more
Dark Brown Sydney Brewery's Oxford XPA is all about the hops. It's a beer that brings all the colours of the hop rainbow to the nose and mouth – tropical fruits, citrus, some pine, a hint of flora underneath, and a solid punch of bitterness to boot. There’s just enough malt to sweeten the body and carry the fruits along, but not so much to distract from the bitter assertiveness. Mick Wust… Read more
Pale Yellow