Like Field of Dreams, minus Kevin Costner and the schmaltz, The Public Brewery is living proof that if you build it they will come.

There was little in the way of craft beer in the part of Melbourne’s outer east around Croydon, yet thanks to the vision of local café owner Dale White, by the mid-2010s the suburb was home to one of the best-looking and busiest brewery venues in Victoria.

The Public Brewery’s story began when Dale noticed a former grain store and auction house that was falling into dereliction was going to be pulled down and replaced with a factory. He wondered whether it wouldn't be better put to use as a venue with a brew-your-own facility at its centre; he'd enjoyed a day at a similar business years earlier, albeit one where the hospitality side of things had left much to be desired. What if he could create his own, pass on the joys of the experience he'd had, but do it better?

At the end of 2013, The Public Brewery began to open in stages. First came the bottleshop stocking nothing but Yarra Valley wines and independent Victorian beers, then a venue with bar, kitchen and beer garden (growing herbs and hops for use inside), finally the various brewery elements: eight 50 litre brew-your-own kits and a 250 litre microbrewery upon which they started brewing their own beers.

And, straight away, they came. With nowhere between Melbourne's eastern suburbs and the Yarra Valley offering anything like this, especially in such carefully considered, rustic, charming surrounds, the place was soon busy – with families, beer lovers, wannabe brewers – and has never looked back.

On the beer front, the brewery has for the most part, focused on creating approachable beers with broad appeal, while also collaborating frequently with friends from the Victorian industry. An offsite production brewery followed in Warrandyte in early 2016.

Having helped transform drinking habits in Croydon and surrounds, the team at The Public Brewery used the COVID shutdown of 2020 to undergo a spot of transformation of its own, emerging reborn and, you might say, better than ever.

Despite all the changes, the patronage the venue receives has remained the same, as has the approach to brewing. On the beer front, the brewery continues to focus predominantly on creating approachable beers – pale, red and session ales lead the way, plus a lager and light beer, both of which are always popular with their regulars.

Then there’s their seasonal range, which chops and changes, meaning there’s likely to be something new each time you pay a visit, from an evolving range of sours to IPAs and brown ales.

All in all, it's safe to say the founders were right in their hunch this part of Melbourne was ripe for something crafty. 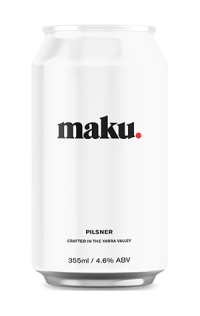 In 2019, The Public Brewing Co kicked off a new brand under the Maku banner, with the name alluding to the goddess from Chinese mythology who shares a close affinity with hemp. The first beer, a hemp session ale, has steadily spread across Melbourne and into other parts of Australia. Now, a little after the midway point of 2021, it has been joined by a new member. This time around the beer doesn't feature hemp – although there are other hemp-based beers from the brewery on the horizon – and… Read more
Pale Yellow In Chinese mythology, Maku is a goddess connected with the elixir of life and often she shares a close bond with hemp. Being the world’s oldest domesticated crop and one often associated with sustainability practices, the connection seems a reasonable one. It’s a link The Public Brewery hope to draw upon in their latest endeavour, a collaboration with the Yarra Valley Hemp Company designed to showcase the crop’s versatility. The first release under the Maku banner is labelled Hemp Session Ale… Read more
Rich Brown 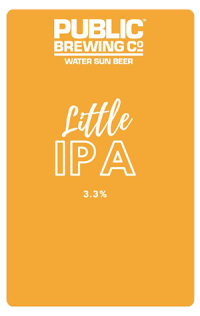 The Public Brewery in Croydon decided early on to put energy into designing a light beer that would satisfy their desire to offer a sensible option over the bar while delivering an impact that would satisfy those looking for something approximating a bigger crafty beer. The Feather Weight has gone on to do that for them, finding its way onto many a beer list as the light option too. And now they've come up with a mid-strength that aims to do similar, albeit ratcheted up a few notches. Little IPA… Read more
Pale Yellow Encouraging responsible drinking as well as an environment that's welcoming for people of all ages at his venues is a core part of what drives Public Brewery. Thus the development of a crafty light beer has been central to the brewing side of the business from fairly early on in the Croydon brewery's life and the beer that came as a result of that development is Feather Weight. The "Craft Light" weighs in at just 2.9 percent ABV but looks to make the "light" appropriate for nothing… Read more
Golden Yellow A beer that tells you what's in store from the moment you read its name (if you're a bit of a beer nerd at least). The red is obvious: here's a red ale that floats colour wise around amber / chestnut. The Falcon is a reference to Falconer's Flight, a hop blend from America's Pacific Northwest named after one of the pioneers of the beer scene there and designed for hoppy beers such as IPAs. Here the pellets are added to a hearty malt base that's all about creamy toffee, caramel and toasted flavours.… Read more
Red In the early months of operation, it seemed that barely a brew of The Public Brewery's pale ale went by without it being tweaked or used to showcase a different hop variety or combination of them. Now, however, with output significantly upped thanks to the opening of a second production facility (at the 100 Acres site in Warrandyte) it seems that the brewers have settled on a formula they're happy with. It's a formula that takes the idea of an American pale ale but looks to create it with all Australian… Read more
Golden Yellow The Public Brewer ethos has always put locals and the local community at the heart of the operation. And while they've brewed beers in many styles over the years – smashed avo sour, anyone? – that means there's always been a desire to have simpler, more approachable styles, from pale ale to light beer, on the menu. Public Draught slots into that part of their beer offering, inspired by classic pilsners from Europe but with plenty of Aussie character about it. Pouring a pretty clear golden colour,… Read more
Golden Depending where you exist on the political spectrum, you may feel that The Donald's rise to the pinnacle of power in the US offers little that could be regarded as good. That said, he's been a godsend to satirists and the wider world of humour (intentionally and otherwise), with his impact even being felt in the Australian beer world. Such as here, where The Public Brewery and Bad Shepherd got together to make a beer: an American wheat that borrows its title from his campaign slogan and its decal… Read more
Pale Yellow 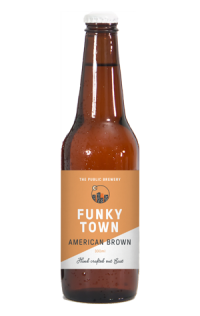 Originally titled the Get Down American Brown until brewer Brendan realised fellow Melbourne-based brewing company BrewCult had a beer of the same name, Funky Town is The Public Brewery's take on US style brown ales. Typically, such beers take as a starting point the brown ales first popularised in the UK several centuries ago and ratchet up the dials. Here, however, while some of the dials – those marked "hops" and "malt" – have been given a hefty flick, the one marked "alcohol"… Read more
Dark Brown