It’s a story that’s surely as old as the beer industry itself: a couple of mates start homebrewing, they get good at it and, at the behest of a few keen friends with complementary skills, decide to have a go at brewing commercially. That, in essence, is the Block ’n’ Tackle story. But, of course, that is hardly the full story.

Theirs begins in a couple of garages in Avoca Beach – one of the many waterside hamlets that make up the Central Coast region of New South Wales – where, for over a decade, Michael “Pep” Pepper and Al Jones had been immersing themselves in all grain home brewing, first alone, then together. Their setup was fairly ramshackle and quite typical of homebrewers’ DIY inventiveness; one of their particular quirks was the use of a block and tackle to lift full mash tuns into the air where gravity would ease transfers to the kettle.

Having conquered the Avoca Beach backyard barbecue beer scene, Pep and Al were encouraged in their endeavours, then eventually joined, by friends and fellow locals Brett Brown and Greg Tobin whose skills sat more towards the business and marketing side of the equation. In 2015, with the necessary pillars of partnership in place, the foursome set up the Avoca Beach Brewing Co. But to the public it would be known as Block ’n Tackle.

Still working day jobs, the group poured all its spare time and money into building the Block ’n Tackle brewery in a warehouse in nearby Kincumber. In essence it was the garage setup with more space to move but they soon added a larger (albeit only slightly larger) Braumeister system, some bigger fermenters and, the crowning glory, a bar from which to pour their wares. Yet it was not all straightforward as they began to reckon with some archaic legislation that imposed conditions such as early closing hours, no possibility of live entertainment and, most troublesome for a brewery bar, a serving limit of a single 150ml tasting glass of beer, per person, per day.

Yet, despite those impositions – ones apparently not faced by any other brewer in the state – the word still spread and people came to see what this place was all about. They had begun nailing down a core range of generally approachable beers that were steeped in the rich history of shipbuilding that once blossomed opposite the spot where the brewery now sits; Jon Piper was a founder of the local shipbuilding industry so he was honoured with an IPA; the Red Lizzie amber ale for the esteemed wife of one of the industry pioneers; Rock Lily pale ale for the last ship to sail from one of the major shipyards.

The strict limit on tasting glasses had the effect of pushing demand towards takeaway bottles and mini-kegs, Block ’n Tackle’s striking silver alternative to growlers. This proved just enough for the brewery to keep paying its way and consider how it might, one day, be able to grow. With support from a sizeable band of loyal customers who could see what Block ’n Tackle was trying to offer the local area, and having towed the legislative line for a year, they successfully petitioned the state government to relax some of the licensing restrictions.

The one taster per person per day rule was mercifully dropped so visitors can now enjoy a multiple beer tasting paddle, or even a full sized beer – albeit with an idiosyncratic condition whereby if you want something roughly equivalent to a pint you’ll receive it in five smaller tasting glasses. The hours were extended, meaning you can now sit and enjoy a beer as the sun comes down in the long evenings. Live entertainment was given the all clear, too, which breathed a creative energy into the otherwise industrial space. Block ’n Tackle has even been added to the area’s well worn tourist trail which brings plenty more people to their door.

The brewery now has eight beers on tap at any one time, with a core range of six supplemented by two regularly changing seasonals or limited releases. There is no full kitchen but they’ll happily prepare a mezze plate where one of the features is a cheese made from the brewery’s Sir Thomas Porter by their friends at the award winning Little Creek Cheese.

While the setup remains small and most of what they make is sold direct from the brewery, Block ’n Tackle has been gradually building ties with the local community. You can now find the beers at a handful of good Central Coast venues, they’re an ever-present fixture at local beer festivals, have collaborated with near neighbours Six String and even auctioned off their first anniversary beer – a whopping Russian Imperial Stout – for a local children’s charity.

The garage days may be officially gone but the brewery carries on with the same laid back, convivial vibe of the Avoca backyards, these days under the ownership of Paul Wakelin after he took over the business from Greg and Pep.

It may not have all been smooth sailing for the crew of Block ’n Tackle but, like the area’s shipbuilders of yesteryear, they seized an opportunity to construct something from nothing and have created something that Central Coast locals can be justifiably proud to call their own.

On tap at Block 'n Tackle

In his last Best New Beers roundup before he heads back to New Zealand, Nick Oscilowski commandeers the votes of many to land upon a list that flits from barrels to peat to the rainforest and back – and even includes a humble pilsner.

Behind Bars is where we get in touch with retailers across Australia to find out what's hot with them and their customers, and get their insight on the evolving beer world. Here we chat to Central Coast legends Oldfield Cellars. On a visit to the Central Coast, you’ll likely notice that the main estuary in the area is called Brisbane Water. It’s named for former Sir Thomas MacDougall Brisbane, a former state governor who apparently followed a diet of traditional religious faith and generally staying on the straight and narrow. It’s perhaps somewhat ironic, then, that Block ’n Tackle has named its Sir Thomas Porter after him. A porter that follows the traditional sense of the style, it’s replete with roast, chocolate… Read more
Black Jon Piper IPA Jon Piper was evidently a pioneer of the local shipbuilding scene and ultimately proved prolific, constructing somewhere in the region of 25 vessels over 35 years, a more than decent return for the mid 1800s. Thanks to this longevity and prolificacy he has a hand in training many shipwrights and ensuring the continuity of the local industry (at least, for a while). For that he is, at the very least, deserving of having a beer named after him and he arguably got Block ’n Tackle’s… Read more
Golden "Lizzie" was the wife of George Frost, one of the pioneers of the Kincumber shipbuilding scene, and by all accounts was a bit of a legend, doing much for the community in her life of more than nine decades, including raising 18 children (yes, 18). You can imagine how well a cold beer might go down at the end of a day looking after that mob and this eponymous American amber ale, were it around 100 years ago, surely would've done the trick. Thanks to Topaz, Centennial and Amarillo hops, it’s… Read more
Red The area around Block ’n Tackle’s Kincumber brewery was once a hub for ship building and one of the most noteworthy figures of the industry was one George Frost. When his shipyard closed in the early 1900s, the last vessel to pass down the slipway was the SS Rock Lily. In order to keep this part of local history alive, Block ’n Tackle decided to name their pale ale after it. It’s an all-Aussie affair with locally-grown pale and Munich malts doing the legwork, a touch of Crystal malt adding… Read more
Golden Yellow Music and beer are best when they’re hand in hand and plenty on the Central Cost will have had a good day out with both at the Wharf at Wagstaffe, a literal music and arts platform that showcases the best local artists. In homage to the beloved institution, the Block ’n Tackle boys decided to name their easy-drinking witbier after the place. Waggy Wit is a fairly traditional, unfiltered, Belgian-style wheat beer that comes complete with the addition of coriander and orange zest, both of which… Read more
Pale Yellow The natural first port of call in Block ’n Tackle’s nautically-themed core range is the Rip Bridge golden ale. While not a mid strength beer it is a light beer in terms of flavour and colour, one made with pale Aussie pilsner and wheat malts and hopped with Nelson Sauvin. Named for The Rip, the narrow gap which separates the nearby estuary from the open sea, the beer is the symbolic “gateway” beer which anyone – craft beer novice or otherwise – can sip away at happily any time of the… Read more
Golden Before the arrival of summer, the guys at Block ’n Tackle decided to add something extra to their range; something hoppy and full flavoured but light and quaffable too. The something they settled on was an XPA. In keeping with the brewery’s nautical theme, the beer was called Scud (the ship from which it takes its name is famous for mysteriously disappearing off the Central Coast back in the 1850s) and it very quickly found favour with locals who downed every last drop in record time. So they… Read more
Golden Yellow The release of the second anniversary beer from Block ’n Tackle could be seen as the sign of a brewery hitting its stride. The Central Coast business has faced more than its share of hurdles over the past two years, but they’ve battled through each one and appear to have come out the other side in fine form. This is a place that’s gotten by, in the main, by making fairly approachable beer styles and serving them to locals directly from the brewery. But it’s noticeable how the envelope is… Read more
Black 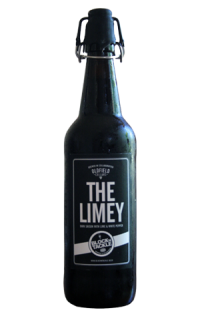 After a slow start – at least when compared with many other populous parts of the country – the fortunes of beer drinkers on the NSW Central Coast have been changing for the better in recent years. Slowly but surely new breweries have been opening up and bars and bottleshops have been getting tempted into craftier waters, never to look back. To further encourage this collective pursuit of better things, two of what you might call the new breed, the Block n Tackle brewery and Oldfield Cellars,… Read more
Dark Brown With the winter weather having settled in on the Central Coast, the guys at Block 'n Tackle have decided to release something that offers a little extra oompf and comfort to locals on these cooler days and nights. Big Ben is a Belgian style blonde ale, so it's one where the emphasis is all on the yeast and malt. They've used a simple base consisting solely of Pilsner malt upon which the banana and fruity esters and spicy phenols of the yeast are able to shine. It's not a beer for hop heads as very… Read more
Pale Yellow One of the quirks of pilsners is that they’re so widely consumed globally yet relatively few craft brewers pay them much attention. And, if you should come across a craft brewery that releases a pilsner, you’ll often find it’s amongst the least talked about beer in their range. Try as you might – and you can throw the thesaurus at it – there are few sexy or unique selling points to a beer whose general existence is derived from a quest for subtle flavours and fine balance. Yet those very… Read more
Pale Yellow