There’s something uniquely appealing about a brewery that brings together the traditions of the Czech Republic with contemporary Melbourne. Historically speaking, the former is the birthplace of pilsners and considered one of the most important beer cultures in the world.

While Melbourne doesn’t share the same long-established prominence, in more recent times it has become known as something of a leader in Australia’s craft beer industry.

Brunswick’s Foreigner Brewing Co, which first opened its doors late in 2016, manages to combine those two disparate brewing cultures. It’s the work of Mira Koman and Peter Denison, who originally hail from the Czech Republic and met through Melbourne’s expat Czech community.

Brought together by their love of beer as much as their shared heritage, the pair soon started homebrewing. Like many Australian craft brewers, Peter and Mira quickly developed plans to go professional and looked to upsize their production scale. Unlike most breweries, however, Foreigner was largely built by one of its brewers.

Mira’s professional background as a boilermaker brings with it a handy set of skills for someone looking to build their own brewery. Aside from the fermenters, he built the rest of the six-hectolitre brewery, often in spare moments fitted around his day job.

While it may be a small brewery by commercial standards, for Mira and Peter the plan was always to start small. It means most of their beer is sold a few metres from where it is made, and also gives the two of them the opportunity to talk about their story and their beer to whoever walks in. And, given the fact they are located a ten minute stroll from Sydney Road and Brunswick Station, it’s the type of brewery that Melbourne’s northern beer drinking community should be walking into.

The proximity of the brewery to all manner of public transport, as well as Brunswick’s young population, makes Foreigner’s location one likely to have some Melbourne breweries casting an envious glance. It’s located in an industrial block featuring row after row of concrete units and roller doors, behind one of which you’ll find a few tables, barstools and beer. During opening hours, expect to find those doors wide open, with vintage records being spun and bar snacks shared around.

If you're looking for a larger meal, Brunswick Burrito is located next door with tasty vegan burritos and tacos constantly being brought across to the brewery's tables. Undeniably, the best spot to enjoy Foreigner's beers is from that small Brunswick bar but slowly, the brewery started to bottle their beers and from 2021, began canning too.

Speaking of the beers, unsurprisingly Foreigner has a keen focus on Czech lagers, brewed using traditional methods and recipes. Both their mid-strength and full-strength lagers are packed with Saaz hops and they refer to them as “10 degree” and “12 degree” beers respectively, in reference to the way Czech brewers measure beer on the plato gravity scale.

Peter and Mira also have a level of authority to claim their lagers are as traditional as they come, particularly since the recipes were designed with their friend Petr Petruzalek, who spent more than two decades brewing at Pilsner Urquell.

Yet, keeping true to their current home of Melbourne, Foreigner also brew styles better associated with the modern beer movement. This includes the likes of American-hopped IPAs, Galaxy-packed summer ales and dark ales.

Indeed the beers – much like the rest of the brewery – show that Peter and Mira know how to pair the old world of brewing with the contemporary beer scene. And, for Australian beer drinkers, it’s a cross-cultural beer experience that adds diversity to an increasingly fascinating local landscape.

It's not unusual for you startup breweries to seek advice from experts. They don't often fly them in from the other side of the world, however. Will Ziebell meets the former Pilsner Urquell brewer assisting the team at Brunswick's Foreigner. The regal-sounding (and looking) Richard X is Foreigner Brewing’s homage to one of the people who helped them most when they first started out. Petr Petruzalek is a close friend of Foreigner’s two owners and, having spent more than two decades working at Pilnser Urquell, he was well placed to help them design their mid-strength pilsner. Petr was encouraged to apply for a job at Urquell by his uncle Richard so we can assume that, without him, Petr’s life could have taken any number of turns.… Read more
Pale Yellow Something of a flagship for Foreigner Brewing, Silent Hunter is a traditional pilsner where it isn't just recipe that's steeped in history. Named after a hill near the brewery's cofounder Mira’s Czech hometown, the moniker comes from a local legend involving a woman walking in the woods with her two children. As a hunter approached, the story goes that the woman told her children to make sure they were silent. While the technical translation might be “Silence, Hunter”, that doesn’t quite… Read more
Pale Yellow 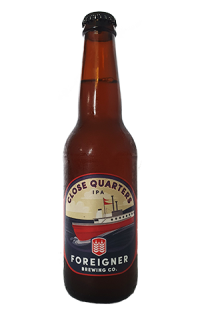 American style IPAs might come from a different ethos to the pilsners of the Czech Republic, yet they're very much where many craft beer drinkers sit these days. Thus you'll find them pouring from the taps at Foreigner's Brunswick home. In this case, the beer features Simcoe and Mosaic within a crystal clear, light and slightly amber American-style IPA. Those hops are well and truly this beer’s main attraction, with a big hit of pine and a resinous sweetness rolling together in the glass. While… Read more
Golden Foreigner Brewing’s core range pale ale, Permanent Resident, is a beer that's a little unique for the Brunswick brewery. That's not because it features new world hops either, for a few of the Brunswick brewery's other releases do that as well. Instead, it's one fo the few label designs that doesn't feature imagery from the Czech Republic, instead showing a bush landscape filled with eucalyptus trees and a man in a welding helmet front and centre as a reference to the brewery’s cofounder Mira… Read more
Pale Yellow It’s probably quite safe to say that there aren’t too many breweries in Pilsen with core range, Black IPA’s but just because Foreigner is founded by two Czech expats, it doesn’t mean that the brewery must always follow that path. Dark Times is the Brunswick brewery’s regularly-brewed black IPA and while it might be a long way from pilsner territory, it bears one big similarity in the fact that it's best enjoyed by the schooner or can. For while it’s a dark beer that contains a slightly… Read more
Pale Yellow

If you’re a Melbourne brewery founded by two Czech expats then the choice of beer to mark your first birthday should be a pretty straightforward one: take the world-conquering style which originated in your homeland and make it bigger and bolder. So that's what Foreigner Brewing Co did, by brewing an imperial pilsner to celebrate the occasion. Featuring the traditional Saaz hop and somewhat less traditional Ella, before being dry hopped with New Zealand’s Motueka, it’s a beer that to blends… Read more
Golden Yellow

The story behind Foreigner’s Rixdorf is a reference to the fact that a couple of Czech brewers are making a German wheat beer. Rixdorf is one of Berlin’s trendier neighbourhoods, but once it was a small village outside the city that was predominately populated by Czech nationals. Much like the original Rixdorf, there’s much that's traditional with Foreigner’s wheat beer: plenty of yeast-derived banana, cloves and bubblegum that burst out of its fluffy white head. In terms of flavour, it’s… Read more
Golden

Foreigner Brewing’s summer ale shows the Brunswick brewery is willing and able to brew styles well and truly outside their Czech roots. The fact the beer is heavily hopped with the likes of Galaxy and Chinook also shows that they know their way around New World hops. Australian craft drinkers’ palates have become so used to Galaxy over the past few years that there shouldn’t be too many eyebrows raised by those used to its passionfruit and citrus aromas. Yet this summer ale does offer some… Read more
Pale Yellow

Foreigner Brewing’s dark ale is a classically styled and well balanced beer that delivers aromas of dark chocolate and roasted coffee. On the palate, those roasted flavours of coffee and chocolate continue while the beer finishes slightly dry with a nicely roasted bitterness. As it warms, you'll find cocoa and a nutty quality developing, making for one of those drinkable dark beers occupying a space that makes it almost as enjoyable during long summer days as it is in the middle of winter. Will… Read more
Dark Brown