In a craft beer world filled with experimental recipes and exotic flavours, sometimes all you want is a straightforward, everyday beer. At least, that’s the motivation behind Pat Casey’s eponymous brewery in Penrith.

Pat has been in the business of beer for fifteen years. A keen homebrewer since he picked up the art back in England many moons ago, he opened his first homebrew shop, Blue Mountains Brewing Supplies, at Faulconbridge in 2003. Currently, he is the owner of Absolute Homebrew at Penrith, his second homebrew store, which opened at St Marys in 2006. Since opening the first store, he’s seen plenty of beer trends come and go, but has recognised the consistent demand for good quality easy drinking beers.

Thus, he decided to start his own brewery to produce exactly that. The centrepiece is a second-hand, steam-powered, 1,800 litre Bohemian Monobloc Brewhouse sourced from the USA that has retained its original copper jacketing. In 2015 – a few unitanks, a mill and a bottling line later – he was almost ready to complete the picture. Before jumping in headfirst, though, he decided to iron out a few kinks in the system first.

Initially, Pat rented out his tanks to some of Sydney’s gypsy brewers, giving them the opportunity to scale up their beers while giving him the opportunity to test out his setup. He had a go on his own system too, contract brewing for various companies. Eventually, he gained the confidence and raised the capital for the last piece of the puzzle: his own cool room. Then, jigsaw complete, production of the Casey’s range finally began.

The core range consists of three beers – Lounge, a pilsner-inspired pale golden ale, Night, a malty black ale in the tradition of NSW Old beers, and Tifter, a “3C” bitter amber ale named for the three hops it contains: Centennial, Chinook and Cascade. Every two to three months, these are joined by a different seasonal beer, keeping the range at a manageable four or five.

Yet, the most unique feature of Casey’s Beer is not the beers themselves, but rather how they are sold. Aside from the occasional tap at the pub or odd bottle on a shelf, the majority of the beer is delivered straight to the customer via a home delivery service. The packaging is designed especially for posting, and Pat uses Australia Post's wine delivery service to ensure the best care in delivery. Punters can choose between straight cases of any of the three core beers, or a mixed case containing the cores plus whatever the current seasonal happens to be. And, for those who wish to try before they buy, the brewery is now open four days a week for tastings and sales.

You can join brewery tours on Sundays and get growlers and kegs filled or take advantage of party keg hire service.

And if that's not direct-from-source enough, as of the second half of 2021 you can join Pat at the bar. Six years on from opening the brewery, he finally got to open it to locals and visitors alike, as you can read here, meaning you can taste what Pat's been brewing next to the tanks the beers are brewed in every Thursday to Sunday. 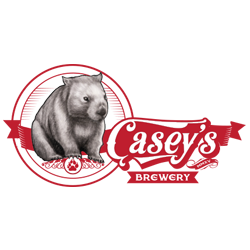 After spending six years keeping Penrith locals well supplied with takeaway beer and fresh wort, Casey's Brewing have finally opened a bar. We caught up with founder and head brewer Patrick Casey to find out more. The core beers from Casey’s Brewery have a simple aim: to be straightforward, easy-drinking, everyday beers, enjoyed from the comfort of home. And the exact location intended for such drinking also happens to be the name of this beer. Lounge is a pilsner-inspired, pale golden ale that's the very first style Pat Casey brewed in commercial quantities back in late 2016. The pilsner inspiration is clearly evident in the malt, which gives the beer a light, straw yellow colour. That’s backed up by… Read more
Golden Yellow The word "tifter" is British slang for a gentleman’s hat (hence the label) but this beer is about as un-British as they come. The most bitter of the three core beers, Tifter is a “3C” hoppy American amber ale. The “3C” refers to the three American hops used – Centennial, Chinook and Cascade – all of which are either added late in the boil or via dry-hopping in the tank. The result is a rather bitter beer, yet with beautiful floral and citrus flavours. In order to balance things… Read more
Red Inspired by the much-loved Toohey’s Old and Pat's days as a homebrewer in the UK, Night is a bolder and drier take on this longstanding NSW favourite – a hybrid of English and Australian flavours. No less than six different malts make up the bill, starting with light ale and Munich malts, before moving to the darker and more prominent caramel and chocolate varieties. The roastiness of these malts is most prominent on the nose, backed up by sweet yet dry flavours of toffee and chocolate in a… Read more
Black