At Pioneer Brewing, they truly make their beer from the ground up.

It began in 2017 when Pete and Tamara Gerber built a 500 square metre brewery shed in the middle of a paddock on their farm near Orange, NSW. With a background in engineering, Pete designed and managed the build of the brewhouse himself (and also handles ongoing maintenance and repair – a saving grace for a regional brewery).

Right from the start, Pete and Tamara were determined to make beer that showcased the land on which they live. Only a few breweries in Australia can boast that they grow their own malting grain, but almost all of the barley, wheat and rye that goes into Pioneer’s beers is grown on the Gerbers’ property. At harvest time, they send their bounty straight over to Voyager Craft Malt, where it’s malted then promptly returned ready for brewing. The result is beers in which their malts shine through, with most tinnies proudly stating “100% Pioneer Grown Malt” on the label.

(The Gerbers also have plans to grow their own hops – watch this space.)

As well as capturing the taste of the land, Pioneer Brewing to the sky in the crafting of their beer. They brew with clean rainwater harvested on the farm (which is no mean feat in drought-ridden regional NSW), and have a 50kW solar power system that drastically reduces the carbon dioxide emissions of their brewing setup.

“Being farmers,” Pete says, “anything we can do to minimise our waste is obviously what we do.”

Spent grain, often blended with protein-rich waste yeast and spent hops, is used to feed the happy sheep on the property. The crops benefit, too: spent hops are repurposed as fertiliser, and wastewater from the brewery is treated for use in the lucerne paddocks. Sustainability is always at the front of the Gerbers’ minds.

But, while the farm brewery is creeping closer to being self-sufficient, it’s by no means isolated. Pioneer are part of something bigger – the burgeoning food and drink tourism of the Orange region. Between fine dining restaurants, clusters of picturesque wineries with cellar doors, and Pioneer making beer with grain grown onsite, the area is becoming a destination where people can explore the provenance of their food and drink.

For Pete and Tamara, that means getting to showcase their beer at their taproom. It may be at the end of three kilometres of dirt road, but that hasn’t stopped visitors coming from far and wide – some even arriving by horse, helicopter, and hot air balloon – to get a taste of the land at Pioneer.

“People are incredibly interested in where their food and drink is coming from,” Tamara says. “We want to be a destination where people can come back and connect with the country.”

To this end, Pioneer run brewery tours every Saturday complete with a tasting of the ten beers on tap, and sometimes even take punters for walks to look at the crops.

“It’s not solely about the brand; it’s about what it means to be Aussie farmers, how beer’s produced, consumer awareness of independent beer in Australia… not all beers are the same,” she adds.

Of course, a tour and a tasting isn’t the only way to enjoy the taproom experience. It’s perfectly okay to just order an Amber Ale to go with the Orange sunset, or pick from the the newest seasonal releases on tap. Or do what the locals do and enjoy a Stockman’s Lager with a meat pie (made with Pioneer’s own beer) – after all, these are the people who have been drinking at Pioneer since the day it opened with the simple social media announcement: “The roller door is up.”

The only thing you can’t do at Pioneer’s taproom is be ignored.

“You can’t just come and get a tasting paddle here and just go and hide in the corner! We offer an experience, we love engaging and understanding where people have come from, how they heard of us… it’s really an interactive experience."

That interaction extends to between customers as well. There’s usually a healthy mix of people intermingling at Pioneer: visitors who have driven from Sydney for the weekend; food tourists from further afield; farmers knocking off after a long day in the sun. But they’ve all got one thing in common, and that’s an appreciation for beer made from the ground up.

Whether you’re interested in family-owned, locally farmed, sustainably made, or just want some fresh beer to throw back after a hard day’s work… head into Pioneer.

The roller door is up.

Pioneer Brewing is a new farm-based brewery in rural New South Wales. It uses its own grain in its beers and has started growing hops with the intention of using as much of its homegrown crops in the brewing process.

There's never a good time to break your leg, but during a global pandemic while running a regional business is most definitely not good. Yet, with a little help from their friends at Lallemand, Pioneer Brewing turned it into an opportunity. 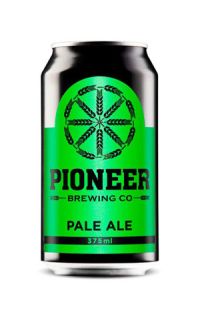 From the inviting hop aroma to the warm greeting of the first sip, this pale ale captures the essence of a welcoming bar with a friendly bartender. “Hi there. Fancy a beer? Take a seat. I'll bring one right out.” So you pull up a piney bar stool, smiling at the quaintness of the fruity pattern on the cushion, and are pleasantly surprised by how comfortable it is. A clear sky – not a cloud, not a bird, not a blemish – has you staring out the window, and you know your face must be a picture… Read more
Golden 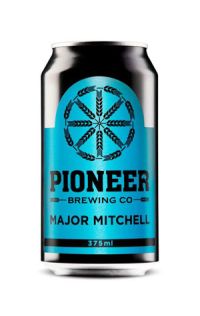 I spent an inordinate amount of time googling European pastries and biscuits while writing about this beer. It began when my drinking buddy described the malty aroma as being "like a stroopwafel". I didn’t know what a stroopwafel was. I now know what a stroopwafel is. I also know about pizzelle, poffertjes, speculaas, oliebollen, and krumkake. But that’s just a delicious tangent. Because while this IPA begins with a sniff of stroopwafel, it doesn’t end there. Major Mitchell’s cockatoo… Read more
Golden 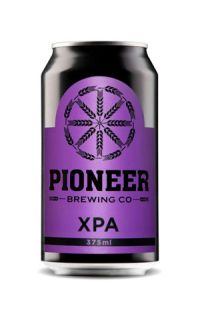 If you’ve ever wondered what the "X" in "XPA" stands for, Pioneer translate their own interpretation of the style for you: “Xtra flavour… Xtra hops.” This beer begins with a balancing malt presence; perhaps it’s the power of suggestion, since the brewery (aptly) describes this beer as looking like honey, but there’s a lovely honey sweetness hovering over the surface of this XPA. But rather than dominating, this sets the scene for the hops, which bring berry and light… Read more
Rich Brown 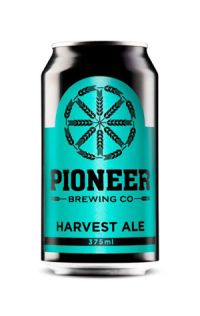 From a brewery that focuses on approachability and drinkability in its beers, one might expect a mid-strength to be the mildest of the range. But this Harvest Ale punches above its weight, beginning with the deep orange colour of an apricot or glowing ember rather than a pale yellow. It’s light and refreshing – as you want in a mid-strength – but is still generous in flavour, from when it touches your lips through to the aftertaste. The hops and yeast come together to offer up overripe pineapple,… Read more
Golden 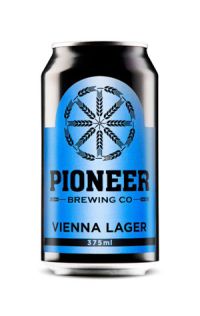 Many Aussies seem to be afraid of malt-forward beers. Between drinkers who’ll touch nothing but pale lagers and hopheads who put every beer on a linear scale based on how much lupulin it contains, there seems to be a chasm where malty beers should comfortably sit. Of course, the law of supply and demand says that brewers aren’t likely to pump out styles that there’s little market for. But since Pete at Pioneer grows his own malting grains, he has a special understanding and love for the ingredient,… Read more
Rich Brown 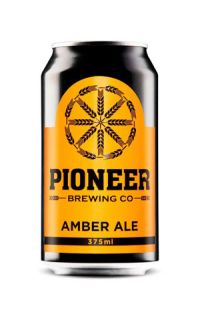 An amber ale that drinks like a session barleywine? Yes, please. While it obviously doesn’t have the intense punch of a barleywine, this amber ale carries that same sweet and sophisticated richness. If you've ever had the pleasure of smelling toffee malt – grabbing a handful before it goes into the mash tun or, even better, sticking your face into the opening of the malt sack and breathing in – then this beer will take you right back there. It’s sticky date pudding sauce. It’s a brandy… Read more
Red 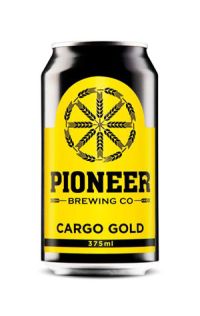 Cargo Gold is the fraternal twin of the Stockman’s Lager. Like the lager, it’s designed to be a simple beer, made for drinking not thinking. The aroma is faint, but as distinct as you’d hope from the burnt orange colour – a smooth toffee that shows off those gorgeous Pioneer-grown malts. There’s a light toffee note in the back of the mouth as well, but when it comes to mouthfeel, there isn’t the stickiness you might have been expecting. While it’s a little thicker in the mouth than… Read more
Golden 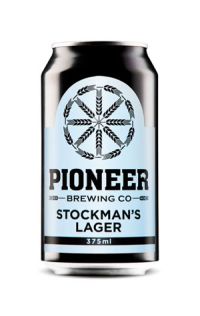 A regional brewery’s lager will always have some serious weight on its shoulders; if you’re going to serve up to people who have been working long hours of manual labour, you’ve got to know you’re giving them liquid relief to their toil. Right from the name, Stockman’s Lager gets that. Seeing it sit in the glass clear as anything is like looking through a yellow dew drop. Inhale deeply and enjoy the smell of a bowl of granola toasted with a little golden syrup, with those same sweet malts… Read more
Golden Yellow 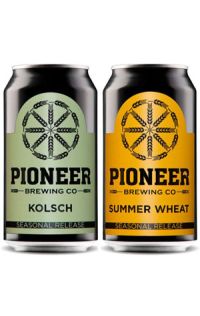 See the liquid sittin’ in the glass now In the evening on a Friday night A little light-a-shinin' through the glass now Lets me know everything's all right. Summer Wheat† makes me feel fine Blowin' through the grain fields in my mind… Kolsch and Summer Wheat are two seasonal releases from Pioneer Brewing that’ll let you know everything’s all right. They’re both a pleasant gold (though the Kolsch is brighter while the Summer Wheat carries a little natural haze); they’re both traditional… Read more
Golden Yellow 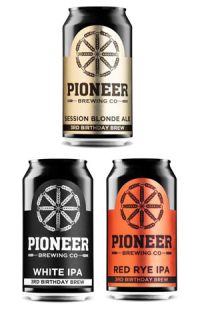 For the month of their third birthday – December 2020 – Pioneer celebrated by releasing a trilogy of beers. The first was a White IPA, as Pete Gerber dipped into a style we don’t see very often. When you take the refreshing nature of a Belgian wheat beer and hop it up to boost the aromatics, you’re bound to get a layered sensory combination. In this case, a misty pastel yellow body gives off the spicy iodine aroma of a peated whisky held at arm’s length, a crisp citrus sweetness, and a… Read more
Golden