There are clear benefits to having an old man who makes award-winning whisky. The ability to sample each release is perhaps the most obvious but, for Tom Bignell, there was another: it offered him a place to brew with an excise licence already in place.

Tom’s old man, Peter Bignell, started Belgrove Distillery on his Kempton farm back in 2008 after a bumper rye crop led him down the path of building his own still and turning his excess grain into whisky.

As a long-time homebrewer, Tom wasn’t quite as keen on whisky as Peter but the space in a back shed did encourage him to turn his long-standing love for brewing into a profession. So, in 2015, he and his wife Carla launched T-Bone Brewing Co, taking its title from a high school nickname of Tom’s, at Belgrove Distillery’s Kempton home.

When the brewery first launched, Tom and Carla initially focused on getting the T-Bone name – and, of course, its kegs – across the wider state, but the plan was always to give the brewery its own space. And, with the couple living in Hobart, the idea was to ensure the next stage of T-Bone took shape closer to home.

That happened when they found an ideal location in an abandoned fishmonger’s in Elizabeth Street in North Hobart and, with Carla's brother Aaron now on board, set about turning it into brewpub. With Elizabeth Street also home to Shambles Brewery, Boodle Beasley and The Winston, it can comfortably claim to be the best strip in Hobart for anyone on a hunt for good beer.

On T-Bone’s corner, all twelve taps pour beers brewed just a couple of metres away. At any given time, they'll be filled with the core range Easy Ale, Pale Ale, Golden Ale, Fruit Bowl IPA and Choc-Milk Stout plus a mix of limited releases. Being based in Tasmania, those limited run beers tend to make use of either the hops or fruit grown down the road and, with a ready supply of whisky laced oak, there’s plenty of barrel ageing going on too.

As a small brewpub, most of the T-Bone beers are sold right next to where they are brewed – often poured straight from one of four brite tanks. But some make it further afield, whether as kegs hitting taps at other Tassie venues or thanks to a canning machine that allows Tom’s beers to find fridge space in some of Hobart’s craftier bottleshops as well as further north.

The beers may well be the only in Australia brewed thanks to food waste too. Carla’s brother owns Flippers, one of the fish and chipperies that are a permanent fixture on Hobart’s Franklin Wharf, and, using an idea swiped from his old man, Tom uses old cooking oil to create enough steam energy to power the brewery.

The bar itself opens Wednesday through to Sunday, when you’ll find locals filing in to have their growlers filled, pick up some T-Bone tinnies, or wile their time away at the bar. As they do, a steady stream of charcuterie boards and small eats are shared although, with no kitchen, those settling in for a session can take advantage of BYO food from the myriad takeaway spots that surround the venue.

On Friday nights, local musicians take to the stage or, rather, brew floor by the stainless, sending their tunes floating out into Elizabeth Street, often accompanied by the aromas of the next batch of beer taking shape. Given it’s amid Hobart’s craftiest strip, it’s a combination that feels just right.

T-Bone built their brewpub largely to focus on keg beer but the success of their cans has seen them struggle to meet demand. That's set to change in the near future, however, with work underway on a new production facility. Craft breweries may have spent years avoiding brewing mid-strength options but, increasingly, they're recognising lower alcohol needn't mean compromising on flavour and learning more about the ingredients and techniques that can pack plenty into a small package. That's been the aim with T-Bone’s Easy Ale, which showcases plenty of hops and malt flavours while keeping the ABV to 3.5 percent. On the hop front, it's mostly melon and citrus, malt wise, it's biscuit flavours leading the way. Will… Read more
Golden What makes a pale ale in the modern brewing world? It’s a style that seems to be able to run the gamut of alcohol content, can swing from lean and hop forward to sweeter and fuller and, visually speaking, can rock up anywhere between a pale yellow and a dark copper colour. For T-Bone, the brewery seems to have aimed to land its pale straight in classic American territory by brewing a beer that’s decidedly malty, with some biscuit and slight caramel flavours sitting alongside piney, earthy hops. Will… Read more
Golden 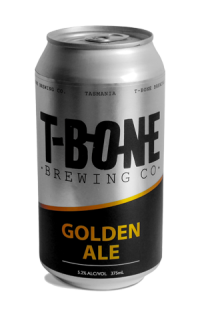 Golden ales were once pretty much ubiquitous in the local beer world, yet with many an exercise in keeping malt and hop characters to a minimum, they were at times easy to deride for their proximity to more mainstream offerings. These days, as crafty palates have gone seeking bolder flavours, pales – maybe even IPAs – are where more brewers are looking, yet there’s much to like about in a beer designed to bring new drinkers into the craftier fold. One such beer is T-Bone’s Golden Ale that… Read more
Golden Yellow Among T-Bone’s biggest sellers is the Choc-Milk Stout and, when you brew in the only capital city in Australia where you are likely to see snow fall, having a dark beer as a top seller is a good thing. The milk stout is brewed with chocolate nibs and vanilla and tastes about as close as beer can get to what would happen if you shoved a block of chocolate in a blender. Against those adjunct and malt flavours, the hops contribute a woody earthiness in a beer that’s particularly lush for one registering… Read more
Black While there’s plenty of IPAs in the world of beer that are loaded with fruit, T-Bone’s Fruit Bowl is instead named after the platter of fruits served up by the hops added at various stages – late and dry-hopping – throughout the brewing process. When you use a combination of Chinook, Cascade, Centennial, Simcoe and Amarillo, it’s little surprise it delivers the punch it does. Keeping the malt body restrained, it’s a beer in which flavours scurry between one another, from Starburst lollies… Read more
Golden Yellow T-Bone have welcomed spring to Hobart with the return of a couple of seasonal faves. For some reason Brekkie Juice hasn't made it onto the pages of Crafty before, but better late than never for the IPA that may well be my favourite to date of those of theirs I've sampled. Brekkie juice is a descriptor often used for hazy IPAs, typically when they appear as heavy in the glass as such a drink, but T-Bone's is more hazy than heavy and delivers the combination of soft, curd like fruitiness, citrusy sweet… Read more
Rich Brown 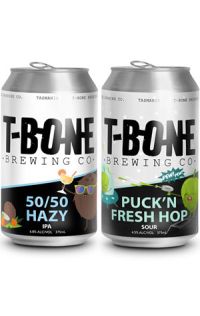 The latest IPA from Hobart's T-Bone Brewing features images of fruit and coconut on the tins and, once decanted into a glass, you might well suspect flesh has been scraped into 50/50 Hazy from the inside of the latter and juice squeezed from the former. It's hazy to the point of pulpy and emits lime and pineapple aromas upfront before that coconut flesh builds on the nose and gradually wends its way into flavour town too. Yet it's all the work of "copious amounts of Mosaic and Sabro" hops,… Read more
Golden Yellow Off the back of another limited release, Bloody Helles, a beer that combined a German lager base with blood orange, T-Bone have turned to another fruit that often finds its way into hop flavour descriptors: the pineapple. Taking a hopped up 8 percent ABV double IPA and layering pineapple juice on top, Pineapple Punch is a beer that, well, you know… packs a punch. With a decent whack of malt sweetness and a big bitterness too, it’s a little like the maltier IPAs that were easier to find in days… Read more
Golden If the name and can design didn't give it away, it doesn't take long for T-Bone's latest fruity number to reveal itself. No sooner had liquid hit glass a foot away than sweet blood orange aromas were burrowing their way up nostrils like excited rabbits. The fruit addition lends Bloody Helles an Irn Bru-esque appearance, while the lightness of the helles lager style base beer allows the fruit to dominate on the palate too in a crystalline, almost cordial like manner, as opposed to anything approaching… Read more
Dark Brown Just like any contemporary brewpub keen to explore, the T-Bone brewers have been firing off shots in many a direction as autumn heads into spring, with this pair of releases about as far from each other as you could imagine. Rye IIPA is, as you'd expect, high in rye malt content and at imperial levels when it comes to booze. And, while they've double dry-hopped with Centennial, Citra and Simcoe hops, it's the ingredient that dominates proceedings. Pouring a deep, rusty hue, it's more a showcase for… Read more
Red You wait years for a chocolaty peanut butter beer to come your way then, whaddya know, two land on your doorstep in two weeks... Following hot on the heels of Barossa Valley's Peanut Butter Chocolate Milkshake comes this porter-with-a-twist from Hobart's T-Bone. And, such was the response to its launch, a second batch was already being brewed by the time the first reached Crafty Towers. Like its SA companion, the beer leaves you in no doubt it's a nutty one. If anything, the crushed nuts aroma –… Read more
Black 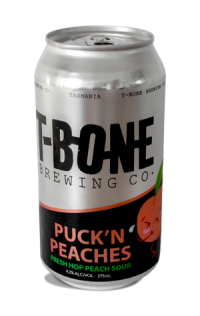 Originally debuting at the Fresh Hop Festival in Launceston, Puck ‘N Peaches makes full use of fresh local peaches and fresh, wet Galaxy hops being available at the same time. The kettle-soured Berliner weisse matches some of Galaxy’s tropical flavours with fresh juice, creating a beer in which the tartness is kept in check, sitting against what comes across as tickly peach and passionfruit juice. … Read more
Pale Yellow