The Colonial Brewing story is one that can be neatly viewed in two parts – parts that are equally neatly centred on each coast of Australia. Part one began in the West, way back in 2004 when "craft beer" wasn't even a phrase used by those brewing it, while part two has at its heart this brewery and venue in Port Melbourne.

Starting at the beginning, it was in 2004 that Colonial Brewing opened its sleek brewpub in the heart of the Margaret River region. Many have since joined them in the region in which Bootleg first led the way, yet few come close to the Colonial brewpub's ambitious scope.

If you're someone who appreciates good beer, you'll likely have called in when touring the region. Yet, aside from tucking into their typically traditionally minded ales at the Margaret River base, you'd have struggled to find Colonial beers anywhere else unless you stumbled across one of a dozen or so venues in Melbourne, Perth or, most recently, Sydney with their beers on tap.

This part of the story began in earnest in 2016 after Colonial took over what had previously been Matilda Bay's brewery in Port Melbourne, walking into a ready made brewery that would allow them to instantly increase production capacity significantly while also having a base to get beer fresher to the East Coast.

The brewery had already installed a canning line at its Margaret River home and started sending Draught (formerly Kolsch) and Small Ale into the world; with this second facility up and running, Colonial tap heads began appearing with greater frequency across the East Coast too. Since taking over the eye-catching old warehouse, new tanks have been added alongside a much larger and faster canning line meaning, well, meaning more of everything beer wise.

They were able to launch their new core range, adding IPA and Pale Ale – both in tinnies with the 360 degree lid they first introduced with Small Ale – and cold pressed Apple Cider Bertie, named with a nod to the Bertie Beetle lollies once made under the same roof. Augmenting the lineup are regular one-offs – often festival or brewery exclusives or collabs with the likes of Padre Coffee and Starward Whisky, the annual Inquests (always 10 percent-plus and dark) and One Keg Wonders that allow the brewers to let their imaginations run wild.

The brewery in Port Melbourne comes in three parts: a space filled with old sofas sat underneath classic photos of AC/DC, 70s boozers and holidaymakers at the beach; one filled with benches and tables alongside a cinema screen of sorts; and the area around the bar looking into the working brewery.

Usually, the bar and kitchen are open from Thursday to Sunday although, with a capacity of 400 and plenty of space for entertainment, it regularly hosts events and functions too. For those that call in, the view of the beamed ceilings, rows of tanks and stacks of tinnies is rather different to the farmland surrounding Colonial's original home. But, as the brewery accelerates its plans to become one of Australia's major craft players, it's this venue that will be its engine room.

Indeed, it's an engine set to boast some serious firepower. Late in 2018, they embarked on a project that will see the installation of a custom-designed, four vessel, 50 hectolitre BrauKon brewery from Germany and a collection of 100 and 200 hectolitre fermentation tanks. With more capacity being added in WA too, the aim is to move to four and then six million litres per annum, continuing Colonial's evolution from Margs brewpub to one of the country's largest independent operators. Colonial’s seasonal release program gives the brewers a chance to play around with local and fresh ingredients plus whatever happens to be on trend. In South West Sour’s case, the Indian summer gave the Margaret River team a chance to cast a gaze over the refreshing Berliner weisse style. The intent was to create one that celebrates a style for season rather than being clinically true to style. In this sense the 4.6 percent ABV and Bertie Cider like can sit well within the Colonial range and… Read more
Pale Yellow In 2014, Colonial Brewing decided to pop beer inside a can in the shape of their Kolsch rebranded as the somewhat logic-bending Draught Ale. A fine drop it is too, one that deserves to find a home in Eskies across the country whenever the warm weather hits. They followed it up with a second canned beer. But this one comes with a twist. Or is that a spin? Or a 360 degree turn? You see, not content with merely popping their Small Ale (a 3.5 percent ABV citrus hopped mid-strength that takes its name… Read more
Pale Yellow 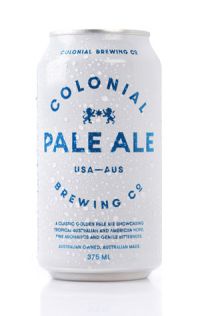 Head back in time and the Pale Ale you'd have found pouring at Colonials' WA home was one that confounded trends within the state, whereby brewers favoured Little Creatures inspired American pale ales. Theirs was inspired by traditional German altbiers – earthier and more malt driven. These days, there's a new Pale Ale in town and it's one that's become part of the brewery's canned core range. The contemporary Pale Ale features a mix of Aussie and American hops, although in a combination that's… Read more
Golden Colonial's flagship started out with the name Kolsch as it took its inspiration from the German beers from the Cologne region. Long before many other craft breweries looked to add an approachable beery beer to their lineup, this was that sort of beer, the kind anyone from a mainstream lager drinker to a beer geek wanting something refreshing to quaff could agree upon. It went on to become the first Colonial beer to be canned too, transitioning from Kolsch to Draught as it did so. The beer inside… Read more
Pale Yellow 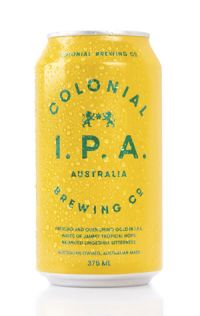 There are breweries out there well known for releasing a broad range of IPAs. Yet, over the years, Colonial Brewing Co has released a cavalcade of its own, many under the IPA on Tour banner. Yet they've tended to be draught only, snuck into a few venues without much fanfare. One variant has stuck around, however: an all Australian one that became part of their regular canned lineup when they fired up the canning line in Port Melbourne. All Australian means all Aussie hops atop an Australian malt… Read more
Golden 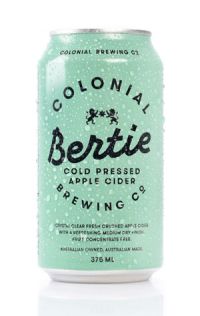 Brewer's notes: Bertie. Weird name for a cider, right? But when you're walking in the footsteps of an Australian icon, you've got to embrace it. The home of our cold press cider is in Bertie Street Melbourne, in the very same building that once produced that staple of showbags across Australia, the Bertie Beetle chocolate treat. Those are some tiny shoes to fill. But our Bertie does it with ease. It's why we use only Victorian apples, which are hand-picked and cold-pressed to create a crisp, delicious… Read more
Pale Yellow When is an imperial porter not an imperial porter? When it’s a Frankenporter, at least according to Colonial's cross-continental brewing team, which took the opportunity during Good Beer Week to get together – a catch-up that proved a little Mary Shelley-esque. Building on Inquest 2017’s success, Colonial’s 14 brewers workshopped the concept for a beer that was rich, dark, strong and above 10 percent ABV. The result? A blend of three versions of imperial porter that were then blended with… Read more
Black

And other good retailers nationwide Judged by their core range, you could assume Colonial Brewing Co, the operation that started out in Margaret River more than a decade ago and now brews out of Port Melbourne too, is a brewery interested only in delivering tight, approachable beers and cider. Yet take a look through the catalogue of one-offs – usually tagged Project beers – and, as well as finding rather a lot named Gary, you'll see they're not afraid to throw off the shackles: truffle beers, a long lineup of globe-trotting IPAs… Read more
Black