Located on the banks of the Tumut River, with picturesque views over clear waterways, mountains and bushland, there are plenty of reasons why the town of Tumut could easily be a prime spot for anyone keen on a getaway in the Snowy Mountains region.

Yet, due to its long history as a timber mill town, Tumut never quite enjoyed the tag of tourist destination, despite its abundance of natural beauty just a couple of hours from Canberra.

It was a desire to showcase the town that in part led Tim Martin and Simon Rossato to launch Tumut River Brewing Co in 2013 following an inspirational trip to visit the Dalgety Brewing Co. The former quit his job at the local paper as the pair set about clearing the regulatory hurdles, getting their hands on a wholesale licence a little over 12 months later and launching their first beers at the Royal Hotel in July 2014.

On the outskirts of town, they converted an old tyre shed into a brewery, driven by the idea that good beer, good food and a good place to enjoy both would soon enough start bringing people to town. While it wouldn't open to the public until that summer, they began offering growler fills and got their locals on board from the off, inviting them to help christen the beers that would take names such as Blowering Blonde, Redneck Ale and Ginja Ninja.

Soon enough, it was an idea that proved worthwhile. Sure, locals took to the notion of being able to enjoy their fresh beer at their own brewery but many from further afield began stopping in too. Whether it was those who wanted to escape Canberra for a day, or people keen to spend the weekend exploring the Snowy Mountains, Tumut River Brewing Co soon became the sort of spot you would schedule into your trip.

Tim and Simon didn't just wait for the people to come to them, either. They hit the road with a mobile bar, becoming regulars at the region's festivals. Wasting little time, within a year of releasing their first beer, they'd embarked upon a crowdfunding campaign that enabled them to buy Cavalier's bottling line, invited their fans to help with the design of six-pack holders and were soon brewing and packaging nine beers.

It's a story that's continued on an upward curve since. In late 2016, they added an eight-tap caravan to their on-road fleet and upped their commitment to festivals and events and, while plans to move to a larger site fell through, they were instead able to expand operations on their existing site. The Tumut River team took delivery of a new brewery in March 2017, one that not only allowed them to increase production but also help other small, independent operations get beer to market, including Barellan Beer and Borambola Wines' Tuckerbox Lager.

Arguably the biggest step since launching, however, came in October of that year when their licence was upgraded. It allowed them to install a 24-tap system and build a kitchen, meaning that any time you call in (and they're open seven days a week) you'll be able to choose from a mix of TRBC beers – brewed with locally grown and kilned Voyager malt – plus beers and ciders from other producers in the region. Not that it's slowed their commitment to hitting the road: on the day the expanded brewery and taphouse was opened in May 2018, Tim was pouring beers from the caravan at Batlow Ciderfest...

Add in pizzas made with local ingredients, house-roasted coffee and regular live music that can flit from jazz to punk and it makes the brewery the kind of local operation that helps showcase the region while offering newcomers an extra reason to visit in the first place.

Sure, natural beauty is one thing, but enjoying a fresh pale off tap or taking home a six-pack of recently bottled beer has a beauty all of its own.

Pubs and breweries across the country have been switching to home delivery as a means of #keepinglocalalive. But few are clocking up the kilometres – or doing it with the panache – of Tumut River Brewing Co. Less a new release than a tweak and a new name for the beer formerly known as Aussie Ale, Your Shout – now an Easy Ale – still makes use of malt from Voyager Craft Malt in the Riverina and hops grown locally in the Snowy Mountains. And it still reminds me more of the UK than anything Aussie. Arguably its standout feature is its appearance, with those Voyager malts giving it a beautiful deep amber colour. That said, they also contribute heavily to its traditional ESB like character, producing… Read more
Rich Brown The Ginja Ninja is Tumut River's biggest seller: a ginger beer brewed with apple juice. It starts out with the brewers collecting 1,000 litre of fresh juice from a local orchard, before the ginger is added at the brewery. There's heaps of prickly ginger on the nose, plenty of sticky sweetness, some herbal characters and a little back palate heat in there too. For all that – and its 5.3 percent ABV – it could just as easily pass for a soft drink.… Read more
Pale Yellow Brewer's notes: Like most porters this beer is about the malt. You’ll get strong dark malt flavours including roasty, toasty and even hints of coffee. Unlike most porters you’ll get a smell and taste of smoked cherrywood; smooth and subtle and a thinner, lighter finish making it easy to drink and great around the campfire.… Read more
Dark Brown While many Aussie brewers have been moving into ever paler territory with their pale ales, the Tumut River offering is more akin to the American pale ales of yore. It's as much a showcase for malts from small NSW producer Voyager as it is the American hops. Full Grunt sits at the darker end of the style spectrum, with toasted malt, dark caramel and even hints of chocolate at play alongside the floral and citrusy hop aromas, underpinned by an earthy bitterness.… Read more
Golden Brewer's notes: Our J.W. Pilsner is a traditional Czech Pilsner that focuses on voyager Pilsner malt and finishes with a nice biscuit note. Using only traditional Saaz hops, this beer is fresh, crisp and clean. … Read more
Pale Yellow Hitchhikers Guide To Galaxy is designed as a showcase of the most popular of the new wave of Aussie hops, coming with a far lighter malt bill than the Squealing Pig APA as well as a lower alcohol content, putting it into session ale territory. The Galaxy fires off lively limey, citrusy aromas while delivering a touch of resinous character on the palate, but with a bitterness that, particularly compared to the other Tumut River pale, is restrained.… Read more
Golden Yellow If you were to pick up a can of Tumut River's Bounty Hunter and have your eyes alight on the words below the logo – "DARK ALE" – you may well be in for a surprise. The real clue is in the name at the top. Sure, it is a dark ale, but it's got rather more than a dark brown hue and chocolaty, toasty malts in wait for you. It's their Bounty chocolate bar-inspired release, one that first appeared in 2019 and has been requested by many since. It comes with desiccated coconut flavours and… Read more
Dark Brown As word came through that New South Wales was closing its borders to Victorians (leading to an earlier-than-planned dash south from Broken Hill) and that Melbourne was going back into lockdown, the name of this beer has taken on even greater personal significance. Already a nod to the wild ride that is 2020, the prospect of being cooped up for another six weeks has led to discussions around just how long we could survive on solar power, cold showers and occasional runs to the nearest town to stock… Read more
Golden Yellow Deliverance is a red IPA the team at Tumut River Brewing like to brew a few times a year; a fact that suggests a boat trip down the Tumut River may well be akin to taking a canoe down the Cahulawassee. What is clear, however, is the heady mix of tropical fruit – papaya, melon and mango – the beer serves up against its sweet malt body. Sitting at 8 percent ABV, there’s a warming booziness in there too, while a round 100 IBU count tells you this isn't for the faint-hearted. Just like a trip down… Read more
Red

Deliverance is a red IPA the team at Tumut River Brewing like to brew a few times a year; a fact that suggests a boat trip down the Tumut River may well be akin to taking a canoe down the Cahulawassee. What is clear, however, is the heady mix of tropical fruit – papaya, melon and mango – the beer serves up against its sweet malt body. Sitting at 8 percent ABV, there’s a warming booziness in there too, while a round 100 IBU count tells you this isn't for the faint-hearted. Just like a trip down… Read more
Red 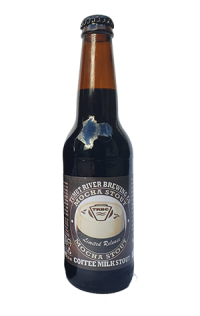 For winter 2019, Tumut River showcased both local malts and locally-roasted coffee in Mocha Stout. Like many Tumut beers, makes use of Voyager malt, with house-roasted coffee beans and lactose completing the picture. There’s a rich, cherry-like coffee flavour that comes through first before it’s joined by roasted notes, chocolate and a sweet and smooth finish. Will Ziebell… Read more
Red 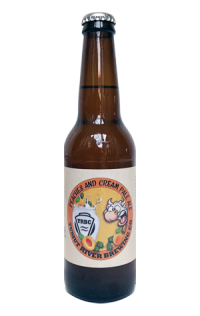 This seasonal from Tumut River might bear the tag "pale ale" and, indeed, it does present pale and there are some hops in the mix, but in essence the beer side of things (in the traditional sense, at least) is merely there as a launchpad for the stars of the show: peaches and cream (well, lactose). Put the glass to your nose and you'd swear you were about to take a swig of freshly squeezed peach juice, while the lactose adds a little creamy sweetness without taking away from the peaches.… Read more
Pale Yellow Maybe it's the association in the name, but if anyone who's eaten a Bounty chocolate bar is able to tuck into Tumut River's chocolate coconut porter and not imagine they're consuming one in liquid form, I doff my cap. Aromas of desiccated coconut are dominant, coming wrapped up in chocolate (and with a cola like layer in the mix too). Once it hits your palate, however, you might be surprised to find it's not as full-bodied or creamy as those aromas would have you expect. Indeed, it's relatively lean… Read more
Dark Brown As the name suggests, Tumut River's Aussie Ale is the one designed as their BBQ beer, their “gateway drug” to craft beer. As with all their brews, it's made with all local Voyager craft malts, which lend the beer its dark copper colour as well as a sweetness reminiscent of English ales. Bitterness is kept low with some fruity esters completing the picture.… Read more
Golden Yellow Tumut River Brewing’s Bad Mofo was inspired by the big and bad beers of America’s West Coast. Originally, it was brewed for the Melbourne band The Tarantinos when they headed up to Tumut for a gig but it proved popular enough that it’s now released at least a few times a year. Like many of the brewery’s beer, the malt base is mostly from Voyager Craft Malt in the Riverina region of NSW, with Munich playing the lead role with some locally-grown rye included too. With a mix of Mosaic and El… Read more
Golden