If the name wasn’t enough of a giveaway, it’s not long after walking into Future Mountain brewing and blending that you get the sense of just how important barrels are to the brewery’s story. They line walls and envelop tables while barrel hoops hang down from the old warehouse’s roof like beery chandeliers.

Even before they opened the doors to their Reservoir home, Shane Ferguson and Ian Jones were well versed in brewing, having worked at several other local breweries over the past few years.

They opened their own venture in March 2019, another moment that helped showed just how diverse the local beer scene is becoming in Australia. Future Mountain may still be located along the 86 tram line - Melbourne’s most craft beer and brewery rich public transport route – but you hardly need to look deep into the annals of history to consider Reservoir an unlikely spot for an operation like Future Mountain to set down roots.

The diversity of what’s brewed inside flits from Belgian-inspired saisons and traditionally-minded pilsners to the barrel-aged, the barrel-fermented and the blended. They pour from 12 taps lining the walls either side of the island bar and are likely to change with each visit, as new blends, new barrels and new ideas regularly take their turn. What stays constant is that each beer’s name is a musical references; it might be a song name or a lyric – with the Bob Dylan portrait inside hinting at the source of some of Shane and Ian’s musical cues.

While many brewers of such beers have drawn inspiration from the great lambic and farmhouse breweries of Belgium and northern Europe, it’s also America’s growing number of sour and wild beer specialists that have helped drive the creation of Future Mountain. The duo’s focus is on blending the Old World and the New by overlaying historic brewing practices with more contemporary techniques, something reflected in the brewery’s name.

Their lab – the aptly named Culture Club – is filled with a selection of bacteria and cultures they’ve stockpiled from beers they love; Future Mountain’s core culture has been built by Ian over the years at home and can trace its roots back to some of the pair’s favourite breweries, the likes of Cantillon and Jester King.

Like the beers, the plan is for the mixed culture to evolve and include wild yeast strains they’ve captured, including some from the orchards and wineries where they're sourcing their fruit: from the off, Shane and Ian have been working closely with local producers, sourcing raspberries, apricots, redcurrants and more from the Yarra Valley.

The final element of the brewing side of Future Mountain sees their Belgian style beers take shape within an open fermenter located in its own sterile and temperature-controlled chamber – a setup designed to let the yeast really go to work.

The mix of modernity and tradition is maintained throughout the taproom, where an exterior that looks pretty much identical to the surrounding warehouses obscures what lies inside. The front bar is brought to life by low lighting and indoor plants, and provides plenty of space in which to enjoy glass after glass of saison. The back bar feels designed more with the beer geek in mind: the stainless side of the business lines one wall and you can pull up a pew between the barrels as you tuck into one of their mixed ferments.

Until bottles arrive in the second half of 2019, the brewery is the only place to find the beers too, not that you’ll regret the trip. With no kitchen, food comes in the shape of pies and pasties or can be is supplied by nearby businesses. But chances are you’re here for the beers and the barrels. Enjoy. A farmhouse ale made in an industrial Melbourne suburb might sound like a contradiction but, if the farmhands of Belgian were drinking anything like Force of Nature, we’d wager they wouldn’t mind. Indeed, if this is what they were drinking in Belgian farms more than a century ago, it sounds far more appealing than the life of someone on an Australian farm work visa. Built upon a mixture of cultures cobbled together in Future Mountain’s lab, any fans of Brettanomyces-laced saisons will likely… Read more
Golden Yellow

Ordering Force Of Nature and Wonders Of Nature from Future Mountain brewing and blending is as fine a lesson as to what barrel-ageing can do to beer as you could want. The former is a Brett farmhouse ale, while the latter features the same mix of cultures as the its saison-inspired sibling, with a slightly tweaked malt base, and is fermented in barrels. In Wonders Of Nature, the funkier side of that culture is more at play, with an acidity playing off the beer's oaky vanilla flavours. The beer also… Read more
Golden Yellow 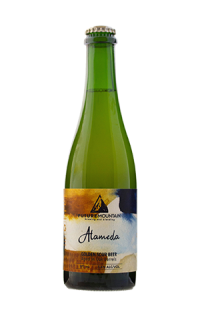 An ever-changing beast, Alameda is Future Mountain’s barrel-aged golden blend, with each release showcasing a unique mix of yeast and bacteria. While it might change every time you walk into the brewery, it’s likely a beer that helps encapsulate what Future Mountain is doing better than any other: a project that is set to continually evolve over time. From the apricot-heavy offering that was pouring the first time The Crafty Pint came in, to the more wine-like and funky, the nectarine and the… Read more
Golden Many of us, when we were kids, were constantly berated by our parents: “Don’t play with your food!” or “Stop putting things in your drink!” Apparently the brewers at Grifter were never discouraged from doing this. Or maybe they were, but their rebellious natures just proved too strong. Either way, the Grifter crew have got a couple more offerings that are the result of experimenting with putting things in their drink. Hand in Hand is about as Aussie as it gets - a pale lager, that classic… Read more
Red 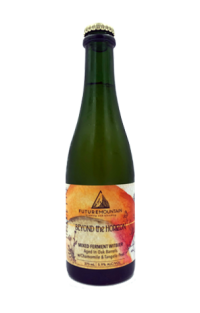 Future Mountain Beyond The Horizon

If you've visited Future Mountain's brewery venue in Reservoir, you probably noticed the room behind a glass door called Culture Club. Aside from being another of the very many musical references that permeate all things Future Mountain, it's home to their growing bank of mixed cultures. At time of writing this numbered more than half a dozen, to which they've been assigning names and which they like to use within certain beer styles. In the case of Beyond The Horizon, it's Roslyn – named after… Read more
Golden Yellow Future Mountain only launched earlier this year but already they've shown themselves to be an essential local for anyone in Reservoir with even a passing interest in beer and a brewery to watch for fans of delicate but complex barrel-aged beers. These two releases from the brewery might have different occasions in mind but both show the team’s ability to meld detail and drinkability together in one bottle. Let The Day Begin is something of a weekend brunch beer: a golden sour infused with coffee… Read more
Golden

Both beers are launching at the brewery on the weekend of Nov 29 to Dec 1. On Sunday, Future Mountain and Everyday Coffee will be pouring the beer at their respective homes, along with bacon and egg rolls at the Collingwood café and pastries at the Reservoir taproom. Future Mountain’s take on a classic Belgian witbier, Harrow & Harvest is made with malted, rolled and raw wheat plus orange peel and coriander seeds. The last of those ingredients was sourced from the Indian supermarket a few shops down the brewery’s home in Reservoir in keeping with their ethos, of course. Though it's clearer than the typical haze found in Belgium’s wits, you’ll find flavours familiar from those originals: a mix of sweet orange and coriander, yeast-derived clove, some… Read more
Pale Yellow The first saisons might have been found in the fields of Belgium and Northern France but when they’re made with a lower ABV – which few modern ones are – there’s no limit to where, when or how they should be enjoyed. Well carbonated, light on the palate and unlikely to lead to a nap post-consumption, it’s a beer ready to match with almost any meal at almost any time of the day. That’s certainly the case with Future Mountain’s Incantation, a sprightly-carbonated table beer that sits… Read more
Pale Yellow Beginning its life as golden ale, after six months in barrels Series of Dreams was transferred to spend a further two months on fresh raspberries from the Yarra Valley. The beer spent those two months refermenting away and extracting a lot from those berries, as its vibrant, bright red colour can attest to. It plucked out a whole lot of flavour too, packing a hefty punch of raspberries with a jammy quality that matches against the beer’s tart acidity. Will ZIebell… Read more
Red Even before they opened the doors to their Reservoir brewery, Future Mountain’s Ian and Shane were busy working with local farmers to get their hands on seasonal fruits for their beers. They were keen to brew for the seasons, finding the right fruit when it was ready and thus bringing beer and its agricultural roots together. They’re not quick to waste any of that bounty either, as Memoria is a testament to using apricots that had already had one beer flow through them. The first was Two Wheeled… Read more
Pale Yellow A Million Stars was designed during the depths of winter and is a farmhouse beer that even the brightest stars wouldn't shine through. Made with a bouquet of cardamon, black pepper, rosemary, star anise and juniper plus the French hop Aramis, which contributes further spice and some pine. Flavours of lavender and bergamot also come to the fore alongside its roasted, savoury malts and, while it might pour the deepest of browns, it’s dry and slightly light body makes you think it could just as easily… Read more
Dark Brown 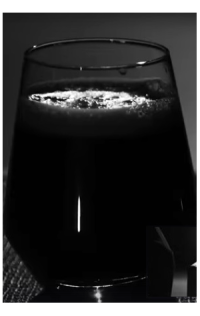 A silhouette might typically be thought of as a simple two-dimensional imprint of a far more complex world, but that charge can’t be levelled against Future Mountain’s beer of the same name. Instead, the bourbon barrel-aged imperial oatmeal stout is a deeply complex affair, one in which underlying flavours keep slowly rising to the top and making themselves known. Instead of being a cardboard cut-out, it’s an incredibly smooth and velvety beer, pouring thick and abyss-like. To start with there’s… Read more
Black

Launching at the brewery on July 6

Their first winter since opening isn’t even close to being over and already Shane Ferguson and Ian Jones are keen to treat drinkers to an impressively diverse mix of dark beers. One of them, Radio Kaliningrad, is a beer inspired by Prague’s U Fleku, which solely brews a single dark lager; in homage, this lower ABV Baltic porter has been designated a Czech porter. It’s one with plenty of flavour on the dark malt front too, with espresso, chocolate and raisins all tied together before the clean… Read more
Dark Brown

Barrels and blending might be Future Mountain’s reason for existing, but wander into the Reservoir brewery and you’ll always find a pilsner pouring alongside the fruited and the funky. Soul Jacker is one such example, a pilsner made with rye and the relatively obscure German hop Saphir. With a nigh on amber hue, it's a beer that pours so bright and clear you can easily understand why such beers became so popular once drinkers were able to enjoy them from glassware. Soul Jacker delivers a decently… Read more
Golden