Atomic is a name that will be familiar to many in the local beer world – and with good reason. An American style pale ale bearing that name was debuted by Gage Roads so long ago in craft beer years it predates almost the entire modern day industry in Australia. And, like the Australian beer world that surrounds it, it’s come a long way since.

In fact, it’s fair to say Atomic had already come further than most as its tenth anniversary approached. Sure, there had been a reworking of the recipe as part of a wider evolution of the Gage Roads lineup in late 2014, but it’s the middle of 2019 that will be regarded as ground zero as it evolves from a single beer into a whole new brewing company, Atomic Beer Project.

Starting with the beer – sorry, beers – first. The Pale Ale remains but has been given a bold new look and is now the starting point from which the Atomic team have been given license to take its DNA – hop forward yet balanced – and expand upon it to create an entire range.

The first stablemate to appear as a permanent fixture was an IPA in cans and on tap, picking up an AIBA gold straight off the bat. The launch of the new brand was also celebrated with a limited release IIPA in tallboy tinnies. Looking ahead, expect more beers in which brewers explore the ever-diversifying world of hops, both up and down the alcohol scale and in various styles too.

In essence, by creating Atomic Beer Project as a standalone brand, it frees the team to create beers that wouldn’t sit right within the broad appeal parameters under which Gage Roads operates. That said, just as Gage brands like Single Fin are there to ease drinkers into craftier realms of the beer world, the intention with the offshoot is to demystify hoppier beers for the vast majority of drinkers yet to encounter their first IPA.

Possibly the most exciting part of the project came to life in the second half of 2020, when the WA-based operation built a spiritual home for Atomic Beer Project on the east coast, in the inner-city Sydney suburb of Redfern. It’s ground zero for experimentation and innovation for Atomic, as well as a fun way for people on the east coast to engage with Atomic’s beers.

On Regent St, the schmick brewery and taproom - complete with two tiers of seating, a co-working space, and a 12-metre long hop-green bar top - gives punters a place to slow down and enjoy Atomic beers in their natural habitat. The taps pour Atomic’s core range and limited release beers, including a few experimental brews unique to the venue, straight from the stainless steel tanks behind the bar.

Atomic is all about growing people’s appreciation of the wondrous hop, so the staff take every opportunity to engage drinkers in tours and tastings and impassioned chats. But at the end of the day, most beer education happens in the mouth - the best way to learn is to drink some hop forward beers, pair them with spicy Asian dishes cooked in flaming woks, and have a good time.

From beer to brand to brewery, it’s been quite the opening decade for Atomic. And it feels like the story is really only just beginning.

From trestle tables and pull-up banners to 50s themed diners and entire breweries made of cardboard, brewery stands at beer festivals have come a long way. Mick Wust asks why it's important to stand out.

After months of delays due to COVID-19, Atomic Beer Project's new brewery and venue is ready to open in Redfern. It represents a major East Coast move for the Good Drinks group formed by WA's Gage Roads. The third permanent entry in Atomic Beer Project’s hop exploratory range shows more restraint and approachability than its peers. Indeed, XPA’s breezy pale blue can is indicative of contents that come on more like a lean-bodied summer ale than the beers you'll find at the robust end of the loose XPA style. Hazy sunshine in the glass, Azacca and Vic Secret hops provide tropical touch points, supported by Ekuanot’s light citrus influence, all while keeping bitterness at a lowish 25 IBUs. It's… Read more
Pale Yellow Atomic’s second core range beer – Atomic Pale being the OG upon which this new brand is being built – showcases the approachably modern end of the ever-expanding IPA world. As a large swathe of Australian drinkers gradually make the lupulin shift from pale ales into IPAs, this represents an ideal gateway and is likely to be first IPA that many will try, given Gage Roads' broad audience. Simcoe, Amarillo, Columbus hops provide clean citrus with a passionfruit and pine undercurrent on a minimal… Read more
Pale Yellow 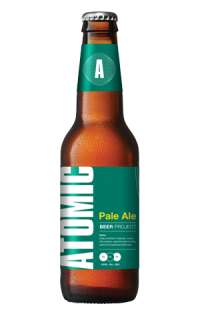 Gage Roads' take on the American Pale Ale style pours the brightest of bright oranges and uses a combination of US hops (Citra, Ahtanum and Centennial) to deliver what you'd expect of such a beer in a polished, approachable manner. There are some delicate citrus and pine aromas and fruity, grassy hop flavours that sit alongside the caramel grain flavours, with a restrained and drying bitterness tying things together. As of mid-2019, the beer is striking out on its own, in a manner, as Gage Roads… Read more
Golden The opening of Atomic Beer Project's Redfern brewery home has been delayed somewhat by the COVID-19 pandemic but the brewers at parent brand Gage Roads' WA home are still at work. And this fruit of their labour is one of two concurrent releases making full use of Cryo hops, the other being Gage Roads' Loop The Lupe, which you can read about here. Red Alert is built around Cryo versions of classic US hops Amarillo and Centennial and is a beer sitting firmly in the red ale rather than red IPA space.… Read more
Red Atomic Brewing Project’s debut limited release is a statement of intent, something which says: "This is a hop focused brewery and, to make sure that you know, we’ve put it in a big can." Moreover, the gridded label design implies serious research and development, conjuring images of checklists and people in coats looking into all things hoppy, a promise on which the liquid inside delivers. IIPA can mean a lot of different things and here the emphasis is on a clean, West Coast IPA-leaning… Read more
Golden