If you’ve ever driven through Camperdown in Sydney’s Inner West, there’s a good chance you’ve spotted the Malt Shovel Brewery at some point. But you may not realise what the Malt Shovel brewers get up to behind the closed doors of that tall brick building.

If you’ve been around for a while, perhaps you know that Brewmaster Chuck Hahn established the Hahn Brewery on that site in 1988; it was Australia’s largest microbrewery at the time. Perhaps you know he later entered into a partnership with Lion, and that in 1998 the brewery was renamed the Malt Shovel Brewery.

You might also know this is where Lion first experimented with craft brewing, and that many James Squire beers were first brought to life here; the James Squire branding is still the predominant branding on the brewery’s exterior today. You may even know this brewery expanded in 2008, and that, while Lion brew their higher volume lines out of a number of breweries around the country, the Malt Shovel Brewery still pumps out many of Lion’s craft beer brands.

But you might not be aware of the creative undercurrent at the Malt Shovel Brewery. It began in 2009, with the brewers putting out a few special releases under the Mad Brewers label, and evolved a little further with beers like Interceptor Black IPA and Hoppy Hefe under the Malt Shovel banner. These beers were more adventurous than the James Squire core range, but still played by some of the same rules. But each year saw the brewers push a little further, until in 2019 they broke free, and the brewers were given free rein of their own brand: Malt Shovel Brewers.

As soon as you see a Malt Shovel Brewers label, you get there’s something different about it. Take their one and only core range beer: an XPA called “This Is Our XPA”. The recipe was a team effort, and the label reflects that - it depicts the nine brewers who worked together on the XPA as avatars. There’s Haydo, Freshie, Skorch, Viking Rich… they all get credit for the beer, and each team member’s identity becomes part of the brand. Each limited release beer then showcases the avatar of the brewer who conceived of it, and even those of any supporting brewers.

“It’s the only beer brand I’ve seen based on the people making it,” says Haydon Morgan - Haydo - the head brewer at Malt Shovel. “This is our brand. We’re the brewers. We are on the label.”

Some of the limited releases are keg only, making their way to venues around Sydney and guest starring in James Squire venues around Australia. Some of them make it into cans, sold exclusively in Vintage Cellars. All of them are beers the brewers at Malt Shovel want to brew and drink for themselves.

The Malt Shovel Brewery is a mix of old and new, big and small. It’s still a production brewery for other craft lines of Lion. It’s still not accessible to the public, though the Malt Shovel Brewers are hoping to get licensing for one-off events from 2020, as they used to for Sydney Beer Week. It still uses an old copper brewhouse that’s more than half a century old (though the inside has been refurbished with stainless steel).

But the Malt Shovel Brewers are passionate about their craft. Their trusty ol’ brewhouse is far from being all automated, instead requiring a lot of hands-on attention from the brewers. They’ve retrofitted their fermenting tanks to cope with more hops as they’ve kept their recipes evolving to pack more punch. They’ve been members of the Inner West Brewers Association since its inception.

And when it comes to their Malt Shovel Brewers label, they stick to the adage: brewers brew the beer they like to drink, then they sell whatever’s left.

From fermenting pumpkins at home and homebrewing with his brother via Malt Shovel to heading up New Zealand Hops, Doug Donelan has lived his life in beer. We sat down with him as he starts looking forward to retirement. We all know the phrase “American as apple pie”. But do we have an Australian equivalent? With Stu’s Big Galah Aussie IPA, Malt Shovel Brewers seem to be leaning towards “Australian as a big galah”. The IPA is certainly bright and colourful, even if that colour is the golden plumage of a kingfisher rather than the attention-grabbing pink of a galah. How about “Australian as a day at the beach”? While ocean and sand are a distant memory for most of us during lockdown, the head on Stu’s… Read more
Golden Malt Shovel Brewers This Is Our XPA

“This is our go-to beer. The beer we’d happily drink every day.” The ethos behind the Malt Shovel Brewers is experiment, play around, and discover new recipes for beers they’d like to drink - which essentially means “limited releases”. But when the team landed on the recipe for This Is Our XPA, they decided it should stick around. Citra lupulin powder provides the core of the hop character, with Amarillo and El Dorado as supporting characters. The trio brings grapefruit and even a little… Read more
Golden 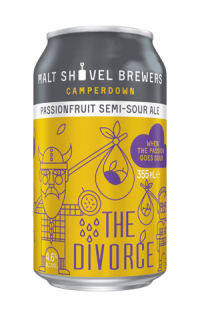 When two of the Malt Shovel brewers (Rich and Haydo, for those following the Malt Shovel Brewers story) worked together on a recipe for a passionfruit sour, they brought a delightful pun to life. The beer was called The Divorce, with the tagline: When the passion goes sour. Chuckle. Of course, dwelling on divorce could bring up bad associations for some, so perhaps we could point out that passionfruit wasn’t named for "passion" in the romantic sense, but "passion" in the religious… Read more
Pale Yellow When Malt Shovel Brewers teamed up with Club Brewing Co to brew a beer, they were inspired by James Squire’s The Chancer Golden Ale - but with the malt and hops turned up a notch. The result is Dave’s Extra Golden Ale, and the name is apt - I’m not sure the gold colour could be any deeper without turning into bullion (or, you know, being described as a different colour). It’s no surprise the decal shows a pot of hops at the end of the rainbow. The magnified malt profile brings a golden syrup… Read more
Golden When you live in a bubble, it’s easy to forget what the world looks (and tastes) like outside the bubble. And in our Aussie beer bubble, we sometimes forget that flavourful but easy-drinking beers don’t have to be hoppy. Malt Shovel Brewer Richard Van Grootel - the viking you see on decal wielding a bent shovel in one hand, and a delicious cone of fries in the other - went travelling through Europe in 2018 and was reminded just how good Belgian blond ales can be. He returned home inspired, but… Read more
Golden 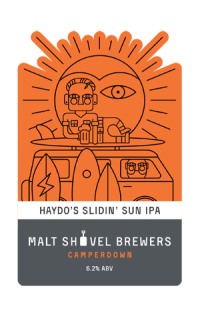 When IPAs first found their way into the Australian beer scene, they were often referred to as the big bitter beers that blow your head off (and of course, they still represent this to some people). But one look at the decal of Haydo’s Slidin’ Sun IPA - Malt Shovel’s head brewer Haydo reclining on top of the surf van while the deep orange sun sinks inexorably toward the horizon - and you get the sense this beer isn’t going to knock you out, but chill you out. It’s beautifully bright, with… Read more
Golden Everyone knows the way to calm a savage beast is to offer it a beer. While you’re up a palm tree. With a cat on your head. Or so the decal of Stu’s Beast Coast IPA suggests. This beer plays in the waters of East Coast IPAs without crossing into sheer juice territory. It carries a fair amount of haze, has a billowy head, and there’s no shortage of hops – Beast Coast is triple dry-hopped, and done in such a way as to encourage biotransformation from the yeast for extra fruity characters –… Read more
Golden Yellow “We used a shitload of lychee in there, but the interesting thing is the lychee isn’t hugely dominant.” When Pete – ahem, I mean Pedro – ran a few test batches of this beer in the pilot kit, the lychee flavour took over. But once they scaled the beer up to a full batch the lychee character backed off, balancing out to a subtle addition on the palate. So, so, this isn’t a lychee bomb. The fruit characters – a little passionfruit on the nose, lemon in the mouth, and lychee in the background… Read more
Pale Yellow In 2015, Wayward Brewing moved into Camperdown – just across the road from the Malt Shovel Brewery. So what’d the Malt Shovel brewers do? They headed over helped them set up the tanks, and the two breweries chatted about how great it’d be to brew a beer together. Well, it took four years, but they finally came together and made Camperdown Collective. It’s a West Coast IPA that remembers the days before the haze craze, drawing its flavours from the classic US hop varieties Cascade, Chinook… Read more
Golden