Sometimes you stumble across a well kept secret and have to grapple with whether you want to showcase it to the world or keep it to yourself.

That's been the case with many businesses tucked away between Melbourne's bustling inner suburbs and the ever-popular tourist spot that is the Mornington Peninsula. And it's no exception for Braeside Brewing in Mordialloc, which has been steadily building a loyal customer base since opening in 2019.

The brewpub in the heart of the beachside suburb's industrial area from which it takes its name has been enjoying positive feedback from locals and visitors, one that's run by a family with roots in the local community.

The converted industrial space might be all about clean, contemporary stylings – within its tall ceiling and concrete and timber walls you'll find tiles lining the backbar, and a sleek, 12-tap font sitting atop a concrete bar they designed themselves – yet the atmosphere is inviting, a legacy of the team's decades of experience in the food and drinks industry. The presence of an eye-catching pizza oven certainly helps on that front too.

Creating a space where guests would immediately feel welcome was a major goal of owner Rame Abdallah. Of course, as a brewpub, it was just as important for the beers to entice people through the doors too.

To complement those best-sellers, the team ensures there are constant changes at the bar; there's a dedicated sour tap and chances are fans of dark beer will find a selection from which to pick. Having spent his career prior to opening Braeside in the liquor industry – in pubs, bottleshops and other roles – variety is prioritised by Rame, and they're happy to take on board requests for future releases from locals and visitors alike.

Having opened their doors just a few months before COVID-19 shut down all venues across Australia – before enduring Melbourne's second lockdown too – they started putting more beer into cans, including more than a dozen limited releases at time of writing. This means there's generally a wide range to take home, as well as a decent chance you'll find Braeside beers in indie bottleshops. Completing the picture on the booze front, all wines and spirits they stock are locally-sourced too.

If you're after a little more than just beer, stone-fired pizza, and a welcoming atmosphere, they host live music on Friday nights and have thrown parties outside the venue too, such as their Picnic In The Park events that bring together local brewers with other food and drinks producers.

Taken together, it's the modern craft beer story writ large (OK, not that large, but you get what we're saying): family-owned, locally-brewed beer, community-minded vibe. Cheers to that. It doesn't take long to understand why Lead Head has become one of Braeside's most popular beers. Sure, there's nothing contemporary cool about it – no haze, no extravagant hops, no high ABV, nothing funky. But it does what a no frills lager should do, and does it very well. Pouring the palest of pales, Aussie grown Super Pride hops contribute an old-fashioned hop dash of floral and faintly citrusy aromas alongside sweet and light cracker malts. Clean, quenching, and sessionable as, all without… Read more
Pale Yellow There's heaps of breweries operating in and close to Melbourne's Bayside area now, which probably explains why Braeside have trademarked the name of their IPA. It also suggests they've got plenty of faith in the beer proving popular enough to stick around. A meeting of brewpub favourites Apollo and Archer in one new beer, its purple label hints at the candied berries and blackcurrant (presumably derived from the Mosaic hops within) that make up part of a modern IPA that also flirts with citrus, melon… Read more
Golden It might be the one with "session" in its title, but there's a little more to get your teeth into here than Braeside's other core range can with sessionability in mind, the Lead Head Lager. Drinkers in the know will likely hazard a guess that Amarillo hops are at play; one sniff of this lightly hazy golden beer and its sherbety citrus aromas are giveaway, while there's a touch of bergamot, pine and an earthiness if you go digging too. The crystal malt that gives True Course its colour adds… Read more
Golden American hops that begin with "C" hold a special place in the craft beer industry. Some time ago, it was the “Three Cs” of Centennial, Cascade and Columbus that made many West Coast IPAs what they were, with Chinook later becoming just as important. Today, it's Citra that's one of the most popular hops from the US, with its rise showing no sign of slowing as hop growers plant more and more acres of it. Braeside Brewing’s Cee Storm is a tribute to hops beginning with C, with CTZ,… Read more
Golden Yellow When breweries come together for collabs, it’s often favourite or novel hops that end up being at the centre of any releases but Braeside Brewing have followed a different path. Their three-part Expat series sees them instead champion malt and classic styles from the British Isles, with each beer named for the highest peak in each locale. Brewing the beers for winter was an easy choice to make too and was driven by Braeside Brewery’s own love for those classic beers as well as the fact their… Read more
Rich Brown We might need to check in with Braeside Brewing – there seems to be some kind of generational clash occurring at the Melbourne brewery. Medulla Oblongata is a hazy IPA featuring all Australian hops and malts and, given the crocodile on the can, the beer’s name is quite clearly inspired by the pinnacle of comedy for many Millennials, 1998's Waterboy. Featuring the twin combination of Galaxy and Eclipse, the hazy IPA produces quite a sweet aroma of peach juice while the flavour leans more towards… Read more
Golden As the end of 2021 fast approaches, Melbourne’s Braeside Brewing have once again looked to ensure they have a beer for all the moments summer might offer. Starting with the lightest of them all we have Christmas Oaked Lager, a 5.2 percent ABV European lager conditioned on French oak and lagered for ten weeks. Packed inside a can that resembles a Christmas sweater that’s been run through an early 90s video game, it’s a lager that lies close to being a Helles with a distinct twist, containing… Read more
Pale Yellow Well, they’re certainly keeping busy at Braeside Brewing, with the Melbourne brewery releasing an impressive five beers at once at the start of June 2021. They're a diverse enough mix of styles to make it hard to know the best way to work through them too but, almost certainly, the best place to start is with American Lager. The inspiration stems from Braeside’s head brewer Chip’s time living in America, where he fell for the amber and malt-driven lagers for which Brooklyn Brewery are particularly… Read more
Pale Yellow 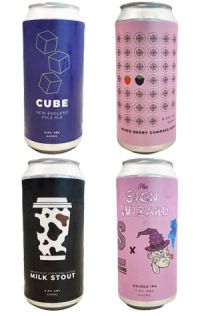 There must have been some busy days on the canning line at Braeside Brewing in recent weeks with no less than four limited releases leaving their brewpub in quick succession. Starting with hops, as many like to, and you have Cube, a New England pale ale in which they've combined kveik and English ale yeast strains with Mosaic, Lotus and Bravo hops and taken the booze content close to 6 percent. It's an approach that serves up plenty of sweet, juicy fruit gum aromas and flavours with a grassy edge,… Read more
Rich Brown When it comes to contemporary, fruit-laden sours of the non-barrel-aged or blended variety, they're typically intended to be cracked and poured cold, although that doesn't appear to be the best approach with Braeside's limited release Peach Compass Sour. When first encountered straight from the fridge there was an element within the aroma I wasn't expecting, something akin to the sweet, bacon-esque smokiness you find in the rauchbiers from Bamberg (or the Frazzles chips from the UK), albeit not as… Read more
Pale Yellow 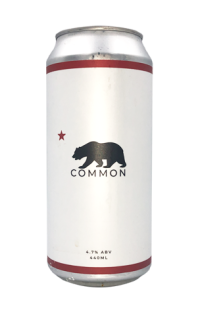 Common by name, California common by nature. This limited release is in the style popularised by Anchor Steam: brewed with a lager yeast but fermented at warmer temperatures more typically used for ales. It's a beer that brought to mind several traditional elements of the beer world: sweetly caramelised beer nuts are present in the aroma, while the combination of faint floral hops, drying, toasty malts, and some dried fruit sweetness placed the experience close to that of a German altbier or a twiggy… Read more
Rich Brown Braeside Brewing & Far Side Beers Side By Side

According to the label for this sour, Side By Side is a collaboration that's been three years in the making, indicating the family behind Braeside Brewing were plotting well before they'd even opened the doors of their brewpub. Their collaborators are team at bottleshop-meets-bar Far Side Beers, and the beer they set out to create together is a dry-hopped sour featuring two of the newest varieties from Victorian-based hop breeder and grower Ellerslie Hop. Those hops – Astra and Melba – go to… Read more
Pale Yellow