In WA’s South West, you find an array of breweries spread throughout the region’s idyllic landscapes, from sandy beachfronts and crashing coastlines to vineyard views and towering Karri forests.

Brugan, located in Wokalup – population less than 500 – finds itself situated amid cattle-strewn pastures that flip flop between luxuriant green in winter and pale golden brown in summer; it’s a picturesque location where owners Bruce Hathway and Megan Hardwick – the titular Bru and gan – brew both seasonal and year-round beers, offering locals and tourists alike an entirely unique hospitality experience.

First things first: don’t let Brugan’s seemingly isolated locale deter you – they are but two hours drive from Perth and one from Busselton – meaning it only requires a slight detour on a visit to the South West to check out their freshly-brewed beers in the fresh country air, as well as their casual, modern pub menu and a lush, grassed beer garden (complete with farm fresh sites and sounds).

With a focus on traditional styles, Brugan have designed a range they hope will suit just about every taste, created on a 10 hectolitre brewery and oftentimes featuring fresh hops from a local family grower. Said brewery is fully on display to the public, almost doubling as a centrepiece within the new build, industrial chic warehouse in which it resides. An upper platform and dining area allows punters to look down below on the brewing process, while experiencing the familiar smells and sounds of brewing.

The beer lineup varies depending on the season, but on any given day their core range and a few limited releases typically feature. When The Crafty Pint called in, an IPA, vanilla porter, fresh hop amber ale, hazy IPA and citrus sour were among the offerings, alongside the pale ale and Kolsch brewed regularly for the thirsty locals. Bruce – the owner and jack of all trades at Brugan – says he favours brewing traditional styles but is happy to explore modern interpretations and more on trend styles too.

Away from the beer and brewing, the team is proud of Brugan’s connection to vintage pub history and aesthetics; there’s a polarity between the historic Wokalup Tavern where Brugan resides and the contemporary industrial stylings of the brewing facilities and beer garden. The two are linked and run as one yet offer contrasting experiences, albeit both featuring classic country service with a smile.

For those looking to dine, you’ll find an approachable pub style menu made up of platters for sharing alongside items charred and roasted on the wood fire grill. Dishes like battered fish and chips and grilled steaks are representative of the brewery’s pub ties, while Cajun fried chicken wings with a Vanilla Porter BBQ Sauce makes for an equally beer-friendly offering. And in the spirit of showcasing local produce, neighbouring cheesemakers Harvey Cheese supply a fresh Harvati for fried cheese sticks; their haloumi also comes grilled in a quinoa salad.

If you pick the breweries you visit based entirely on uniqueness of experience, Brugan would tick a fair few boxes. From their semi-isolated location in a tiny historic WA town to a food menu that could rival a bustling city pub, not to mention their traditionalist approach to beers with smatterings of fresh hops, Brugan offer a point of difference for anyone seeking something new.

Yet despite the brewery’s distinctive nature, it has much in common with its Australian craft beer peers too: Bruce and Megan are focused on simply offering guests a good time centred around the beers and food they’ve poured their hearts – and names – into. So whether it’s a brief day trip, or you’re on a grand tour of the breweries in the greater South West, Brugan is another to add to your hit list.

Wednesday: 5pm to 8pm
Thurs to Sun: midday to 8pm

Free Pint With A Main Meal 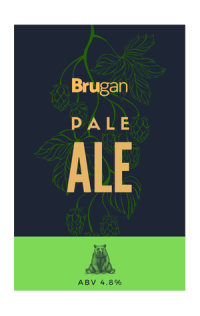 Brugan’s pale ale may well be their unofficial signature beer. Landing at sub 5 percent ABV and exhibiting mouth-watering fresh hop character, it's the go-to choice for those who want to enjoy full-flavoured beer and have a few of them. Pouring a light caramel hue, this pale ale displays vibrant pine and mixed citrus hop characters on the nose, while a medium bitterness on the palate partners well with a touch of malt sweetness and medium body. Brugan’s pale ale is a solid example of the style… Read more
Golden 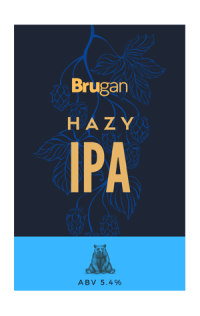 Brugan’s Hazy IPA is a modest affair, landing at a very reasonable 5.4 percent ABV and showcasing a mild, balanced bitterness alongside fresh hop characters of citrus and stonefruits. Made with a portion of locally grown hops, via a friend of the brewery family, this hazy IPA features a fresh hop flavour that sets it apart from competitors. Particularly vibrant citrus, grapefruit and stonefruit dominate against a clean yeast profile and light body. A long, clean finish carries remnants of said… Read more
Golden 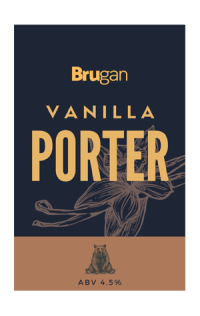 The brewing team at Brugan appreciate classic styles, focusing on sourcing quality ingredients and simple recipes. Their full-flavoured Vanilla Porter embodies these traits, offering up a textbook version of the old English style boosted with sweet, aromatic vanilla. Pouring pitch black with a dense mocha head, aromatics of chocolate and toffee are prominent, with some sweet, bready notes and vanilla also present. On tasting, the medium-bodied ale delivers a balanced bitterness along with bitter… Read more
Dark Brown 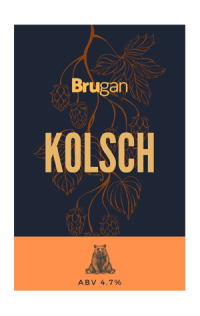 In line with their MO of brewing true to style classically-minded beers, Brugan’s Kolsch exhibits a light, bready flavour profile that is backed by a striking crispness, gentle noble hop-derived bitterness, and a touch of malt sweetness. A best-seller due to it’s session-friendly profile and familiarity, the Brugan Kolsch is an ideal, approachable staple for the Wokalup brewery. At an easy-going 4.3 percent ABV, the German hybrid is designed to sip alongside the brewery’s pub fare, while soaking… Read more
Golden Yellow 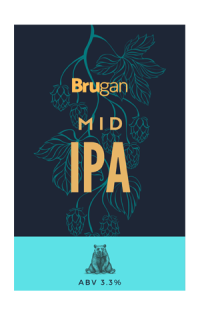 Brugan’s Mid IPA is a beer for those who want to enjoy something with flavour without risking a hangover, or a couple of beers while still driving home afterwards. Landing at 3.5 percent ABV, this Mid IPA is not defined by its low alcohol but instead its hop-derived flavours of bright citrus, sticky pine and subtle floral aromatics. Some malt is present to bring balance and body to an otherwise lighter in nature beer, with a touch of toffee and biscuit at play. A clean finish rounds out drinkability… Read more
Golden