Events Clean Up With Stone & Wood Stone & Wood is taking its Festival of the Stone – the event based around its annual Stone Beer release – on tour. And it's doing so with a series of parties that come with a good dose of environmental feelgood too.

The Northern Rivers based brewer has joined forces with the Clean Coast Collective (CCC) to help the latter in its aim to restore beaches, parklands and waterways to a better, cleaner state. You're invited to join them at each of their ten stops along the way; as a reward, you'll get to sink some Stone & Wood beer and tasty food at the Clean Up After Party, from which all profits will go to CCC.

Beer will be poured from the brewery's ex-army 1980 Landrover, there will be live music and locally sourced food, while the brewers will also use the tour to pick up various ingredients for this year's Stone Beer brew in April, including hops, malt and the rocks needed to caramelise the beer.

Jasmin Daly, from Stone & Wood, told us: "We have developed a relationship with Clean Coast Collective after our designer Jess Leitmanis went on a ten day beach clean up at Cape York last year. Over six days, the group removed 3.1 tonnes of marine debris, consisting of over 94,000 individual pieces of trash. We were inspired by this young, dynamic organisation that's doing great work and getting people involved from the communities they cross." 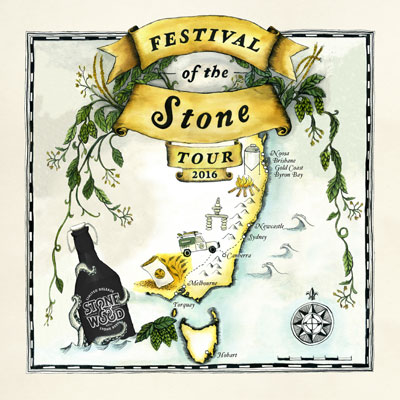 She says it's an extension of the brewery's Ingrained program, which they launched in their local Byron Bay community as a means of supporting grass roots social and environment causes. To date, it has seen brewery staff volunteer, provide donations and put on Karma Kegs for community groups and causes.

"So for us," she says, "when planning the tour, we wanted to partner with a group that is doing great work, aligns with our values and would want to come on tour with us!

As well as collecting materials for the actual brew, Jasmin says they'll be picking up artists along the way, both to perform and create art from the natural environment at events and to then head to Byron for the main Festival of the Stone party on May 14.

One ingredient they're going to be collecting is more rocks, a crucial ingredient in the Stone Beer that are added to the wort when it leaves the kettle to be transferred to the fermenter.

Previously, volcanic rocks co-founder Brad Rogers had brought with him from Fiji had been used, leading us to question whether they were no good any more. Apparently they're still good to go. But, says Jasmin, "the fire's getting bigger so we need more rocks!"