Events at the Australian International Beer Awards Gala Dinner last year must have felt like validation for two Australian breweries in particular. WA's Mash Brewing took out the Champion Australian Beer title for its Copy Cat American IPA and 3 Ravens, the Melbourne brewery that looked like going out of business little more than a year earlier before being saved by Mash's owner, took out Best British Ale and the Champion Small Australian Brewery title.

The last of these was marked by the evening's most memorable acceptance speech, as an overwhelmed head brewer Adrian McNulty ended a short appearance on stage with a simple yet exuberant: "Fuck yeah!" As he pointed out, 3 Ravens had never won a gold, let alone a trophy, in its decade long existence yet here it was with two of the big ones.

It was some surprise, then, that shortly afterwards Adrian was to move on: to Moon Dog where his creations have included the likes of Bad Boy Bubbly barley champagne. A mini-merry-go-round of brewers ensued at the Thornbury brewery he left behind with former Boneyard brewer Brendan O'Sullivan at the helm when the music stopped, which was kind of appropriate as he'd started his brewing career under Mash's head brewer Charlie Hodgson when the pair were at Gage Roads. He's since been joined by former Matilda Bay brewer Tim Miller (below right) as head brewer and, just this week, by a new assistant brewer, Murray Robinson who Melbourne beer folk will know from his time hosting events at various venues around town.

Much else has changed too, with 3 Ravens expanding to three times the size it was a year ago, improving other elements of the brewery and, most recently, encouraging Brendan to indulge his passion for the sour German style of beer, Berliner Weisse. This week, he debuted three new beers: a straight Berliner Weisse called Wizz Fizz and two fruit enhanced, barrel-aged versions, Granny Apples and Purple Stain, all of which will be pouring at special events during Good Beer Week before release later in the month.

"They hired me to do what I do best," says Brendan (below left). "Berliner Weisse is one of my favourite styles and one I've been brewing at home for about seven years. I've had a lot of success [as a home brewer], winning Best Wheat Beer in Perth for three years and Best Farmhouse Ale in Australia."

Thus, with a number of new, larger tanks in place at 3 Ravens leaving one 1500 litre tank no longer needed for the core beers, it was decided to turn it into Brendan's sour tank. He brought his concepts from home – including adding eight year old Saaz hops to the mash in the brewing process and merely pasteurising rather than boiling the beer (ie bringing it to 100C then immediately turning the heat off and chilling to 47C instead of boiling with hops for an hour or more as with most beers). The beer is fermented with two strains of lactobacillus – one brewing yeast and one from the dairy world – before being refermented later with a German ale yeast. 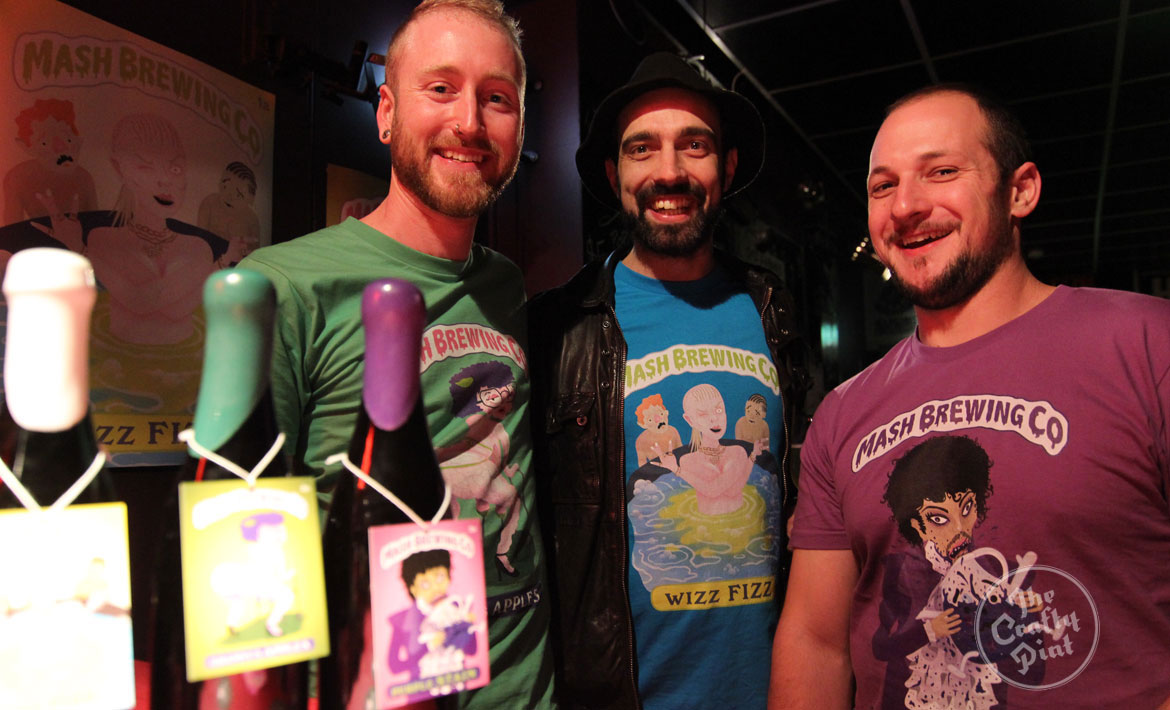 In the case of the first three beers, some of the base beer was left inside its steel tank while a few hundred litres made their way into former Shiraz barrels. Into one was added fresh Granny Smith juice that Brendan sourced from an orchard in Office and which had a glowing green colour that wouldn't have looked out of place exploding from an alien's head in Mars Attacks! (plus a little elderflower syrup) to create Granny Apples. Into the other went all manner of berries and grapes to create Purple Stain.

"Purple Stain was inspired by the grape flavour I used to love drinking when I was growing up," says Brendan. "It's playing off those childhood memories."

All three will be released in wax-sealed wine bottles with a different colour wax for each. There will be no labels stuck on the bottles, rather tags hung around their necks featuring twisted artwork with a nod to the Garbage Pale Kids from one of Brendan's longtime gig-going mates, illustrator Brendan Ninness. Wizz Fizz features a character like Yolandi Visser from Die Antwoord while they'll be hoping Prince doesn't feel litigious if a bottle of Purple Stain makes it to Paisley Park.

The idea is that Wizz Fizz will be a permanent release with Brendan experimenting with different flavours in the barrels as one-offs. The Little Ravens series of short run beers will also restart soon, with a barrel-aged imperial stout that we'll list on this site soon coming first.

One thing to note is that the Berliner Weisse releases bear the Mash Brewing title as it was felt they were a better fit for the WA brand, which already has its "Illustrated Ales" range.

"We're really excited about what's coming up," says Nathan Liascos (above centre), who oversees both brands in Victoria. "With Tim joining the team we've got a good balance between the bigger brewery pragmatic approach and the more creative [Brendan].

"There was a spike after the Awards – it's always nice to get emails coming in and have more pull than push [for your beers] and that's continued throughout the year. Charlie [at Mash] has continued to take out awards and Copy Cat has taken on a life of its own."

While Charlie has continued kicking goals in WA, the younger brewer with whom he shared home brews in their Gage Roads days has been reworking the 3 Ravens range, despite his predecessor bowing out with several gongs and medals under his arm. 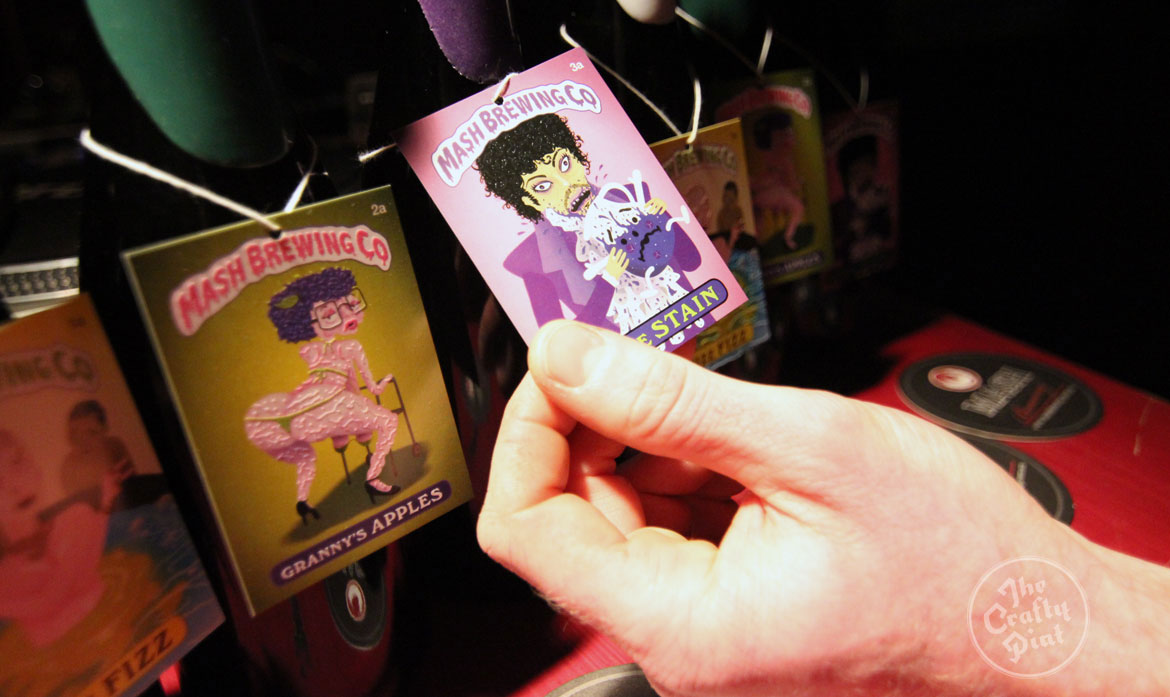 "I didn't think there was really a story to the beers so I thought I could improve them," says Brendan.

"The Golden Ale said it was an altbier but the recipe didn't reflect that so I've made it into what an altbier should be. In the Dark I increased the smoked malt. I've got rid of a lot of stuff I didn't understand and changed a lot of the water profiles; I made small tweaks to the 55 [American pale ale]."
But what about the English Ale, the ESB that took out a trophy?

"When I started, Adrian made me promise thatI wouldn't change his English recipe as it had won the Champion trophy," says Brendan. "But one of the first things I did was to strip it right back. I felt bad for Adrian but I tried to simplify it as I felt you wouldn't find an English brewer with nine different malts in their beer. It's the same yeast and the same hops, but I Burtonised the water [adding salts to make it more like the water in Burton-upon-Trent where English pale ales made their name]."

So any pressure then when it comes to defending the titles?

"That's one of the most exciting things," he says. "I'm really competitive!"

You can catch up with the 3 Ravens and Mash teams at a few events during Good Beer Week:

You can also be at the Australian International Beer Awards Gala Dinner where the collaboration between 3 Ravens and fellow Aussie champs Thunder Road and CUB will be unveiled. Details here.

And you can join the Good Beer Week and AIBA judges before than at the Hop Off Dinner (where we'll be representing one of the aforementioned beers on behalf of the GBE team) too.