Canberra has long been known as home to some of the best beers in Australia. There may not be that many of them, but they tend to come with a reputation. The Wig & Pen Tavern has collected two Champion Brewery titles at the Australian International Beer Awards in the past while the brewer who was at the helm when they won them, Richard Watkins, now pumps out beers at the thriving BentSpoke Brewing Co he opened with partner Tracy Margrain last year. Yet outside those brewpubs and the venues operated by Zierholz, there's not a great deal of craft beer to be found around the city.

Enter a man on a mission to rectify the situation.

Kevin Hingston (above centre) today (June 4) launches the first Pact Beer Co beers in his hometown with the goal of persuading bars, pubs and restaurants to broaden their beer horizons. First up are the Mount Tennent Pale Ale and the Three Lakes Hefeweizen that features quince and was brewed for last month's GABS festivals, with the first kegs being tapped at Civic's Transit Bar.

"The craft scene is growing but there's a gap in the local bars," says Kevin, who continues to work in IT while brewing "gypsy" style at, to date, Blackrock in Sydney and Prickly Moses in the Otways. "We want to grow a beer brand where you can go to a restaurant and grab a bottle.

"It's a really fantastic beer, super hop forward, and I think people will enjoy it."

Indeed, such has been the reaction locally to date that he's looking to brew bigger batches already – possibly one at Melbourne's Hawkers – to meet demand. And the intention is to get into bottles as soon as possible too as very few Canberra venues have the ability to handle draught.

The launch of Pact comes on the back of a short but success filled career as a home brewer; in fact, the invitation to brew a beer for GABS came on the back of his second triumph in the Australian national home brewing championships. He only started brewing four years ago, claims it took him a year to find his feet, then promptly set about winning pretty much everything he entered. What's even more remarkable is that his first venture outside mainstream lagers was no more than six years ago.

"I was a 30 can VB drinker in recent memory," he says. "It was a Fat Yak that got me going, 'Wow! I like the fruity stuff that's going on here.'

"I started growing my own hops as a gardening experiment and then it all avalanched from there."

Indeed it did, with Pact coming about as a joint venture with mates from the local beer scene. Marc Grainger (above right), who runs Transit, is focused on sales and distribution, while Tim Osborne (above left) oversees operations and finances and Kevin's wife handles branding. And it was them and other mates who, on the back of his home brew wins, suggested he stepped into the commercial realm. 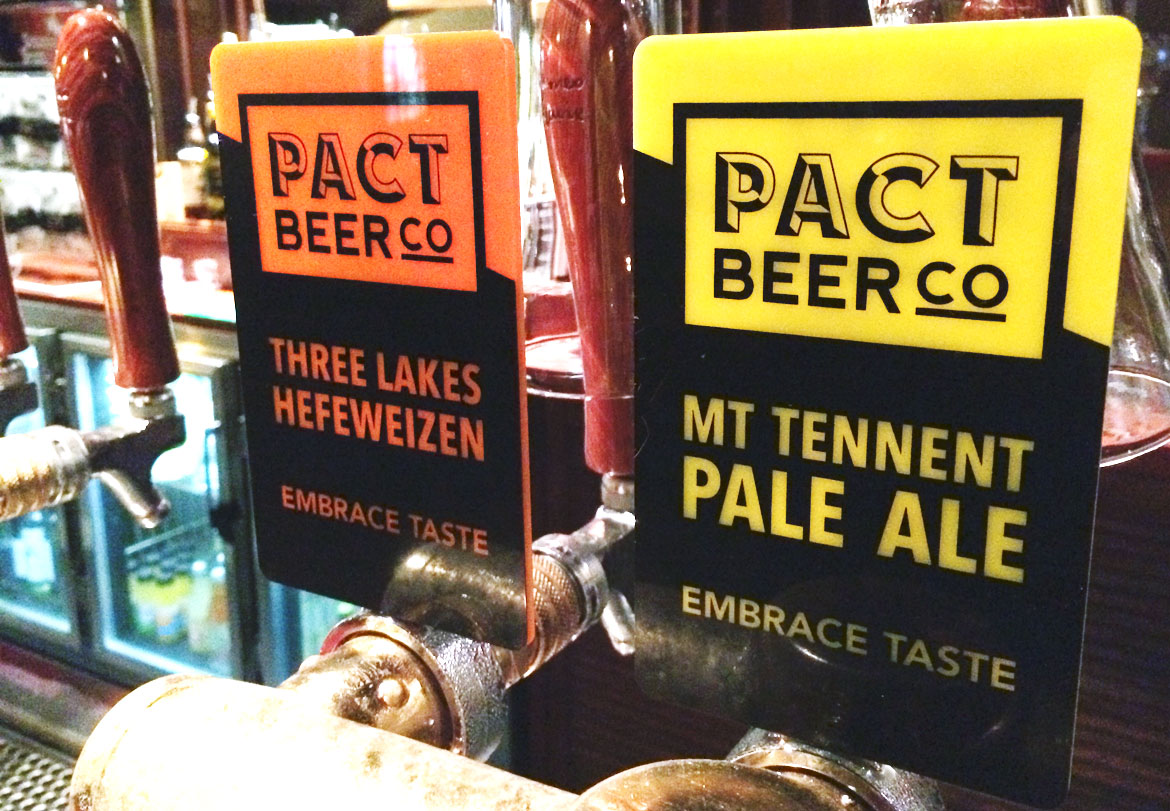 The pale ale he's launching today is based upon a recipe that picked up third in the national championships and takes its name from ACT's Mount Tennent, the place that takes its (misspelt) name from bushranger John Tennant, as it's where he used to pounce on his prey in the early 19th century.

"We are in a relatively virgin market here compared to Sydney, Melbourne or even Brisbane," says Kevin. "[Craft beer] is still quite a novelty so you have local pride [in the brewers here]. We want to have a nod to where we are but avoid cliche."

The second beer is his signature brew, one that has collected the national title twice.

“It was really exciting to get the call up to brew for GABS. The festival beers are always pretty creative, so I knew I had to brew my signature quince beer. I’m really glad we’re able to launch with these two very different beers – one showcasing our core sessionable approach, and one displaying our more experimental side.”

As for the name Pact, it was chosen from a list of around 30 or 40 that were whittled down over "focus groups" at Transit. Akuna Street Brewing Co and Limestone Lakes were among those discarded, with Kevin keen on a "punchy one-worder" and Pact getting the nod as the only one they could "form a pact on".

If you're not a Canberran then some of batch two of Mount Tennent should make its way to Sydney and there are discussions underway with the Scratch Bar team in Brisbane too. Beyond that, there are medium term plans to build a brewery in the ACT. All of which is pretty good going for someone who was still knocking back VB just a few years ago.

Following its launch at Transit, the Mount Tennent will go on sale at venues including The Durham Castle Arms in Kingston, the Pot Belly in Belconnen and bottleshop Plonk will also be offering one and two-litre takeaway growlers.