According to the team behind Perth’s newest craft beer bar the answer is simple: lay them on the floor as a statement piece, of course.

The Netherlands / New York themed Dutch Trading Co opens this evening (June 11, 2015) and is interesting not only for its unique flooring but also because of the team involved. The three men behind the craft beer bar are Andrew Bennett and Daniel Sterpini of The Classroom and Lucky Chan’s Laundry and Noodle Bar alongside Joel Beresford, the beer guru until recently found at the helm of one of the city's best bottleshops, Cellarbrations Carlisle.

Andrew and Daniel are no strangers to a solid bar theme, with their first venture, The Classroom, winning the AHA Best Themed Small Bar 2012 and Gold Plate Awards for Best Small Bar. And their next venture looks set to do the same: Australia's first partially crowd-funded restaurant, Lucky Chan's, is currently being lauded by My Kitchen Rules’ Manu Feildel as his favourite new Perth restaurant.

As for Joel, he spent ten years building the beer brand at Cellarbrations Carlisle and is an unassuming but respected member of the Australian beer community with the kind of experience that lends real weight to the project.

"It's been a really tough decision to leave Carlisle but this opportunity was too good to miss," says Joel. "Andrew and Daniel are hospitality veterans and the venue is going to be amazing. I will still be involved with the Carlisle team and I know Adam (O'Brien) and Tim (Hoskins) are passionate about driving craft beer in Perth."

Although initially opening as a ten tap pop-up bar, The Dutch Trading Co’s future development plans include function areas and beer garden. The venue’s Unrestricted Tavern License allows for site consumption without a meal too and, more interestingly, takeaway purchases.

"The plan is to carry a range of up to 80 varieties of beer for takeaway purchases," says Joel (pictured below right carrying out final pre-launch preparations). "This might sound ground breaking for Perth but bars like Archive in Brisbane and Two Row and Slowbeer in Melbourne have been doing this for some time. 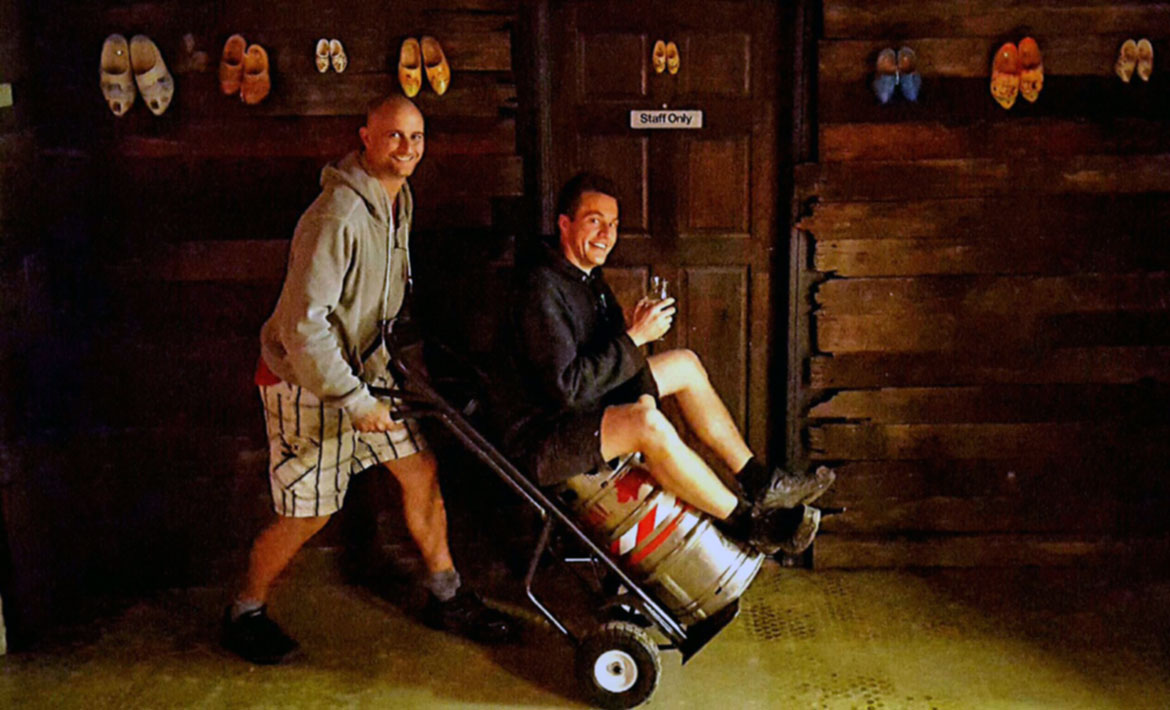 "Internationally it's quite common, especially in Europe. What better way to try something at the bar and then be able to take a couple of beers home?"

Dutch Trading Co is located just ten minutes south of Perth in Victoria Park, "central enough" according to Joel, who adds: "I've wanted to start something for a while but didn't want to it to be right in the thick of things. I wanted it to be a destination and this strikes the balance between the two.

"The Victoria Park area is really developing and I believe our venue will bring added vibrancy to the local scene as well as the larger Perth beer community. The Victoria Park council has been really supportive as well."

Beers pouring on the opening night beers will include Nail Brewing's Clout Stout and Tilquin Gueuze on tap as well as hourly samples from Joel’s personal cellar.

“My love of sour beers will shine through this venue," he says. "I’ve dug out 1998 Hanssens Kriek and Armand’4 Herfst for the occasion as well as bottles of Black Tuesday [The Bruery], Goose Island Bourbon County Stout Vanilla Rye and Mikkeller Stella One to share."

If that's a sign of what's to come, the bar scene in a city that's been slow to embrace the good beer movement is in for a real treat.

This is the first article for The Crafty Pint by contributor Guy Southern. Guy drinks and writes about beer, goes for a run most mornings and named his beer blog after a party name.