In recent times, the breweries of Sydney’s Inner West seem to have undergone some form of mitosis. The host brewers have been nurturing a legion of gypsy brewers but these are now growing up and spreading across nearby suburbs to open breweries of their own.

The guys from Grifter used to brew at Young Henrys but now have a home in Marrickville. Wayward has brewed everywhere from Batch to Rocks and is about to roll up the doors to its Camperdown brewery. Akasha also brews out of Rocks (who themselves gypsy brewed for several years before settling in Alexandria), but only until their brewery opens in Five Dock. Willie the Boatman spent time at St Peter's prior to firing up their own wonderfully ramshackle assortment of brewery bits. You get the picture…

And when you consider the likes of Shenanigans, Pixel and Ironbridge Brewing are based in the area and all hope to one day have a brewery of their own, there’s little sign of things slowing down.

It’s the last of these, Ironbridge, which perhaps has the lowest profile of the lot, though that’s not to say they’re necessarily new to the game. After meeting in Spain nigh on a decade ago and firming their friendship through a love for beer (and spear fishing, of all things), Trevor Skelly and Simon Fairbanks are hoping their seven years of home brewing will set them on course to make a bigger splash in the crafty pool.

The Crafty Pint caught up with the pair over a few schooners to find out more but, amidst the general hum of pub ambience, the finer details of conversations about the relative merits of Burtonisation, going back to beer school and the hidden perils of beer labels were lost. However, Trevor had kindly sent through some answers for the latest in the Who Brews…? series so, without further ado…


Who are you?
Simon and Trevor. We’re mates that have been making beer for seven or eight years and decided to have a crack at making our passion our job.

Where do you brew?
Our pilot brewery is in Lilyfield. Our commercial brewing is done in a few different craft breweries in Sydney and farther afield in NSW, depending on availability.

Why do you brew?
Any brewer will tell you brewing is easily 80 percent cleaning, so why we’d do that voluntarily is a question our wives would like an answer to. But it’s something about building a recipe and having a specific taste in mind then figuring out and working on how to get it just right.

But a lot of it is mainly because we love beer! 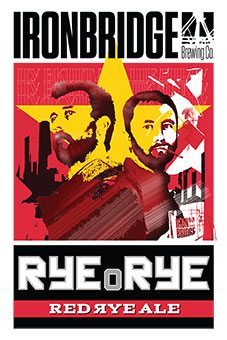 We have a small stable of regular brews:

Plus a couple seasonal/specialty brews:

What's the inspiration behind the brewery name?
Our pilot brewery is in Lilyfield, just near the Iron Cove Bridge = big metal bridge = Ironbridge. It’s like naming your child: there are so many possibilities it’s hard to know what to choose but we like the idea of hand-forged beer – crafted brews made to be enjoyed by the jug full.

There was something strong, solid and reliable about Ironbridge that worked for us.

It would have to be the Rye o’ Rye Ale. We’d been playing around with different grains and adjuncts for a few years and our rye beer was always in demand on the home taps. We hadn’t really thought of it for commercial brewing but we had a chat with Scotty Morgan [head brewer at Rocks Brewing] and when he asked what our first beer was, he added “… and don’t say pale ale!”.

We kind of decided there and then to have a crack and start with the rye.

What beers are in your fridge right now?
Trevor: A couple of Lord Nelson Three Sheets, some homebrew (our IPA pilot and our Belgian Karmalat) and a Clown Shoes Hoppy Feet – just to treat myself!

Simon: Feral Hop Hog, a Coopers Pale Ale and one of our English IPA pilot brews.

And which beers are found in your fridges most frequently?
Well, obviously our pilot brews are a dominant player. We still brew for ourselves when we can and we are always working on new recipes, so someone has to consume the surplus!

Simon and his wife are pretty partial to a nice hoppy ale and I probably favour the darker, bigger beers this time of year. When I find it, I’ve been known to enjoy a Sheaf stout.

Where do you want to be in ten years?
The Bahamas?

Like most gypsy brewers we have a goal to run our own brewery. We’re both studying for our formal brewing qualifications as we feel that a proper brewery needs a greater degree of technical understanding than making good homebrew, so we’re knee-deep in chemistry right now.

We are working on plans for the brewery and when it comes to breweries things don’t happen quickly or easily – but watch this space!

Where can people find your beers?
We’re around the Inner West primarily and like most craft beers the longevity of the taps varies from venue to venue. Some of our best supporters are and have been the Knox St Bar in Chippendale, the Temperance Society in Summer Hill, Woolpack in Redfern, the East Village in Balmain, Forest Lodge Hotel in Glebe and the Empire Hotel Annandale.

We’re now out and about in bottles too - so grabbing a takeaway Ironbridge is possible!