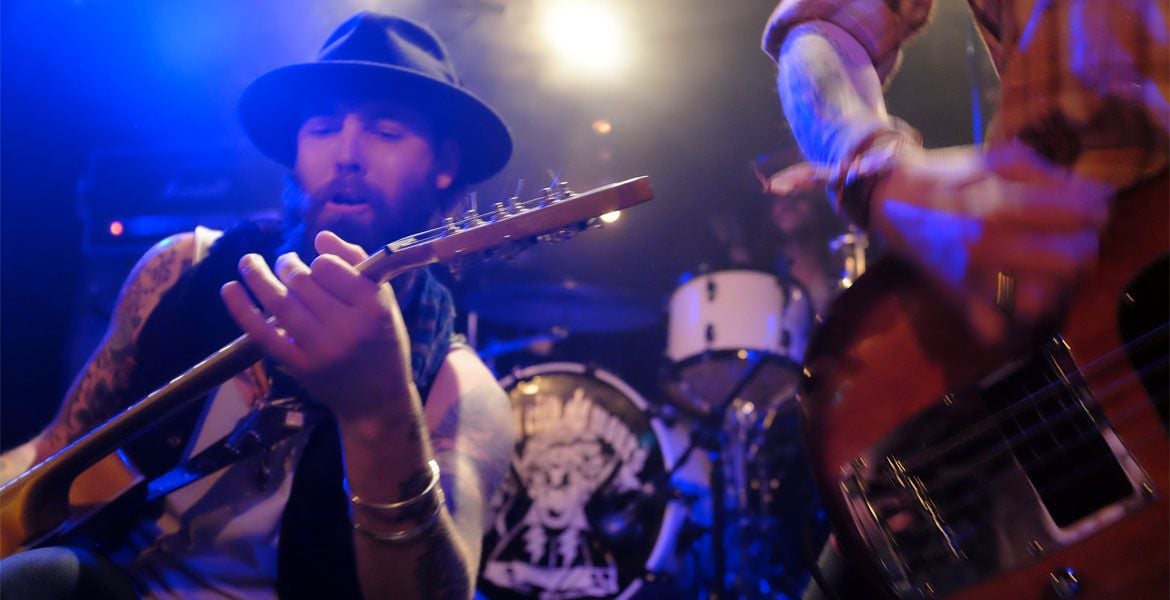 Aaron Schultz is a brewery assistant for Melbourne’s Temple Brewing Company and also an accomplished musician in his own right, having toured the nation as guitarist for metalcore bruisers Behind Crimson Eyes.

Earlier this year, he approached legendary pop-punk quartet Bodyjar (pictured below on brew day with Temple brewers Glenn Harrison on left and Aaron second from right) in the hope that they might like their own branded beer. Surprise, surprise, like Metallica and Iron Maiden and many other bands before them, they were quite taken by the idea. It also came at an auspicious time: the 15-year anniversary of their breakthrough album How It Works.

Aaron corralled the band into the brewery bar and discussed options. First: it had to be drinkable.

The brewer shrugs: “I can’t see the fans drinking lots of a milk chocolate porter,” he says. So they settled on a sessionable, single-hopped Australian Pale Ale.

The late August brewday was open to fans and friends of the band and saw Stevo from Area 7, Gordy Foreman from Frenzal Rhomb, and Chris Cheney from The Living End all milling around the tanks. After a jolly time on the day – and with the beer maturing in the bright tank now – Bodyjar Pale Ale will join the band on their anniversary tour in kegs and bottles and also pop up at the Temple bar.

Aaron is a relative newbie to the beer world, but he knows that the bug has caught on with other bands. While touring with Canadian post-hardcore act Silverstein, he discovered that they were huge craft beer nerds.

“It seems that they tour just to go to breweries,” he laughs.

Behind Crimson Eyes have sampled the wares at Fremantle’s Little Creatures with Perth modern rockers Gyroscope. And two members of late 90s Melbourne pop-punk act Game Over worked at the recently relocated White Rabbit brewery, when it was still in Healesville: Paul Stanway brewing and Elton Pinkster at the bar; the latter can now be found at Croydon’s Public Brewery.

Aaron agrees that there is some connection between those who obsess – whether it be over tunes or brews.

“Craft beer is a little different,” he says. “Every person that tries the same beer picks up something different as well.” There’s also the gadgetry angle: fiddling with equipment to produce just the right tone.

This Bodyjar / Temple pairing might be just the beginning for Aaron, especially since Behind Crimson Eyes are working on new music and planning more tours.

Sydney's inner west kings and queens Young Henrys have been joining forces with musicians for years.

“At Young Henrys we want to get people involved with craft beer, to spread the message beyond the craft beer circle,” says director and musician Richard Adamson. “We thought that was a really good way to do it, to involve musicians and reach some of their audience.”

This sound / taste nexus kicked off when Adamson met Peter Fenton from Sydney 90s cult legends Crow. It turned out there was much mutual appreciation, and what emerged was Young Henrys' first musical collab – Black En More – a spicy yet easy-drinking black ale that sold out within a week. 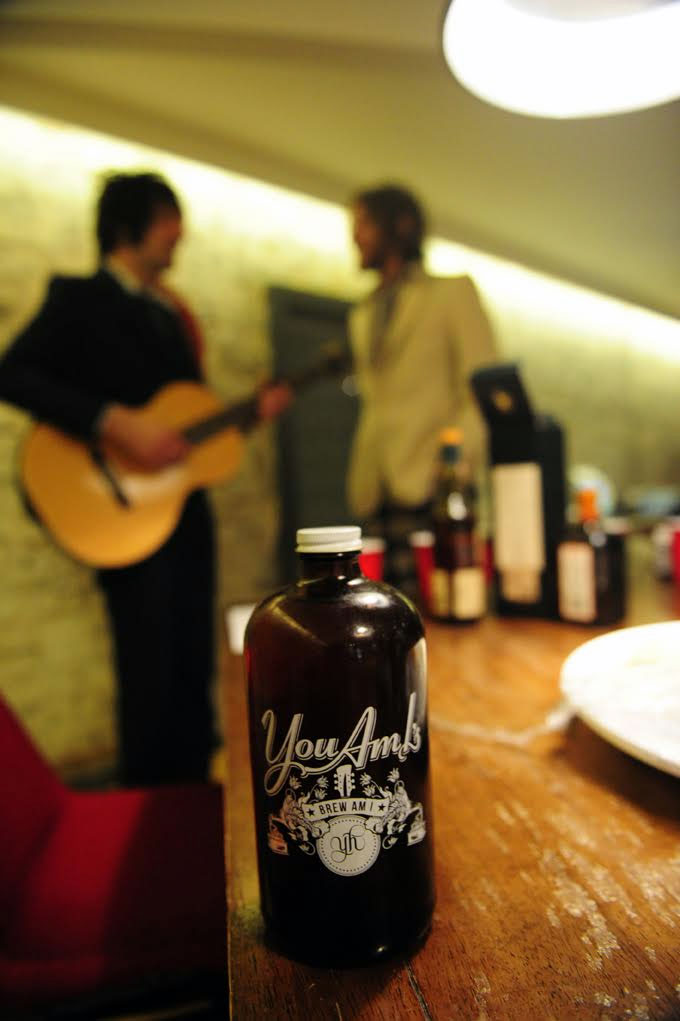 From there, truly collaborative brews have been concocted with You Am I (a New World pale with ingredients sourced from each member’s stomping grounds called Brew Am I, pictured right, that was sold on their 20th anniversary tour), PVT (an English bitter/hefeweizen hybrid), Frenzal Rhomb (a wheat-free vegan Belgian pale that was launched at the Corner Hotel during Good Beer Week 2014), Front End Loader (a muscled rye agave ale at the spooky ABV of 6.66 percent), Hell City Glamours (whose Oscar McMahon, pictured top, is one of the owners of Young Henrys) and more.

There have been different levels of involvement – Fenton actually penned a beer manifesto, other musos merely conceded that their favourite beer is ‘a free one’ – but so far each one is the result of a genuine creative union.

Richard admits to discussing flavours in terms of treble and bass notes.

“We almost talk in a musical language to people so it translates when we’re working on something. We always try to push people to create something that we think reflects who they are, rather than us just slapping a [musician’s] label on it. Otherwise there’s not much point.”

“Jason [Whalley, Frenzal Rhomb singer] was saying, ‘This beer’s a disaster’ because it was so strong,” says Adamson, laughing about the punk act’s boozy effort. “He had three on stage and said, ‘I need some help with this!’ He actually really loved the beer but it came out so kick arse.”

Front End Loader were also chuffed with their Fresh Six, made with agave due to the band’s propensity for onstage tequila shots. “It fitted their style perfectly,” Adamson says.

“We’re going to do an interpretation of one of his original recipes,” Adamson says, “which is really exciting.”

Another conjurer of tunes and malts is Craig Westwood. Beer fans will know him as a brewer and barrel-program overseer for Mountain Goat. Music fans will know him from cult grind act Christbait, brawny rockers Dern Rutlidge, and his current efforts solo and with epic doom unit The Ruiner.

During Good Beer Week 2015, Two Birds brewer and guitarist Wilson Hede, as well as Moon Dog brewer Adrian McNulty and others, conspired for the Craft & Cult gig at Grumpy’s in Fitzroy. Westwood’s The Ruiner headlined and tasty drops were paired with monster riffs.

“One thing that has really annoyed me,” Westwood reveals, “is that you’d often go to really good live venues but the beer selection would be pretty pedestrian and crappy. They’d always be going on about their impeccable taste in music but they’d have the equivalent beverage taste of Justin Bieber. They just have a Top 40 selection of booze.”

Westwood has homebrewed for over a decade and he sees the crossover in those who switch from the malt shovel to the guitar and back. He credits overseas touring for his turn to craving craft. 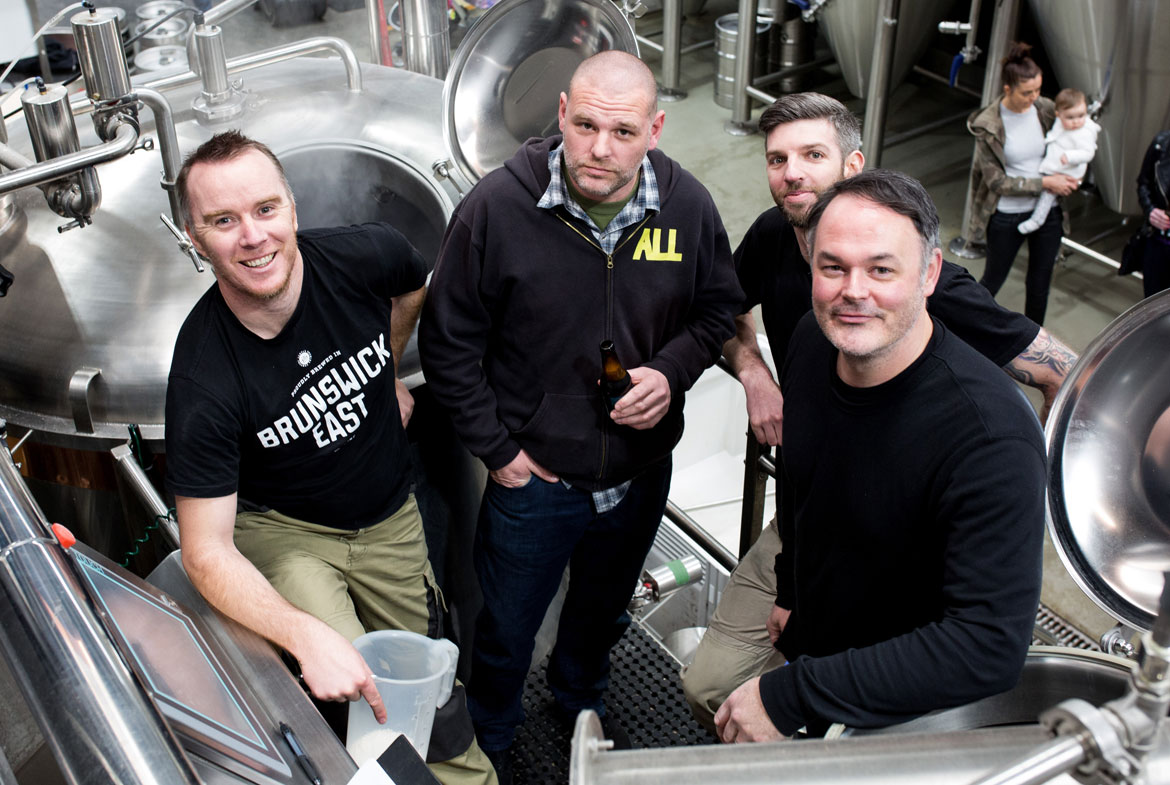 “Once I’d played overseas, particularly in Europe, and saw the beers that they were giving us in our rider, it was a whole other level up,” he says. “There’s always an association that when you go to play there’s always beer – you have a lot of downtime so you tend to drink. Next thing you know you’re being a bit more discerning about what you drink.”

Westwood can see the similarities between being in a brew team and being in a band – both the toying with creativity but still adhering to formulas “to execute what you need to do.”

“The only thing is that you tend to get paid more regularly if you work at a brewery than if you’re in a band,” he laughs wryly. “And no one can illegally download your beer.”

Andrew Tijs has been writing about music for fifteen years (and craft beer for three), has seen every band in this article play live (except The Ruiner) and was certainly drinking a beer at the time (the PB&J pale was fun).

music temple you am i young henrys collaboration goat