Aside from a handful of beers from the bigger brewers, Australians haven't really made much of an imprint on the American beer landscape. Mountain Goat flirted with a spot of export, as much because they could rather than fired by any grand plan for world domination, while, in the past year, Tasmania's Two Metre Tall has been snapped up by the discerning Shelton Brothers and Bridge Road has started sending beer to the West Coast, where there are many interested in his work with new Australian hop varieties.

But, essentially, that's it, understandable given the size and maturity of the US craft beer market and the jaw-droppingly low prices at which American brewers can get their beers to drinkers; "Nine bucks for a six-pack of awesome 7 percent IPA? Don't mind if I do."

Yet today, on the other side of the Pacific, Americans will get a taste of something brewed up by a pair of Australians, literally.

Pallet is a new beer magazine with a difference. And not just different because it's been created by Australians and is launching in the US. Different because it aims to be more – or something else entirely – than beer magazines as we know them; sure, there will be some beers in it, some brewers too, but the aim is to deliver stories from anywhere in the world on any subject in the world that someone who puts thought into their choice of beer would want to read. As the front cover states: "Only interested in everything".

It's been brought to life by Rick Bannister and Nadia Saccardo, a pair who met while working on Smith Journal, a publication whose DNA can be seen echoed in parts of Pallet, with more than a little help from Sam Calagione, the founder of Dogfish Head. The first edition (of which you can see excerpts above and below) lands on shelves in the US today, with the plan being to make it available in Australia, and elsewhere, in a year. In the meantime, Aussies will have a chance to get their hands on a copy – and Sam – in the coming weeks, but more on that later.

What was to become Pallet began when the company that published Smith Journal and sister mag Frankie was sold to a bigger publisher and, like many staff at breweries that are sold to multinationals, Rick and Nadia decided this wasn't what they'd signed up for and left. Rick had previously spent five years at Stone & Wood, joining in the brewery's early days, before returning to the magazine world with Smith and felt the beer world was missing something. 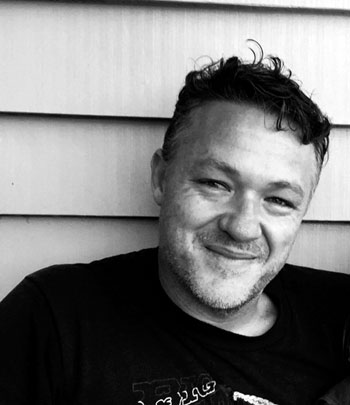 "It's essentially for people who like to think and drink," says Rick (pictured right) of Pallet.

"From my own personal experience working in the industry, craft beer drinkers are intellectually curious people by nature. The fact that they already drink craft beer means that they are curious enough to find stuff that isn't mainstream.

"I had the idea to create a magazine that reflects their interests. Beer is very eclectic, so the magazine is about beer but not literally. [It's] beer as a conduit to tell these stories that I think craft beer drinkers will resonate with.

He admits that launching a print magazine in the current turbulent media climate is "in some senses insane" but, he says: "The industry is so great that I felt it deserved something a bit special that had some thought put into it."

For the first edition, they plumbed their network of international contributors – not a beer writer among them – and started putting together content that they hope will appeal to drinkers looking for something a little left of centre but also with a global appeal. Thus the first edition comes with a feature on Zamrock, a psychedelic music scene that exploded in Zambia in the early 70s, and a Mexican tribe that are the world's greatest long distance runners and who also brew their own beer.

Then there's a feature in which four brewers, including Mikkeller and 3 Floyds, were paired with four artists and asked to come up with beers and artwork inspired by Breaking Bad. And, on the last page, you'll find an interview with Gay Talese, whose 1966 profile "Frank Sinatra Has a Cold" is regarded as one of the greatest magazine features of all time.

But, while they believed in their idea and knew they could put together a great-looking mag, Rick and Nadia figured early on that their cause would be helped by a figurehead. So, having obtained Sam's number from Rick's former Stone & Wood colleague Brad Rogers, they made their pitch.

"We had the idea of making him an executive director [so] cold called him with the idea," says Rick. "We knew that he had that kind of collaborative approach to business. We sent him some copies of Smith; he's a very Smith Journal kind of guy with a lot of interests."

He jumped at the opportunity, the pair flew to the States to meet him as part of a reconnaissance mission, and now he's not only on board as executive director but has penned an article on beer-wine hybrids for the first edition (pictured below) and is flying over to Australia for a couple of launch parties (of a kind as the mag isn't officially launching here yet). 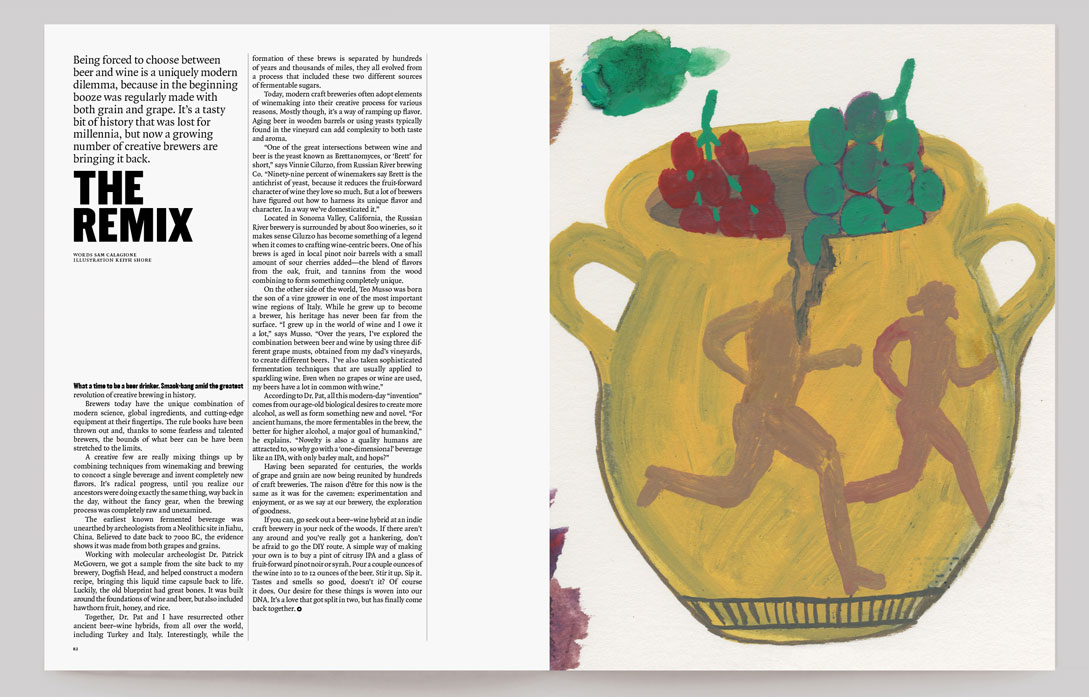 It's the sort of coup that will have many Australian importers cocking a surprised eyebrow. Dogfish Head has long been one of the most sought after US brands, only appearing here via grey import as the brewery has, to date, refused every advance from Down Under. Yet Sam will be hosting two events, at The Local Taphouses in Sydney and Melbourne, at which the first officially and freshly imported Dogfish Head beers will be pouring. If ever two events were guaranteed to sell out fast...

Of the coup, Rick says: "He just loved the idea. We said we were going to launch it in Australia and he said he'd come. [Then when we decided to just launch in America] he said he'd still come."

"He said there could be no big brewer advertising, no faux craft," says Rick. "It was a difficult conversation with [our person selling advertising] over there because she had good relationships with the likes of Blue Moon. Breweries have to be at least 50 percent independently owned or no advertising.

"Instead, we've been going to Sierra Nevada and those guys. The eye opener is that their ad budgets are tiny. It's the same scenario as here: you don't need to [advertise] when you're a growing business."

For now, Pallet will be a quarterly publication and is available in a number of major chains across the US, such as Whole Foods, as well as independent book stores and some of the bigger cellar door operations. It's complemented by an online project that doesn't mirror the print edition but instead is designed to create a miscellany of short, personal stories from drinkers around the world. 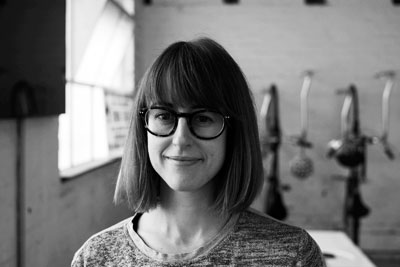 As they get things off the ground, Nadia (pictured right), who freelanced for the likes of VICE after leaving Smith Journal, is basing herself Stateside for three months where, to date, there hasn't been too much surprise at a pair from the other side of the planet arriving to launch a mag, other than one editor asking: "What's going on here? What are you guys doing?"

"It's been an interesting exercise for sure," says Rick. "Starting and running a business in the States has been interesting.

"It's a crazy game to get into but hopefully the magazine will be [available in Australia] within a year."

As for the magazine's name, it was inspired by an article Rick and Nadia ran in Smith Journal.

"We had a story by an American journalist on the wooden pallet – 3,000 words saying it's the most important piece of international commerce. It was historic and poignant, saying the pallet was invisible but essential for life.

"It's the idea that there's a story in everything if you take the time. [Furthermore] the beer you are drinking has been moved on a pallet; it delivers beer to the world."

The Pallet Australian launch events take place in Sydney on December 23 and Melbourne on January 2. There will also be a competition to win a day brewing with Sam in Sydney, details of which we'll have in the Events Diary later in the week.

You can check out Pallet's online presence and order it here. 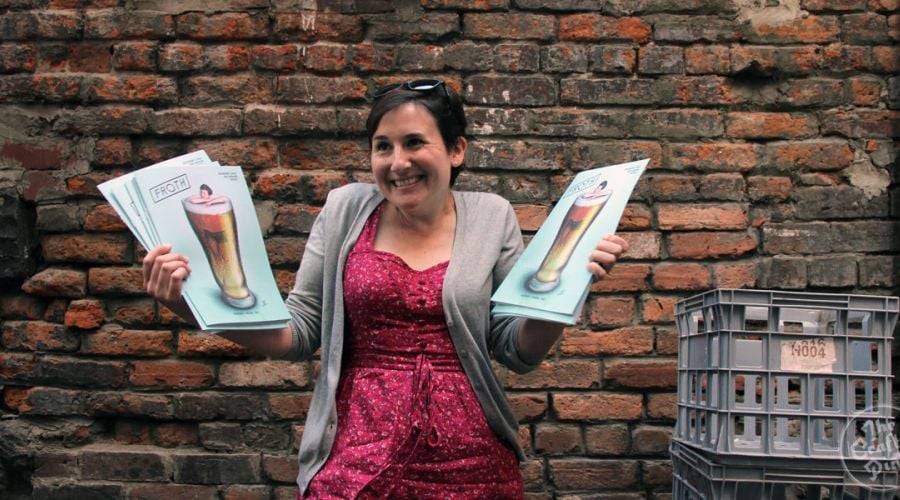 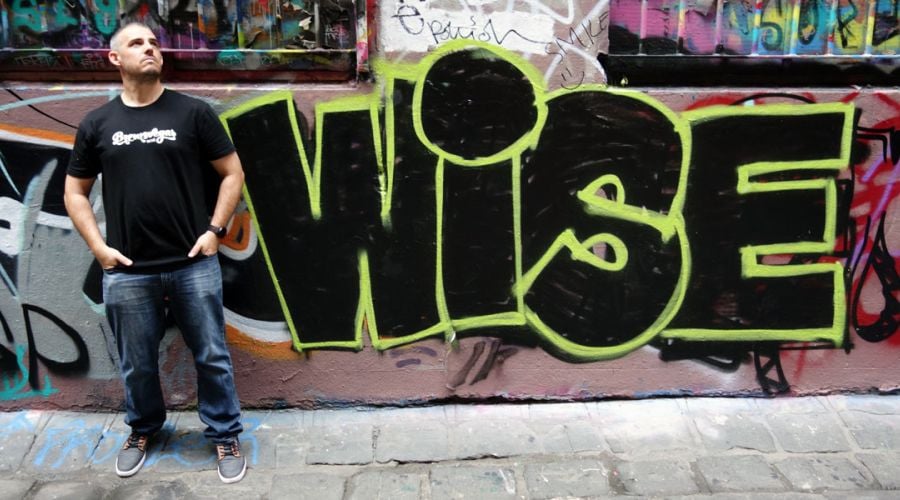