The beer scene is booming in South Australia. Recent years have seen an explosion of new brewing companies – big and small – and there is a growing number of venues supporting them.

Crafty Pint SA Matt King gathered a panel of beer aficionados (all bearded, of course), who together drew up a list of ten of the best new beers to come out of the state this year for what is part two of our state by state 2015 roundup. You can read part one on Tasmania here and look out for the others to follow.

You can also vote for your top beers of the year in the GABS Hottest 100 Aussie Craft Beers poll here.

More than 85 beers from 16 different breweries were launched in South Australia in 2015, from brand new core range beers to barrel aged creations and beers that were brewed just for festivals. The final top ten came from just six of those SA breweries and is listed below in no particular order. There were so many delicious brews created in 2015 that it was an extremely difficult mission nutting out which ones deserved a place in the top 10.

The South Australian tasting panel (pictured below) consisted of Aidan "The Beard" Galpin, Chris "Fu" Rumere and the author of this piece. Aidan is a regular at most craft serving pubs in SA and had tasted a large majority of the newly released beers for 2015. Fu is the new SA sales representative for Hawkers Beer and is a self confessed beer nut who most certainly knows his way around a good beer.

And here's what we came up with... 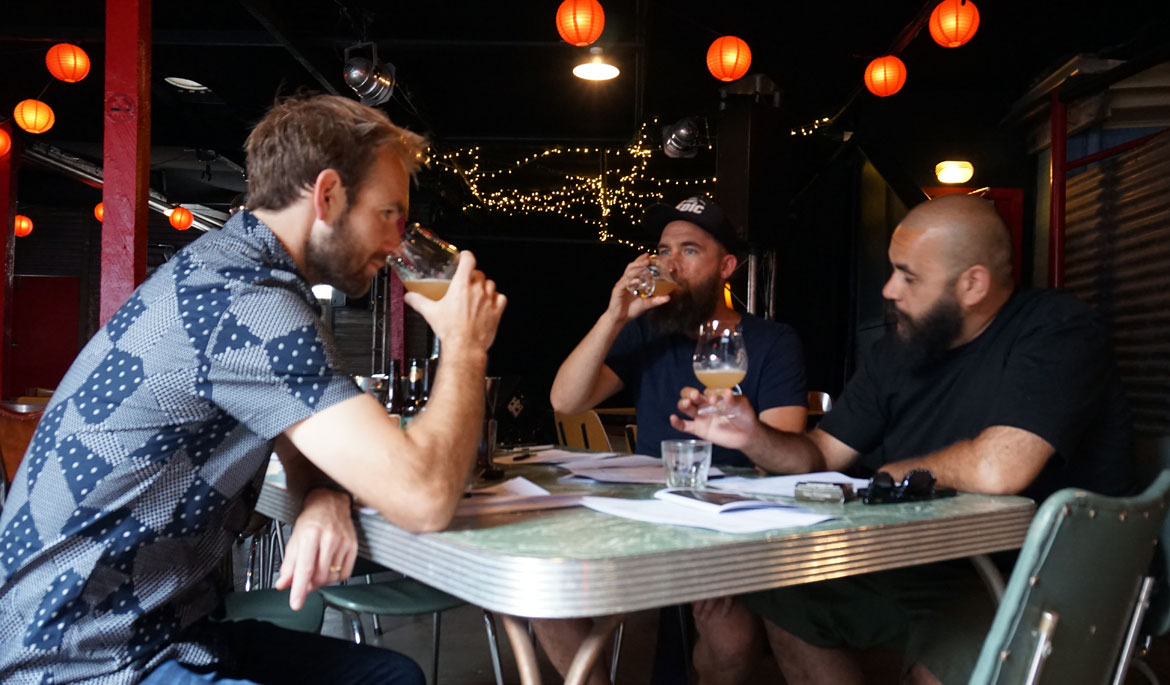 Pirate Life burst onto the craft beer scene in a big way in 2015, launching their beer across the country in quick succession. Their Pale Ale is slightly darker in colour than most local pales, with initial aromas that consist of the Pirates' two favourite hop varieties: Cascade and Mosaic. They may well have contributed significantly to the 2015 Mosaic hop shortage, due to the large amount they use in their beers. A big, thick, full bodied pale ale with hops screaming out at you through the entire experience. A perfectly balanced beer that has hop heads searching for more.

Nothing about the Pirate Life’s double IPA is small: it comes in a big 500ml tin, boasts a big 8.8 percent ABV and big flavours and hop aromas. Again, it's a perfectly balanced beer with just the right amount of sweet malts, hop flavour and lingering bitterness. Despite this, CEO Michael Cameron believes the double IPA can be drunk at any point in the day: breakfast, lunch or dinner. They use American hops again, with Mosaic, Centennial, Columbus and Simcoe showcased in the beer. At 120 IBUs and with a sizeable alcohol percentage, this one is not for the faint hearted but is definitely worthy of a top 10 place.

The Mismatch Extra Pale Ale is described by brewer Ewan Brewerton as a beer somewhere between a pale ale and IPA. It has the full malt flavours and hop aromas of a big IPA but the more subtle bitterness of a pale ale. The tasting panel all agreed that the XPA had a delicious aroma, with sweet caramel notes and citrus fruit aromas throughout. The XPA adds another solid beer to Mismatch’s core range and appeared in bottles as of late 2015.

Despite only starting to brew their own beers in 2014, the Wheaty's Brewing Corps has already created a large portfolio of tasty brews. Originally the "Corps Promise" was to be the only recipe that was not to be altered, touched or messed with. But, as the saying goes: “rules are made to be broken” and that's what happened here. A 7.2 percent ABV rye IPA, which consists of the same malt and hop bill as the Corps Promise except with a lot more of everything. A perfectly balanced IPA with tropical fruit aromas bursting out of the glass matched with an easy sweetness that lingers on the tongue and a dry, piney hit to finish. 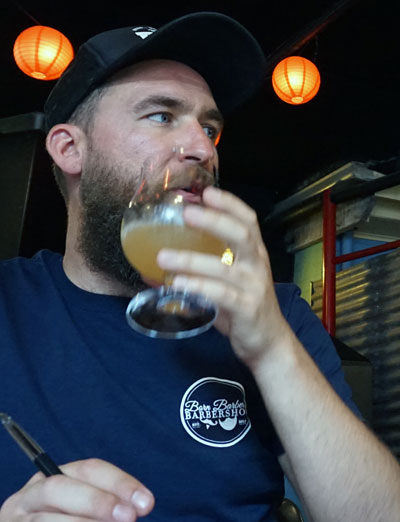 A complex saison style sour brewed with the assistance of Scott Overdorf from Moo Brew in Tasmania. A sour banana beer might not sound all that appealing; however, this is no ordinary beer. The Saison Sour experience all starts with a subtle banana aroma (it's no banana bomb), a super fresh lemony, zesty foretaste, followed by a mellow sour aftertaste and a dry finish that leaves the mouth wanting more. A kettle souring brewing process kicked things off with the brew completed with the assistance of a French saison yeast and some Lactobacillus.

Quite possibly the cleanest Pilsner on the local market today and one that has now has become part of the regular range due to its huge success. Another collaboration for the Wheaty Brewing team, this time the beer was first brewed with Dave Bonighton from Mountain Goat. A spicy German style Pilsner, it was brewed with new world hops Helga and Pacifica, both derived from the noble hop Hallertau. The end result is an easy drinking spicy, bitter pils that will definitely be a go to for many drinkers come the warmer summer months. It has also sparked variants featuring different malt varieties.

The Kriek style is not one that's regularly brewed in Australia and only few breweries have attempted such a beer. It's one that is traditionally made with a lambic that is then blended with sour cherries and aged in barrels.The 2014 vintage Cherry Kriek from Pikes Beer Company in the Clare Valley is one that's smooth and complex. The delicious sour cherry aromas bound out of the glass and invite the drinker to explore further. It's also very sour but with each element working together perfectly in a beer that's balanced beautifully. After taking one sip, a member of the tasting panel quoted the great Ron Burgundy: “I’m impressed.”

Big sweet, piney malts and an addictive lingering bitterness, the Californicator is inspired by West Coast IPAs and has made the top 10 for two reasons. Firstly because the beer itself is bloody tasty and addictive but also because the label’s artwork is amazing: thought-provoking and funny. The massive hop hit of the Californicator could even be compared to an energy drink, as just one sip can be likened to a slap in the face. Even though this colourful West Coast IPA has huge flavours and 70 IBUs, it is well balanced and delicious.

The Barossa Valley Brewing’s 3 some could be quite difficult to order at the bar without receiving a few odd looks from the bar staff. However, during the hot summer months ordering a glass or two of this brew is exactly what you would want to do. The 3 some is described as a “complex summer smasher” by the tasting panel, as it is incredibly refreshing, light and full of flavour. The base beer starts as a German Hefe, with two different Barossa Valley white wines then mixed in to create the fuller flavoured mouth feel and dry crisp finish. A carefully selected Semillon from Darren Lehmann was added with a Viogner from Tobreck Wines completes the picture.

The Wheaty Brewing Corps Black Lime Gose takes the drinker through an exploration of flavours. It starts off with a wheaty banana aroma and foretaste before advancing onto an easy salt hit with a tad of tart sour flavouring, which is all counteracted with a balanced bitterness. This gose is brewed slightly differently to most traditional German ones. Instead of using Lactobacillus to supply an acidic, tart finish, head brewer Jade Flavell used Black Limes that had been boiled in salt brine and sun-dried for several weeks. The end result is a balanced, flavoursome beer that is equal parts refreshing and delicious.

The good beer scene in South Australia has really expanded in 2015, with numerous new breweries firing up their brewhouses for the first time and an array of exciting beery creations hitting the market both locally and interstate. It is an exciting time to be involved in the craft beer scene in South Australia so, on that note, "Cheers!" to an outstanding 2015 and "Best Wishes!" to everyone for an even better 2016.

So what do you make of the list? Have you tried and enjoyed these beers or are there other new releases you think should be there, such as the launch beers from Fox Hat or one of Prancing Pony's many limited releases? Despite the bushfires and the pandemic, SA's craft beer industry continued to grow in 2020. With the support of dozens of industry experts, here's Matt King with his look at the year in beer in South Australia. read on