It’s a real family affair for the latest brewing company to arrive on the rapidly expanding scene in Tasmania. Run by a pair of husband and wife teams – Klimt and Domonie Donohoe and Michael and Marnie Rybak – and named after the two families’ Dalmatians, Spotty Dog Brewers launched their first beer at Preachers in their home town of Hobart towards the end of 2015 after years of planning.

The idea that became Spotty Dog was sparked when Klimt and Michael – friends but also brothers-in-law as Domonie and Marnie are sisters – were travelling around Europe. Much of their time was spent sitting in bars, discussing their own dreams of opening one, and realising that their visions were well aligned. But it was not until a second holiday in South America that their plans became better formed.

But it was while enjoying an evening of Argentinian craft beer – with the duo lamenting the fact that they couldn’t get anything similar in Tasmania – that they decided that upon their return they would try to recreate the flavours of that brew.

Over the next five years, Klimt and Michael brewed a new batch of beer every few months and shared it among family and friends; the response was always positive. They also began producing American style barbecue food like ribs and pulled pork, and it was with their food rather than their beer that Spotty Dog launched at the Hobart Twilight Market in October 2014.

“We applied for a stall with no real experience in catering or hospitality,” says Klimt (pictured top right). “We were just a small team; our wives helped out, our parents sometimes had to help out. But the food went down really well. 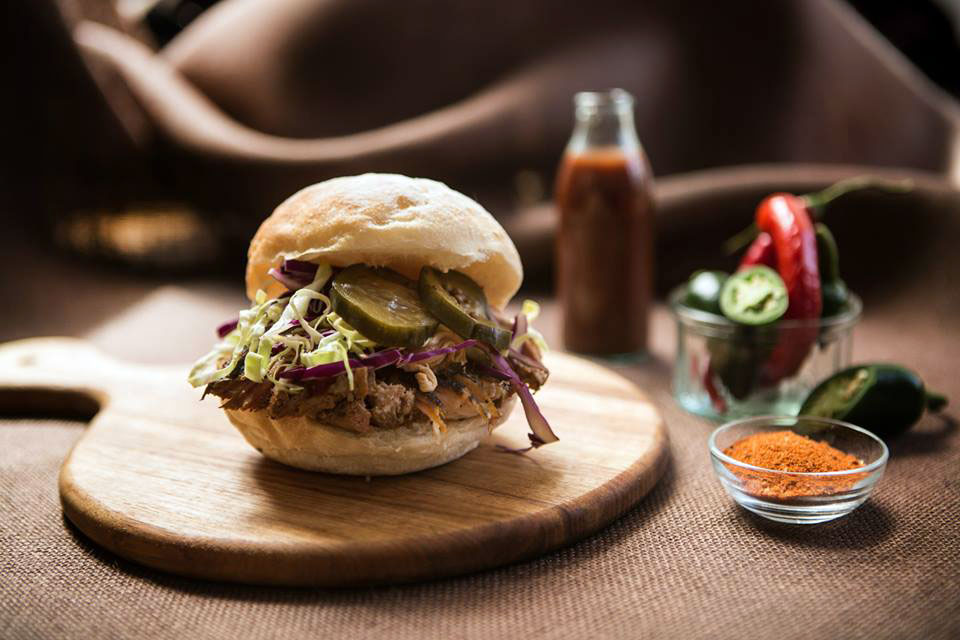 "We were making things like Cape Grim brisket, fried chicken and pulled pork that we’d smoked ourselves using hickory and oak. We served the food alongside local beers like Van Dieman, who we saw as sharing our values.”

It still took a further twelve months following the launch of their food stall for Spotty Dog to step up the brewing side of Spotty Dog to a bigger scale. They visited several breweries around Tasmania trying to find the right people and premises and, while Klimt says there were a number of places at which they could potentially have worked, it was with the team at Last Rites in Cambridge that they developed the strongest rapport.

“We’ve got a great working relationship with the guys," he says. "The Last Rites head brewer Phil Zakaria always supervises the process when we’re using the brewery, and we’re learning so much from him.

"We always take a single keg from each batch and dry hop it separately, so we’re having a lot of fun experimenting.”

The first beer they launched last November was the Summer Pale Ale (pictured below), inspired by the American West Coast style beers they love, albeit toned down somewhat to suit their tastes.

"We want to produce session beers," says Klimt. "With the Summer Pale Ale, we wanted it to have some familiar flavours for people who weren’t already into craft beer, and we wanted it to have that beautiful amber glow in the glass. When we were brewing, we imagined ourselves sitting outside in the beer garden at Preachers, with the sun shining and the ale literally glowing in our hands.”

The beer was intended to be a one-off product, but already they're onto their fifth batch.

“We like to serve the beer really fresh," says Klimt. "If we keg it on a Friday it’s usually all out within a week or two, and we hand deliver each keg to venues around the Hobart area.” 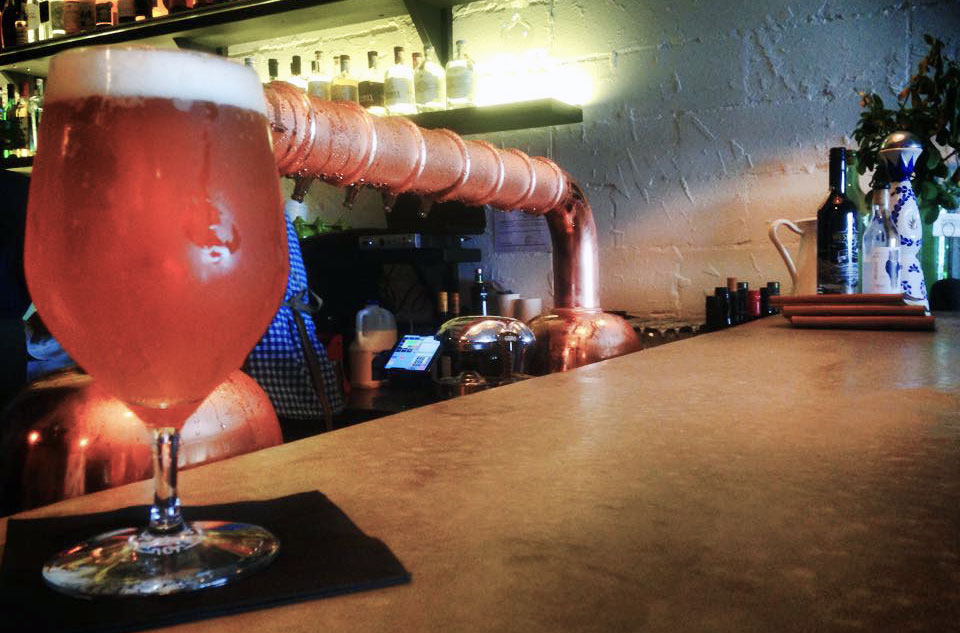 To date, the beer has been pouring at their stall at Hobart's Twilight Market, Preachers, Society Salamanca, and Pancho Villa, plus Robbie Brown’s in Kingston, while Spotty Dog are also working on limited edition releases with Small Fry restaurant. The plan is to follow up the Summer Pale Ale with an IPA this month; also in the works are double IPA collaborations with Last Rites and the newly launched brewing arm of The Winston.

Longer term, Klimt says that there are plans for a Spotty Dog brewpub brewing small batches of five to ten kegs to serve alongside their food.

“As well as running it as a pub, we’d love it to be a place where people could come to learn about beer. We’d like to do tours when the brewer is actually brewing to teach people about the process. Maybe we could do some gin classes too, and bring in some bartenders to help people experiment with different botanicals.”

Aside from fulfilling their original dream of running a venue, the proposed brewpub would give them somewhere to put the half tonne, custom built smoker that is currently residing at Klimt’s house.

“It’s beautiful and awful in equal measure," he says. "The results with the food are great, but it definitely stinks out the neighbourhood when we’ve got it going!”

Klimt is hopeful that, as they expand, Spotty Dog will be able to maintain its "Family brewed – family owned" ethos. Certainly, they've not been afraid to keep things close to home; when they needed labels designed for their bottles, Klimt approached his wedding photographer, Rosie Hastie, and she has since become their graphic designer and general style adviser.

The downside of keeping things tight can mean a shortage of numbers. At the last Twilight Market of 2015, a combination of pregnancy, work commitments and dance injuries in the core team meant the Spotty Dog stall had to be staffed by Klimt alone. He found a workaround, though: food was off the menu, but the Summer Pale Ale still flowed freely.

Clearly a man with his priorities straight. 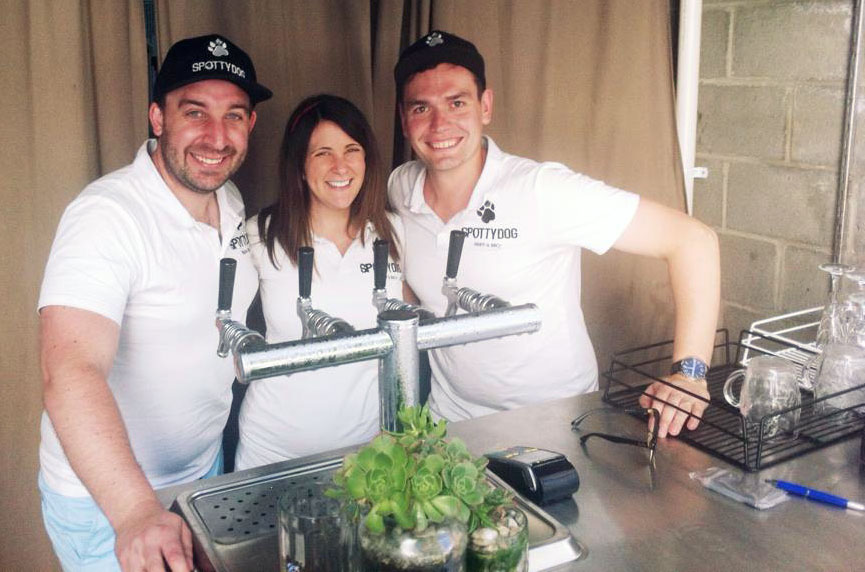 Keep tabs with all things brewed, smoked and Spotty via their Facebook page.