A man who knows a bit about hops and brewing has launched a new brewing company with a mission to educate drinkers about hops. Owen "OJ' Johnston was head brewer at Hobart's Moo Brew for years before joining Tasmania-based Hop Products Australia (HPA) in a sales and marketing role that involves advising brewers on which hops to use and how best to use them in beers.

Now he's stepped out of the office and back into the brewery – his old haunt at Moo Brew, no less – to launch Hop Trial. OJ’s first release is an American style pale ale using HPA's Ella hop that isn't just designed to give drinkers a tasty beer to enjoy but also comes with more detailed information about the particular batch of hops and how exactly they were used in the beer. The idea is that, over time and with subsequent releases, people will be able to understand more than just the difference between one hop variety and another – they'll be able to see how using them in different amounts and at different times in the brewing process can change a beer too.

After a few years away from the brewery – at least in terms of actually brewing – OJ is happy to be back doing what he knows best.

Since Moo launched ten years ago, the craft beer industry has grown steadily in Tasmania before accelerating at an incredible rate in the past year or so, and OJ is well aware that more breweries mean more competition. But he also believes the development of an educated and enthusiastic beer drinking community provides an opportunity to experiment.

With that in mind, the focus at Hop Trial is less about gaining large scale coverage, more about starting a conversation around what goes into a product: the differences that a small change in ingredients can make, and how best to communicate that to drinkers.

“I’m going for consistency with the base malt," says OJ, "using a pale ale because that’s very accessible and easily understood, and the differences of hop will be apparent. Then I’ll always use a single hop at a time; for this first batch of I’ve gone with Ella from HPA, which I hadn’t used before.

“The thing I’m doing that’s different is not in the beer making process, it’s the information that’s presented at the forefront of the communications. The tap badge, as well as showing the ABV [alcohol by volume] and IBU [international bitterness units] also shows the amount of hops is in the product.

For anyone wondering what the hell he's on about, IBUs or international bitterness units are the measure that's commonly been used to indicate hop content in a beer. But it only focuses on one element – the amount of bitterness that should be in a beer due to the amount of hops used. And, depending on when the hops are added and how well balanced a beer is, it can be a little misleading. You could have an out of balance pale ale with only 20 IBUs that tastes astringently bitter or a fantastically well made double IPA with 80 IBUs that has lots of hop flavour but a bitterness that's well contained.

As for whirlpool and dry hop, the former refers to a part of the brewery into which beer goes after it has been boiled in the kettle and is often where brewers add hops. As it is late in the brewing process, the hops added here should contribute mainly flavour and some aroma derived from their essential oils. Similarly, dry hopping is the process of adding hops once the beer is inside its fermentation vessel; here the main impact will be on aroma. Bitterness is gained predominantly by adding hops early in the boil, when essential oils are burned off and alpha acids provide most of the beer's bitterness.

"This first Ella release has 6.0WP and 4.0DH, and that information is right up there on the tap," says OJ. "Perhaps for a second release I can pull back on that dry hopping and help drinkers to understand the difference it makes when you add at different stages. What makes a beer aromatic? What makes it taste tropical?”

The other key difference when you’re looking at the information provided on the periodic table like tap decals for one of OJ’s products is that his measurements refer to the oil content of a hop (millilitres of oil per hectolitre) rather than the weight (grams per hectolitre) because he believes this leads to greater understanding of how they work.

“If you [as a grower] have a poor season, or you’re subject to some kind of natural agricultural fluctuations, it can have a big impact on the quality of the hop," he says. "You can have the equivalent weight of two batches from two different years, but if there’s one year with a high oil content and another with low oil content, then the beer you make with low oil content hops will suck.

"If we start referring to the oil instead of the weight then we can start making much more meaningful comparisons.”

In his own inimitable style, OJ is at pains to emphasise that it’s not a revolutionary idea.

“I’m not shooting lightning bolts out my arse to completely change the world of brewing,” he says. “It’s more about refinement within existing processes.

"Newer entrants in brewing are already publicising in much more depth what their products contain, and even if you wanted to keep your ingredient list secret it would be pretty hard when there are professional tasters who could probably have a drink and pull it apart in a few minutes. But it leads to the question of whether you can influence your market by educating them.”

One of the main reasons OJ is keen to have Hop Trial beers available as keg only is because he believes the social element of pub life is what helps these conversations take place.

“I have to rely on venues to explain the back story of the beer, and that’s hard because by their nature bar workers can be quite transient. But by choosing venues that care about craft products, speciality outlets that are already catering to drinkers who are well educated about beer, I think that’s giving me the best chance of success, both in terms of committed staff and likely audience.”

He is hopeful that the discussion around communication and presentation of information that the Ella Pale Ale has started is just the beginning of a process.

“I’m really keen to get feedback, both from drinkers and from other beer professionals," he says. "It’d be great to know what people think of the units, and whether it helps people understand what they’re drinking.

"Maybe it’d be possible in future to release two beers at the same time with just a slight variation in hops, and let people taste the difference with the information right in front of them. I just want this to be the start of a conversation, so I’m open to suggestions.”

It promises to offer another level of education around hops that builds on past and ongoing single hop series in which brewers, such as Bridge Road with its IPA series, use the same base beer but with a different hop variety each time. What's more, given OJ's past successes at Moo Brew, creating one of Australia's first barrel-aged imperial stouts and innovative beers like the Belgo, it's exciting to have one of the country's best and most knowledgeable brewers back in the brewery, even if it is just a bit on the side from his day job.

You can keep tabs with Hop Trial via its Facebook page. 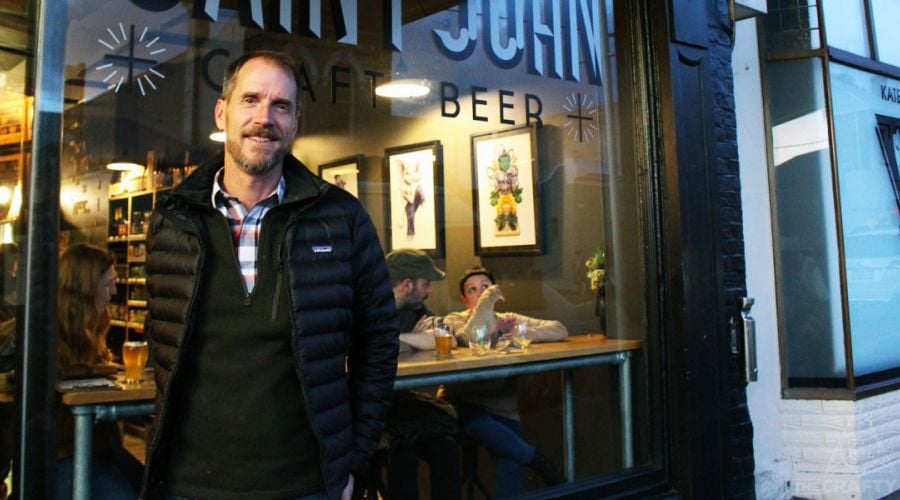 Dr Tom Shellhammer is a world-leading expert in hop chemistry helping brewers understand how better to use hops. We caught up with him in Tasmania as he gives a series of talks in Australia. read on It took years for Ty Capaci to convert wife Amanda to the benefits of his home brew. But he did such a good job, they've now opened Double Head Brewing together, adding yet another microbrewery to the Tasmanian beer scene. read on