As those of you who frequent the interwebs and read the weekly Crafty newsletter may have ascertained, there is in existence a body going by the rather grandiose name of the Australian Beer Writers Guild. I use the term grandiose as the Guild has been, to this point, little more than a fairly loose affiliation of people who have met five times in pubs and bars to talk about beer over good food and several beers. Its members do, however, all write about beer, whether in the form of half a dozen blog posts a year, a record of their adventures in homebrewing or paid for beer journalism. And, as of last week, the Guild has been formally incorporated. So it’s serious. Well, beer serious anyway.

So what’s it’s purpose? The one definite is that it’s an excuse to head to a beer bar once a month to meet like-minded souls. Other than that, it’s a work in progress. Suggested initial aims included using the ABWG:

However, it could end up doing the above and all, some or none of the following if the last meeting at Josie Bones is anything to go by: 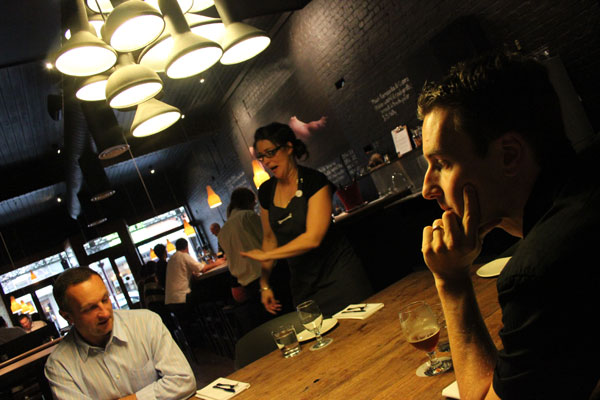 Even if it becomes nothing more than a number of affiliated groups around Australia meeting to enjoy and discuss beer on a regular basis it still serves a purpose. And, as the craft beer industry continues to grow in Australia but still faces considerable obstacles to its successful growth the more people writing – and writing well – about it can only help. Thus far, with the idea germinating in Melbourne (courtesy of eat, drink, stagger), it’s a Victorian thing. However, there are people in NSW (beermen.tv), Queensland (Australian Brews News) and Adelaide (Here For The Hops) among others who have expressed an interest in kicking it off elsewhere.

So, if you like to write / blog / film yourself talking about beer, live in Australia, and would find it amusing to tell people you’re in something as pompous-sounding as the Australian Beer Writers Guild, then get in touch with newly appointed ABWG secretary James Davidson at james.davidson@brewsnews.com.au. He’s set up an online forum for members while a website for aggregating posts is in its very early stages (so early, in fact, that the image at the top is a man walking down a misty lane with nary a beer to be seen).

If you’re in Victoria, the next meeting will be held on a date between March 22 and 24 at a venue in Melbourne that’s yet to be decided. If you’re elsewhere, why not add the details of your blog or site to this article so others can find you? In the meantime, I’m off to find out what the role of President entails…