Judging by the rumours flying around last month's Australian Craft Brewers Conference in Brisbane, if 4 Pines said they had an announcement to make it was only going to be one thing: they'd been bought by a multinational brewery. Which brewery exactly was doing the buying and how much they were paying changed depending on who you asked; what was certain was that it was happening.

It put the significant investment 4 Pines has made at its main Brookvale brewery – as well as the prominence given to the company's independent, family owned status on its labels – into a different light. At least until you did what we did: asked the boss.

To summarise the conversation, the latest rumour meant they only had to sell to one more of the big guys to have been bought by all four major players in the local market. More pertinently, there was nothing in it but, just to stoke the flames of the fire: "Why not tell people you couldn't get hold of me as my out of office says I'm on a family holiday in Japan?"

While Stone & Wood, following Mountain Goat's sale to Asahi last year, and Rocks Brewing, following the most recent bout of rumours (at which it was "4 Pines or another NSW brewery" that had sold), have put out statements clarifying they have not and will not be selling to a multinational, 4 Pines has said little – aside from a humorous Instagram post the day after the Craft Beer Awards. On the back of today's news, perhaps that's because they've been too busy to bother.

Instead of an announcement of a global nature, it's one that's rather more parochial: starting in Spring, they will be opening three new and distinct venues around Sydney's Northern Beaches. First will be a dining venture directly below the Manly brewpub where they first set off on their adventure. Following that – on December 1, they hope – will be a dedicated barrel-aged beer bar in Newport. And, sometime in 2017, there will be a new venue incorporating a bakery at the Glen Street Theatre in Belrose.

"We've been tapping away for a year," says 4 Pines' in-house publican Ged Dore.

4 Pines started out as a hospitality operation at its Manly brewpub before phenomenal growth saw focus switched more to the brewing side, with significant expansion of and investment in the main Brookvale production facility occupying much of the owners' attention in recent years. But, says Ged, who was brought into the business after turning around Manly's Steyne Hotel, the hospitality side was always going to come back to prominence.

"We came back to it when we were on the West Coast of America on a craft beer trip, living and breathing beer in its heartland," he says. "We'd come upon these simple places [Pizza and Port outlets in San Diego] after our morning swim and surf. We were rating places as hospitality venues and, after speaking to the staff, these places got five out of five."

Thus, having considered many options for new 4 Pines venues, including Melbourne, they realised they loved the Northern Beaches and wanted to focus there instead.

"It just kept calling us back," says Ged, adding that the three new venues, when open, will form a triangle throughout the area.

First to launch is the easiest for them. They have taken over the former Out of Africa site directly below their Manly brewpub and will open Manly Underground, a 100 capacity eatery open for breakfast, lunch and dinner seven days a week offering "a step away from the pub-focused dishes from their upstairs counterpart, with more of a produce-driven and seasonal menu".

It's the second venue that will probably excite most Crafty Pint readers, however, as brewer Garrett Sherman (pictured top left with 4 Pines chef Rob de Paulo) gets an entire bar at which to indulge his passion for barrel-aged beers. On a past visit to Brookvale, we were shown a couple of barrels that had been tucked out of the way of main brewery operations on a platform; they seemed to be there, as much as anything, to keep Garrett happy. At that point in time, a barrel program was not part of the brewery's thinking.

However, says Ged: "Garrett is a quite determined young man."

Thus, when brewery founder Jaron Mitchell initially said no to developing barrel-aged beers, Garrett "started a guerrilla barrel program and was quite amazed when this [Newport venture] came up.

When it opens in December, the intention is to have a "formidable program" of beers aged for between six and 24 months in whisky and wine barrels on offer. What's more, the brewery has three foeders, large oak vessels designed for ageing beer, coming too.

The final piece of the jigsaw for now is the Glen Street Theatre venue. 4 Pines Belrose will be open from brunch to dinner, making its own bread on site and hoping to offer something to locals, theatre goers and those using the neighbouring sports pitches alike.

"We've always been playing with the bread concept at the big brewery," says Ged. "If we roll out breweries in other states, we want a concept that works."

For now, interstate breweries are one option being discussed as they explore how far they can take expansion at Brookvale – "long term plans and dreams," as Ged puts it.

As for the future that was rumoured last month, one in which 4 Pines has become an acquisition of a far larger brewery, he says: "We've always said internally that Jaron's son will be the one to make that decision when he's 21."

Given he's only five now, it looks like any prospective buyers still have a while to wait. 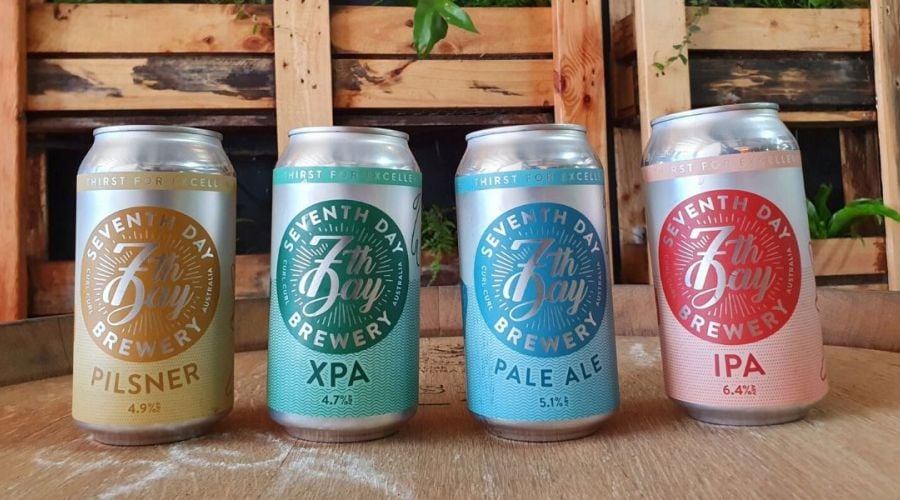