Gypsy brewing – the concept of using someone else's brewery to make beer, rather than pouring a sizeable amount of capital into building your own brewery – has become increasingly popular in Australia in recent years.

Once upon a time, alongside contract brewing, it was looked on as a slightly questionable practice that allowed people to buy their way onto a beer shelf without having much skin in the game or, in some cases, physically brewing a beer themselves. But the proliferation and success of several gypsy brewers from respected brewing backgrounds, not to mention some top notch beers, has turned it into a perfectly legitimate way to run a business – this year the Australian International Beer Awards even gave out its first dedicated Gypsy Brewer trophy (won by BrewCult).

As more and more people follow the gypsy path – whether it's to scale up a successful home brew recipe, get a brand going while a brewery is being built, or simply as an outlet from a non-beer day job – gypsy brewing seems to be coming of age. In some ways it's going full circle as several brewers from established breweries are eyeing it up as a way to launch creative side projects quite separate from their main brewing job.

That's partly the case for Bounty Hunter Brewing, the new project being launched out of Western Sydney by Dan Shaw, Head Brewer at The Australian Brewery, and his longtime friend Chris Sincek. Here they are as the latest in our Who Brews?... series to tell us about their pop and geek culture inspiration, epic artwork and why the recipe is the last thought in the creative process. Based in Western Sydney, Bounty Hunter Brewing is getting ready to launch and will start firing out craft beers with powerful flavours that draw inspiration from our favourite genres of cinema, gaming, comics and heavy metal, presented with awesome artwork aiming to tell a different kind of beer story.

Officially, Bounty Hunter Brewing is made up of Dan Shaw (Head Brewer at The Australian Brewery), and Chris Sincek (Service Desk Analyst for Ethan Group). But we are not alone. What started as a WhatsApp chat between us and long time mate Peter Bainbridge and Chris’ brother Mark Esposito (who coined the name Bounty Hunter), the concept of starting a brewing company materialised with little effort to produce some great ideas. The four of us remain a solid think tank who share similar interests and now find ways to align those interests to develop beer concepts.

We’ve also been very lucky in sourcing the amazing talents of visual artist Brad Bishop of Brad Bishop Creations to turn our concepts into reality through his brilliant artwork, and graphic designer and branding specialist Jarrod Fuller of Zendoke, who has managed to amalgamate all our ideas into an awesome brand package that demands to be noticed.

Finally, the moral, business, accounting and IT support provided by Jarrod Wilson, Laurie Shaw, Louise Shaw and Adisty Said have been invaluable and we wouldn't have made it this far without them. They've kept us sane, organised and grounded during the whole start-up process.

Everyone mentioned has worked hard to make all the pieces fit and share the credit of who we are.

To bring something to the table that goes beyond just brewing.

The recipes are the last piece of the puzzle when coming up with a concept. Our creative process is the reverse of what most breweries would do. We choose a theme from a pool of pop and geek culture we really dig – be it cinema, comics, gaming or music – base the name of the beer on an element from that theme, maybe a quote, character or some other reference, then we build the beer style and develop the recipe around it. Finally, we design the artwork to showcase the whole package. Our first two launch beers are a good example of this.

The War Rig is the vehicle operated by Imperator Furiosa from Mad Max: Fury Road. The beer is designed to incorporate elements from these characters and from the cinematic world in which it takes place. The 8 percent ABV represents The God of the Cult of V8 in our smoked Belgian chilli chocolate ale, grease black in colour with the smoke and chilli depicting arid, petrol fuelled wastelands. The warlord Immortan Joe is revered as a holy man, hence the Monastery ale yeast and the cocoa nibs would have been grown in his bio dome for his prized “Five Wives”. The artwork was developed to convey the mood and character notes, an imposing machine moving at full throttle through the extreme desert environment, pluming exhaust fumes and smoke in its wake.

The Solo Contract came a little easier. Paying homage to the king of all bounty hunters, Boba Fett, and what he'd be drinking in his down time, reflecting on his efforts that led him to finally catch Han Solo before returning to The Dune Sea to cash in. We wanted a lighter ABV beer which contained only a solo malt and a solo hop. Naturally, this concept spawned the Single Hop XPA. The artwork depicts our very relaxed Bounty Hunter enjoying an XPA after a successful catch.

We brew to present these stories we love using the medium of art and beer.

What’s the inspiration behind the brewing company name?

Growing up, movies, comic books and games were a massive influence. Many of our favourites contain a Bounty Hunter: Star Wars’ Boba Fett, Blade Runner’s Rick Deckard, Clint Eastwood’s Man with No Name and Metroid’s Samus Aran to name a few. These Bounty Hunters often work alone and have their own code they live by. They achieve so much with very little resources and they do things their way. They need to think outside the box if they intend to succeed in a business where you're only as relevant as your last catch. That concept resonates with what we are doing. That and we thought it sounds cool!

Dan: I was lucky enough to have known the right people at the right time to get into the brewing industry. I had previously run a hotel for the owners of The Australian Brewery and must have made a good impression as they took me on as the assistant brewery in 2010 with little to no experience. At the time I wanted to move out of the liquor retail sector, do something more fulfilling and study something interesting that I could build a career on.

Having worked in hospitality and liquor retail for ten years, I was always trying different beers. After my first Little Creatures Pale Ale back when I was 20-something, I realised there was much more variety of beer out there than what I had seen in the market previously. This started me down the path forever dominating my destiny.

Dan: Not much – a single Nogne Ø Chaga stout. Time for a re-stock!

Dan: Without a doubt Panhead Quickchange XPA in cans. Just because you’re on a desert island doesn’t mean you can’t be good to the environment and drink from cans!

Chris: I hadn't spoken to Dan about this one so it’s kinda funny. I love anything red. It's tricky to find these days but it'd be Panhead’s Johnny Octane red IPA. I think the artwork across the Canhead series is pretty rad too.

If your brewing company was a band, what band would it be?

Dan: A melodic Death Metal band with strong vocals, epic riffs, solid blast beats and heavy story telling elements reminiscent of power metal. All balanced together into something Dio would have been proud to have listen to alongside Johan Hegg.

Chris: The versatility with our brand and concepts allow for genre hopping. Following on from Dan, I'd say we could be Rob Zombie: concept driven with great story telling, groovy beats and crunchy riffs paired with electronic undercurrents presented in a psychedelic framework that screams for attention and cannot be ignored.

Ten years down the track we still hope to be gypsy brewing [they currently brew out of Hope Estate in the Hunter Valley], but own our own bar where consumers can experience the brand as we've envisioned it. We believe we have a lot to offer the market and have plenty of ideas to fill a void tailored to guys like us. But we will keep that under wraps for now...

Keep an eye on local craft beer bars in late October as we will be launching just before Sydney Craft Beer Week 2016.

Find other articles in our Who Brews?... series here. 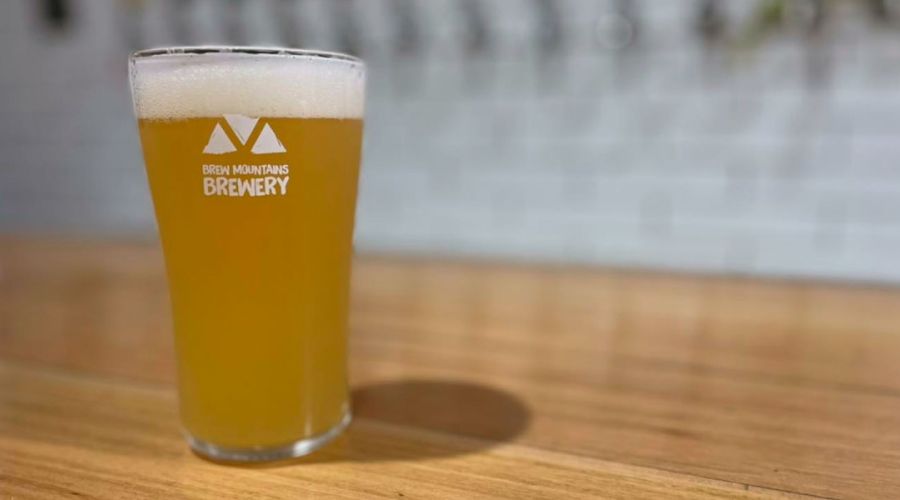 Watching his grandad brew fired a lifelong fascination with brewing for Craig Talbot, so he quit the commuting life to launch Brew Mountains. We invited him to take part in our long-running Who Brews...? series to find out more. read on